Intern Patri O'Gan shares a unique story of woman suffrage for Women's History Month in the final installment of the "Traveling for Suffrage" series. Read previous posts in the series, including part one, two, and three. 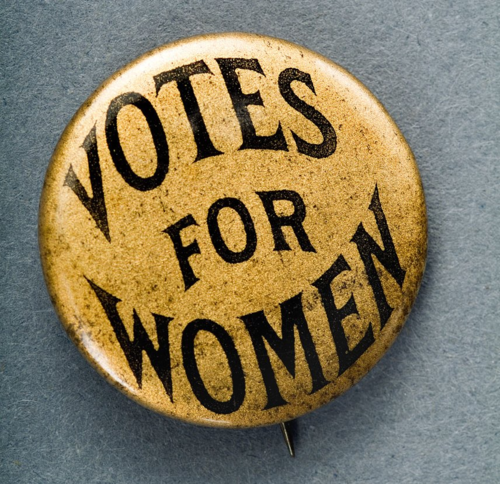 By the decade leading up to the 1920 ratification of the 19th Amendment, woman suffragists had been fighting for the vote for over 60 years, and some felt the movement was languishing. Before television, the Internet, and social media, how could suffragists garner national attention to help revitalize their cause? For some suffrage strategists, the answer came by train. 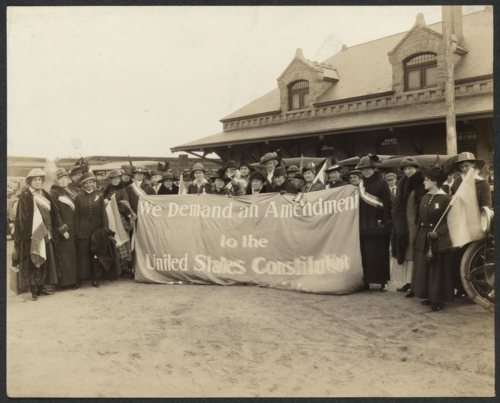 Suffragists on the Suffrage Special train arrive at the Atchison, Topeka, and Santa Fe Railway Company Depot in Colorado Springs, Colorado, 1916. Courtesy of Women of Protest: Photographs from the Records of the National Woman's Party, Manuscript Division, Library of Congress [mnwp.160081].

In April 1916, at the same time that Nell Richardson, Alice Burke, and their cat Saxon were driving their Golden Flier across the country, 23 members of the Congressional Union for Woman Suffrage (CU) boarded their own "Suffrage Special" train at Union Station in Washington, D.C., for a five-week tour of the Western United States. Their mission: to recruit women voters in the West. 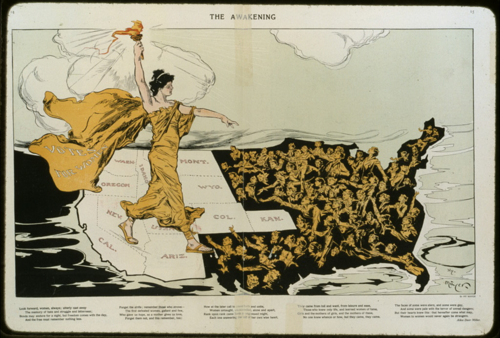 Although illegal on the federal level for women to vote, the federal government saw woman suffrage as a state issue, so individual states could pass legislation granting women in that state the right to vote. By 1916, the only states to have passed legislation enfranchising women were in the West, including Wyoming, Colorado, Utah, Idaho, Washington, California, Arizona, Kansas, Oregon, Montana, Nevada, and Alaska (still a territory at that time). As voters, women in these states had a power that was denied disenfranchised women in the East—the power to influence a Presidential election in favor of woman suffrage. The Suffrage Special tour set out to recruit these Western women voters to use their political power to campaign for a national suffrage amendment. 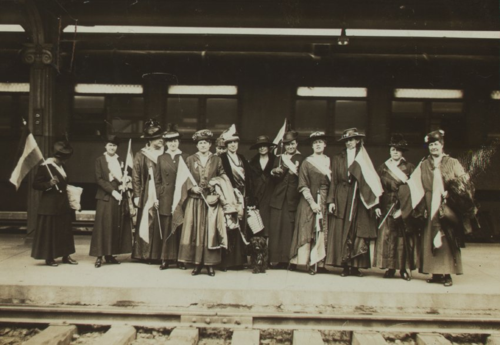 The Suffrage Special train tour returning to D.C., 1916. Courtesy of the Sewall-Belmont House & Museum, home of the historic National Woman's Party. Note the train tracks in front and the train in the background.

When the Suffrage Special train and its newly-recruited Western delegates arrived back in Washington, D.C., in May 1916, they staged an automobile procession from Union Station to the Capitol to present their petition to Congress. The Senate officially recessed in order to receive the delegates in the Capitol Rotunda.

The following month, at the Woman's Party Convention in Chicago, these same Western delegates voted to establish the National Woman's Party (NWP). Touted as the world's first women's political party, the NWP would use the power of women voters to influence elections and campaign for a national woman suffrage amendment.

Trains were again utilized by suffragists in possibly the most powerful use of travel to further the woman suffrage cause: The Prison Special Tour of 1919. 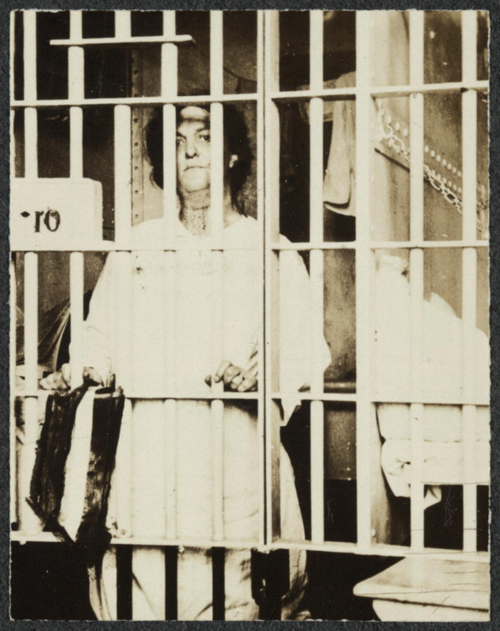 Suffragist Helena Hill Weed, jailed three days for carrying a banner reading, "Governments derive their just powers from the consent of the governed." Courtesy of Women of Protest: Photographs from the Records of the National Woman's Party, Manuscript Division, Library of Congress, Washington, D.C. [mnwp.275034].

In the fight for suffrage, women were imprisoned for such "offenses" as holding open-air meetings and silently picketing the White House, although the official charge was obstructing traffic. Beginning in June 1917 and continuing for the next five months, 168 women were imprisoned, and countless more were arrested and released. While in prison, women both young and old were subjected to violence and intimidation, unsanitary living conditions, and were often placed in solitary confinement. When some of the suffragists instituted a hunger strike to protest their inhumane treatment and to demand political prisoner status, they were painfully force-fed. By the end of November 1917, responding to increasing public pressure, the government ordered that the suffrage prisoners be released from prison. However, suffragists continued to be arrested, and many imprisoned, over 200 times during the next 15 months. 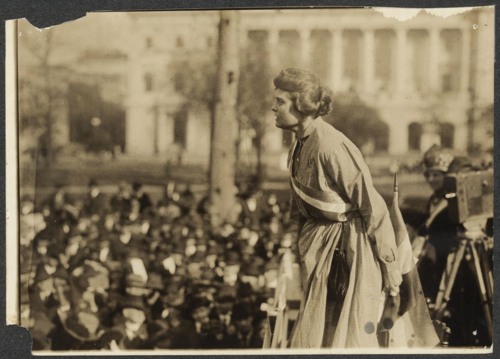 Suffragist Lucy Branham in Occoquan prison dress on the Prison Special Tour, 1919. Courtesy of Women of Protest: Photographs from the Records of the National Woman's Party, Manuscript Division, Library of Congress [mnwp.276031].

In February 1919, suffragists decided to tell the country about their experiences in prison and demand immediate passage of a national suffrage amendment. Boarding a train in D.C. called "Democracy Limited," 26 National Woman's Party members embarked on the Prison Special Tour, a three-week cross-country train tour. Often wearing their prison uniforms, the women addressed crowds of people across the country and met with fellow suffragists who had been jailed in other cities. They also held demonstrations against President Wilson for his inaction on woman suffrage, which generated a great deal of controversy. They were assaulted by angry crowd members on more than one occasion and were even arrested. However, the controversy helped generate national attention and their stories proved a powerful argument for woman suffrage. 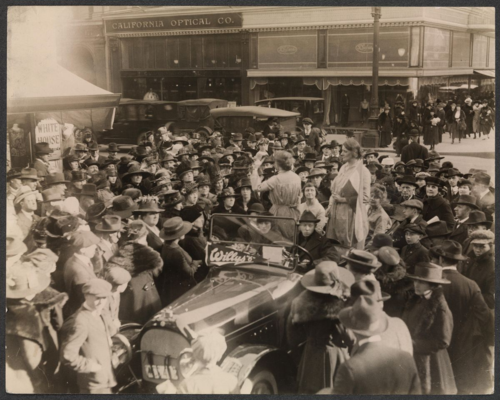 Suffragists in the Prison Special Tour address a crowd in San Francisco, 1919. Courtesy of Women of Protest: Photographs from the Records of the National Woman’s Party, Manuscript Division, Library of Congress [mnwp.160057].

Just a few months after the Prison Special tour, the Susan B. Anthony Amendment for federal woman suffrage was passed in the House on May 21, 1919. Two weeks later, after strong opposition, the amendment passed in the Senate by a narrow margin of just two votes. On August 18, 1920, over a year after Congress passed the amendment, Tennessee became the 36th state to ratify the amendment by a vote of 50 to 49. The deciding vote was cast by a young Senator Harry Burn, who changed his vote to yes at the last minute, reportedly at the urging of his mother. With the required three-fourths of the states supporting it (Alaska and Hawaii were not states at this time), the amendment was officially adopted. 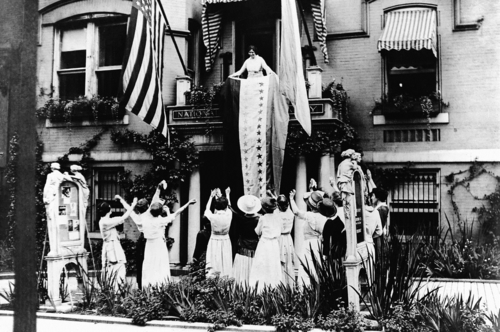 On August 26, 1920, the 19th Amendment became law, granting all American women the right to vote. Secretary of State Bainbridge Colby signed the ratification certification at his home on K Street in Washington, D.C. No suffragists were invited to witness this historic event and no photos or videos were taken.

Although suffragists who had fought so long for a federal amendment were left out of the final act of the amendment's passage, it in no way diminished their victory. The enormity of the changes they had brought to women's lives and to national politics were apparent just a few months later on November 2, 1920, when, for the first time in U.S. history, over 8 million women had a constitutional right to vote in the Presidential election.

Patri O’Gan is the James Lollar Hagan Intern with the Office of Programs and Strategic Initiatives. Don't miss part one, two, and three in her Traveling for Suffrage series. 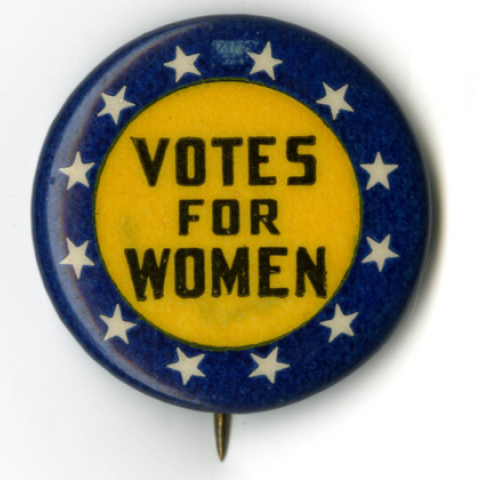 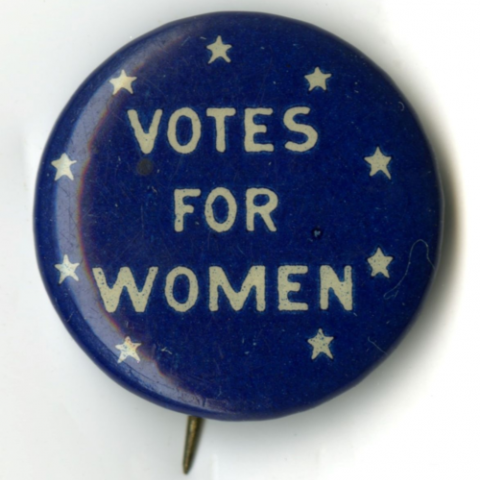