Mr. Peanut and Antonio Gentile: A trademark that defined a life

Packaging designer Walter Landor once said, "Products are made in the factory, but brands are created in the mind." One of the most iconic and long-lasting brands was born in the imagination of a teenage boy, Antonio Gentile. Curator Kathleen Franz introduces the story.

In 1916, Planters Nut and Chocolate Company ran a contest for a trademark. Antonio Gentile, a resident of Suffolk, Virginia, the peanut-growing capital of the state, began sketching possible entries for the contest. He drew a friendly, humanized peanut tumbling, serving nuts, and walking with a dignified cane. 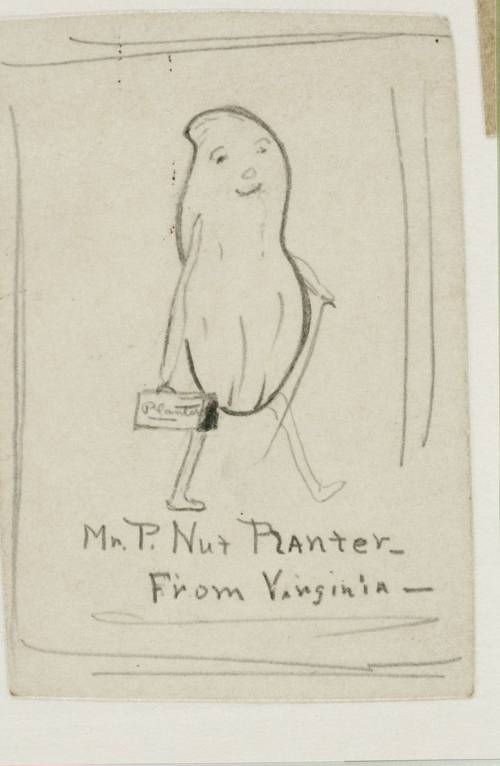 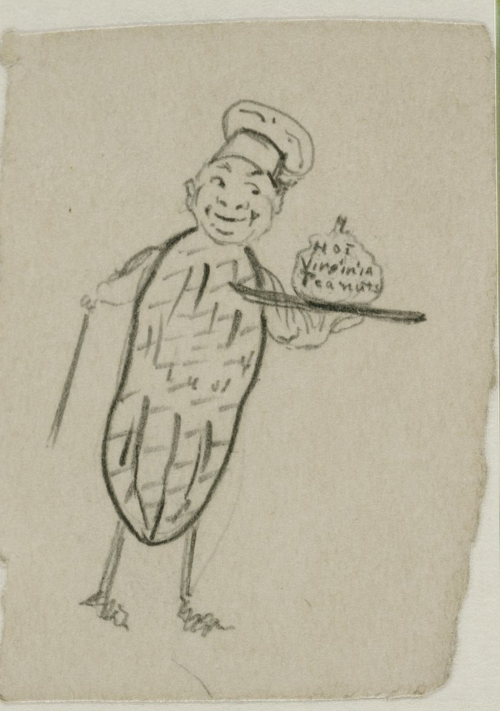 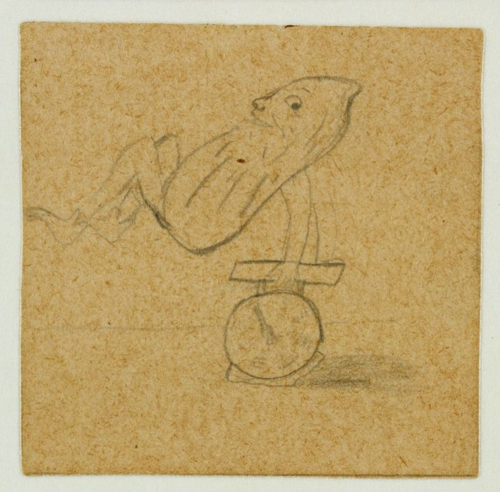 One of his sketches won the contest; Gentile earned $5, and became forever known as the young boy who created Mr. Peanut. Mr. Peanut himself got a little polish from a graphic artist and went on to a long career as the classy, and until recently, silent spokes-character for their product. 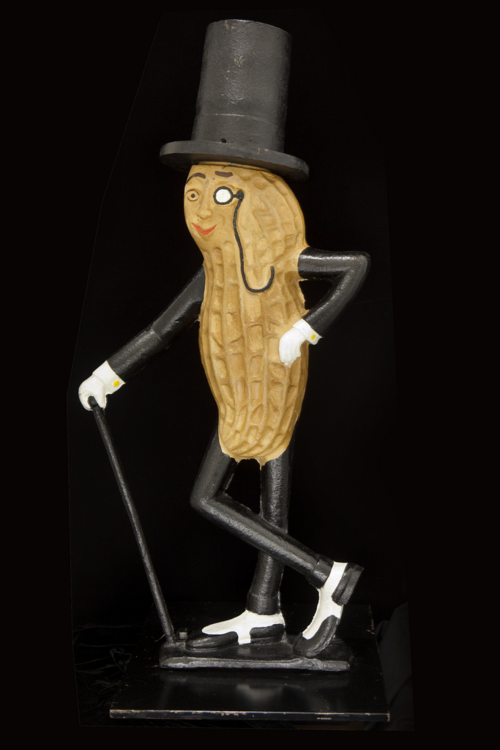 Recently, and serendipitously, Robert Slade, the nephew of Antonio Gentile, contacted the National Museum of American History to ask if the Smithsonian would be interested in the original drawings for the national collections. We had just—the same day—collected a large, cast-iron Mr. Peanut (pictured above), and here were the drawings that inspired that dapper figure. What luck! As the curators learned more about the history of the trademark from Mr. Slade, a more interesting story unfolded about the life of that imaginative young boy and his relationship to the Planters founder. We're delighted that Mr. Slade can share that story here. 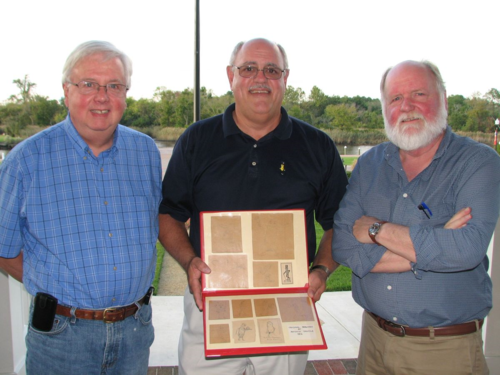 Antonio Gentile, our uncle, was born in 1903 in Philadelphia to Italian immigrant parents. He and his family later moved to Suffolk, Virginia, so our grandfather could utilize his tailoring skills.

Tony, as he was known, assimilated into the small town southern culture and the local Italian community easily. Both influences shaped him. The small American town allowed him to flourish and grow independent while the Italian connection allowed access to others of similar heritage, such as Amedeo Obici, one of the founders of Planters Nut and Chocolate Company. Our two families were close despite a wide financial disparity between them, with Amedeo and Louise Obici taking a personal interest in all of the children and even hosting our family on their family farm on numerous occasions.

Tony became an Eagle Scout and graduated as valedictorian of his high school class in 1920. He went on to the University of Virginia, earning honors and three degrees: undergraduate, medical, and a masters in science. 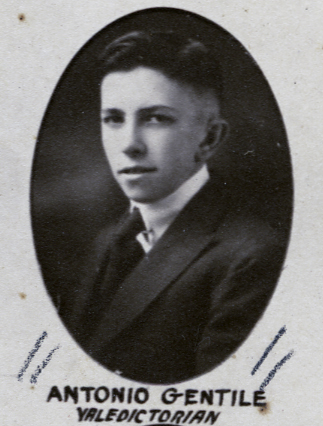 After four years of specialized obstetrical surgical study, his medical career took him to Elizabeth Buxton Hospital in Newport News, Virginia, where he was one of the youngest surgeons admitted as a Fellow in the American College of Surgeons. He became a fixture in the social and fraternal world of the "Peninsula," as that part of Virginia is known.

In December 1938, he married Delcy Ann Maney, but their marriage lasted less than a year; for Tony passed away of a heart attack in the early hours of November 16, 1939, while on duty at the hospital. His passing was noted prominently on the front page of several local newspapers, and in an editorial tribute on November 23, 1939, the Times-Herald of Newport News noted:

"For Dr. Antonio Gentile, skilled physician and surgeon, loved by a paying clientele who admired his ability and his personality, was perhaps held dearer to those who were not a paying clientele, whose money was gratitude only but whom he served as freely, as fully and as willingly as though they had been able to return wealth for service." 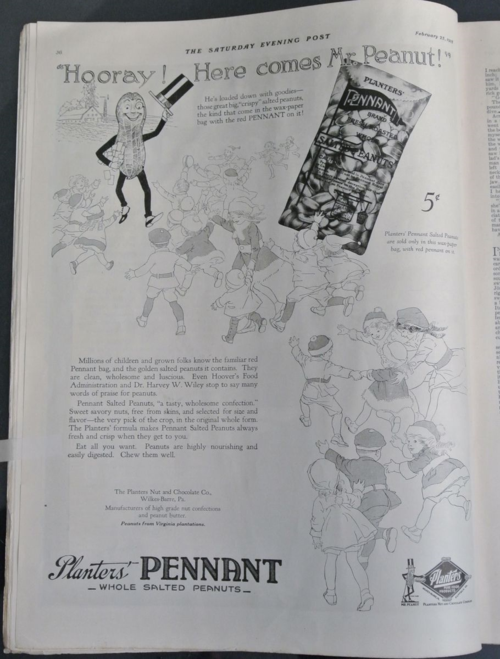 Yet to many, our uncle will forever be known solely as the schoolboy who, in a school contest in 1916, received $5 for drawing the figure that became Mr. Peanut, the trademark for Planters Nut and Chocolate Company. However, it was those crude pencil drawings, later enhanced by a commercial artist, together with the familial relationship with the company's founder, Amedeo Obici, which enabled him to fulfill his life's ambition of service to others. Had it not been for Mr. Obici's personal interest and generosity, Tony's education may not have been as extensive and his achievements as meaningful. It truly was the simple peanut figure that became an advertising icon which defined his life and his impact as a person.

To learn more about Mr. Peanut as a spokes-character, check out this episode of our Founding Fragments video series.