Mustang memories and a fair to remember

In the early 1960s, activists, professionals, and idealists changed America, making headlines and history. In 1964, the year of the New York World's Fair, Civil Rights Act, the Beatles, and the first mission to Mars, a memorable consumer product galloped onto the scene and changed the way Americans thought about driving. Curator Roger White reflects on the cultural meaning of the Mustang. 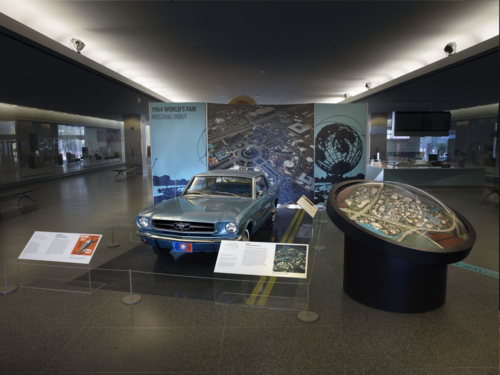 A 1965 Ford Mustang on display in the National Museum of American History in celebration of the museum's 50th anniversary in 2014. A diorama of the 1964 New York World's Fair, photo blowup of the fairgrounds, image of the Unisphere, commemorative fair license plate, and striped pavement complete the display. Photo by Hugh Talman.

In 1964, visionary ideas about the future of transportation were changing the built environment and the way we traveled. Americans were going places; mile after mile of new interstate highways promised unlimited high-speed motoring, and jet service was shrinking the nation. Beltways circled cities, and rooftop revolving restaurants offered futuristic vistas of auto-centered urban utopias. The world of tomorrow was here at last. 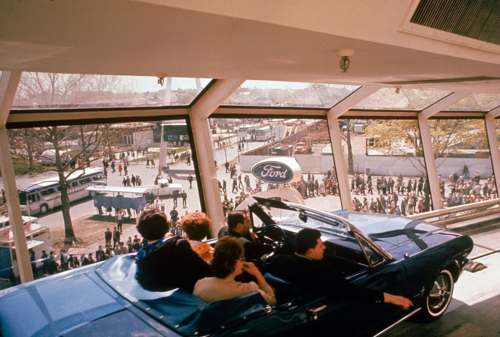 Mustang convertible on the Magic Skyway at the Ford pavilion, 1964 New York World's Fair. The family in the car enjoyed a glassed-in view of the fairgrounds and a ride through the pavilion with its prehistoric dioramas, city of tomorrow, and Ford showroom. Photo credit: Getty Images.

From George Washington to George Jetson, spectacular exhibitions showcased past achievements and future aspirations. The Smithsonian's new Museum of History and Technology dazzled visitors with awe-inspiring artifacts. The New York World's Fair, the emblem of America's soaring optimism, enticed visitors with corporate showplaces, futuristic architecture, and the promise of a brighter tomorrow through technology. 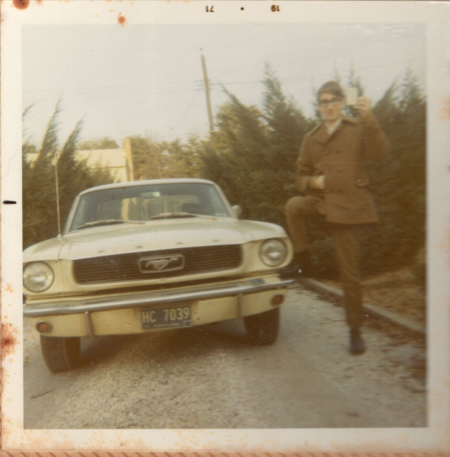 The blogger and his first car, a 1966 Ford Mustang, in his parents' driveway, 1971. This rite of passage called for a triumphant pose with driver's license held high, foot on the bumper, and hand in the jacket.

I was a kid in Maryland in 1964, and all of this newness was mesmerizing. Our family studied a well-worn World's Fair guidebook for more than a year and imagined ourselves in that greatest of imaginary worlds. When we finally rolled through the fair gates in our new 1965 Chrysler, we felt prepared to witness the future. Chrysler Corporation displayed a jet-like turbine engine car that was identical to ones being road-tested by consumers; maybe it would be our next car. General Electric demonstrated nuclear fusion, and General Motors gave us an armchair tour of tomorrow in the fabulous Futurama.

The Mustang's debut in the Ford pavilion was striking, and it differed from other car advertising themes. Since the 1950s, some auto makers had pretended that new cars were rockets or airplanes.  Ford glorified a long-ago era when driving was fun, and cars and drivers could roam the land as free as wild ponies. The compact Mustang sports car, with its jaunty styling and bucket seats, offered flair and the excitement of the open road, even in traffic. Its thrifty price made it a best seller; in two years Ford attracted more than a million buyers.

Somehow our family missed the parade of Mustang convertibles slowly circulating on the Magic Skyway ride. But three years later, my father drove home a white 1966 Mustang hardtop with black bucket seats. I learned to drive in that car, and it became my first set of wheels. Years later, I owned a red 1986 Mustang, and the unique driving excitement was still there.

Fast-forward to 2004 and the Mustang's 40th anniversary. Eleanor McMillan, a retired Smithsonian conservator, generously donated her light blue 1965 Mustang to the National Museum of American History. For this lucky curator, the collecting experience was déjà vu all over again; it was also my third or fourth childhood. Imagine the thrill of yet another close encounter with a Mustang, this time on behalf of the nation's museum. 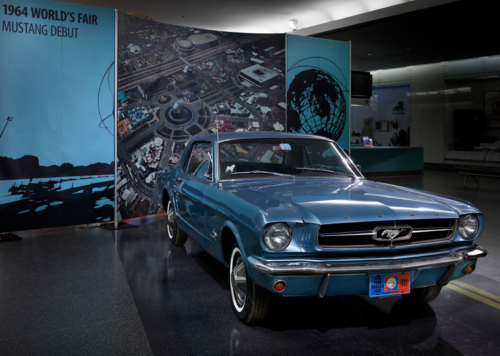 Another photo of the 1965 Mustang on display

The giddy promise of the World's Fair was overshadowed by the greening of America and sobering concerns about the world that the automobile created. Fighting air pollution, highway fatalities, traffic congestion, and urban decay topped the national agenda by the 1970s. A first-generation Mustang, for all of its folksy charm, would not meet today's emissions and safety standards. The Mustang's genes live on in models that are cleaner and safer, and no less fun to drive. The world of the day after tomorrow holds the past and future in a delicate balance.

Roger White is Associate Curator of Road Transportation in the Division of Work and Industry. He has also blogged about auto safety and the Conestoga Wagon. 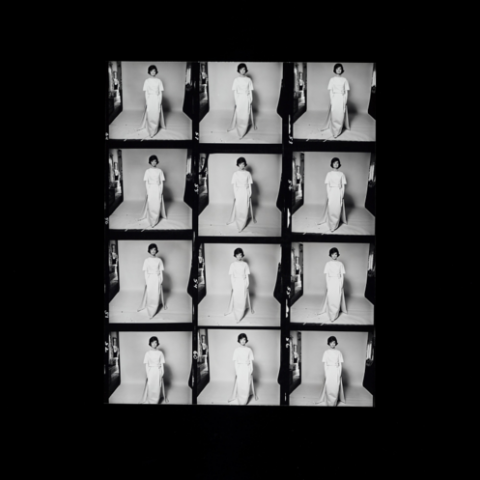