Can you imagine wearing one of these? 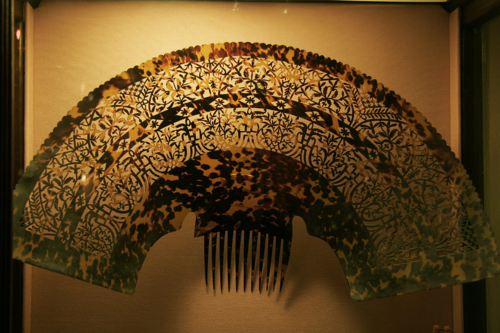 My goodness! It would be so uncomfortable; completely unthinkable to wear something this big and luxurious on the streets of any modern American metropolis.

Nevertheless, the sophisticated peinetones (high combs) were of high fashion and common use by wealthy women in cities such as Buenos Aires, Lima, or Rio de Janeiro in the 1820s-1840s. The fashion of using peinetones comes from Spain. Small versions of peinetas were worn by Catholic women to cover their head with a mantilla to attend mass at a church.

The small peinetas are the ones more commonly seen by Americans, particularly in the Southwest United States or other regions of dominant Hispanic influence such as Puerto Rico, Mexico, Philippines, and Cuba. 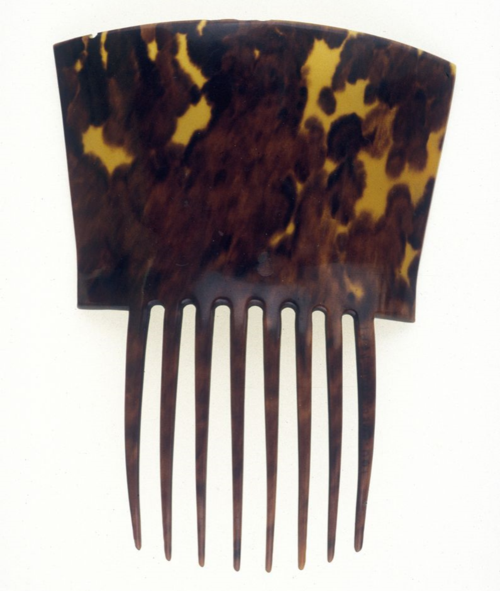 This tortoiseshell woman's hair comb dates from the 19th century. It is part of the museum's Teodoro Vidal collection.

Peinetones, though, are something else. They are made of the shells of turtles captured in the Caribbean Sea, also known by Spaniards as the Antilles Sea. Spanish or Portuguese galleons that traveled and traded between Europe and the Americas commercialized them. The plates of turtle shell found a market in the Rio de la Plata region (an area on the southeastern coastline of South America) and also along the Pacific Coast, Chile, and Peru where artisans purchased the turtle shells, which were then made into beautiful hair adornments by local artists and families.

Museum curator Nancy Davis tells me that combs were in high fashion here in the United States and Godey's Lady's Book shows them in use. The museum's division of Home and Community Life has some Chinese-made combs for the American market which aren't as large—but it is interesting that the Chinese also made combs (out of tortoiseshell) for the American market in the 1830s and 1840s. 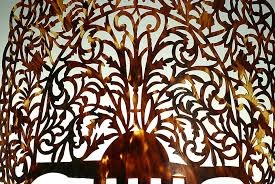 According to Argentinean scholar Nidia Cobiela, by 1823 there were four major peinetones businesses/fabricators in Buenos Aires. These original artisans made stylish innovations by adding different materials, such as silver inlay, or bone and enamels, to create whimsical designs. The most popular yet sophisticated was the filigrane. "Filigree" in English, this is a delicate jewelry technique that suggests intricate lacework.

The sheer size of the peinetones caused some social distress, even inspiring a few artists to create humorous lithographs. The drawings and series of lithographs ridicule ladies with their peinetones, such as depicting a woman with a massive comb unable to go through a door, or a man trying to kiss a woman and being poked in the eye by her high comb. 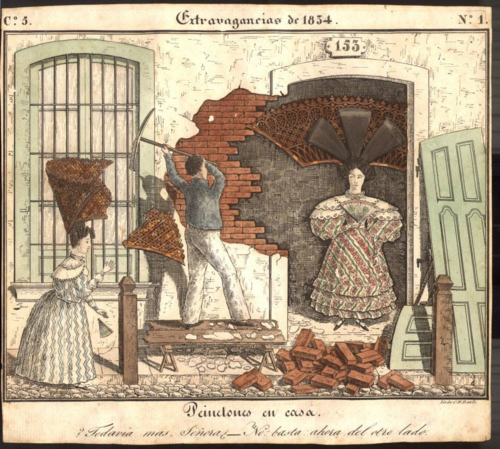 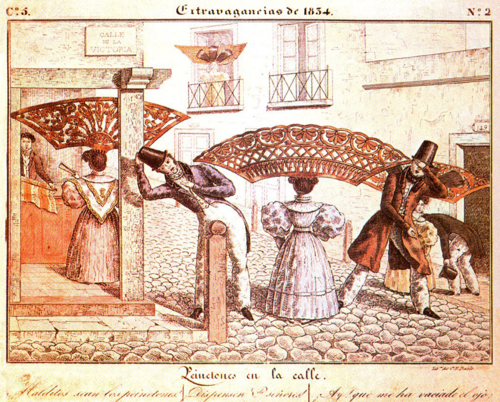 Images like this 1834 one by Cesar Hipolito Bacle also served as a social denunciation of such a fashion. Peinetones were almost completely out of view a few years after.

Before moving to the United Sates, I worked as assistant curator in the Museum of Hispanic American Art in the city of Buenos Aires. The museum has one of the most complete collections of peinetones in the country. This past year, the museum reopened its Peinetones Gallery honoring the donation of a great collection, the Celina Gonzalez Ganraṅo collection. It brought me back to thinking about women and fashion. A very fun topic! 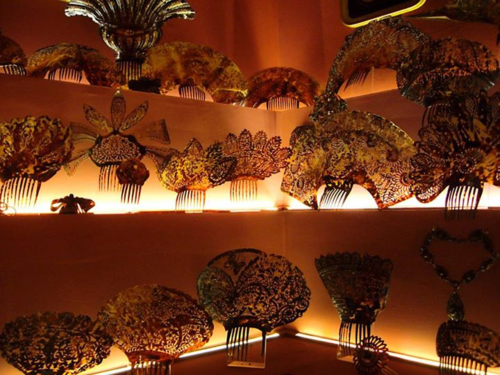 You can still see in a small form, a sort of "cultural reminiscence" of that fashion in Quinceanera (15th birthday party) mementos, plastic "Spanish" toys, and dolls such as American Girl's Josephina. More commonly, we see the original version, the peineta (a small peineton), as part of Flamenco style and performances. 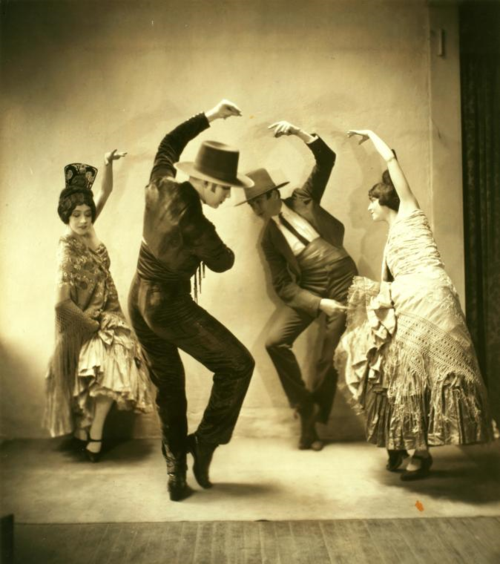 Magdalena Mieri is the Director of the Program in Latino History and Culture and Special Initiatives. She has also blogged about the Day of the Dead and why we commemorate the Mexican Revolution.