On Flag Day 2014, the museum kicked off bicentennial commemorations of a great American symbol—Francis Scott Key's song, "The Star-Spangled Banner"—with a concert at the museum, parties around the country, and lots of online activities to connect the nationwide celebrations. As the home of the flag that inspired the anthem, we have plenty to celebrate. New Media Intern Auni Gelles took the reins of the museum's social media accounts during the festivities and shares her behind-the-scenes view of Raise It Up! Anthem for America.

I was sitting at my desk, monitoring the museum's Twitter activity to see what participants across the country were saying about #raiseitup, when I glanced at the clock and realized that I had about two minutes to make it down four flights of stairs or I'd miss the cannons firing. 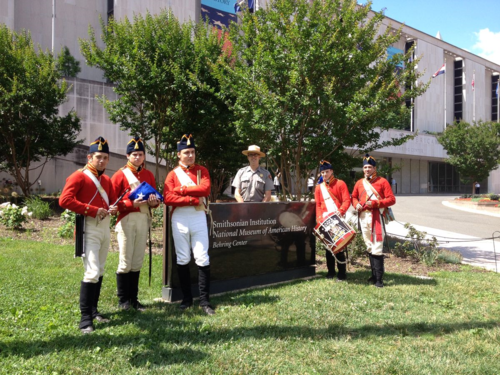 The War of 1812 comes to life outside the museum, thanks to the Fort McHenry Guard

Sporting my staff badge and Raise It Up! t-shirt, I navigated through a sea of visitors—many of whom donned red, white, and blue specifically for Flag Day—and out the museum's front doors. Sandwiched between the massive midcentury museum building and six lanes of traffic zipping past on Constitution Avenue, a crowd had gathered around the Fort McHenry Guard and their light blue cannon, positioned parallel to the building. The crowd was instructed to brace for loud noise. I scrambled to find a position and ended up climbing on a bench in front of a food truck, not just to see better but to capture a quick video for the museum's Instagram audience.

Just as I turned my phone to video mode, the living history troupe's leader—looking the part in a bicorne hat—gave instructions to "fire!" The cannon made a thunderous boom that echoed between the museum and Envrionmental Protection Agency building across the street, causing me to flinch and jerk my phone. Hopefully our Instagram followers wouldn't mind.

Six men in red military jackets, white trousers and tall black shako hats soon began playing a tune on their fifes and drums as kids in the crowd took their hands off their ears. Although I had observed the Guard's cannon firing demonstration before as part of my master's thesis research on War of 1812 commemorations, seeing it in such a thoroughly contemporary setting, so close to the National Mall, was a truly unique experience. 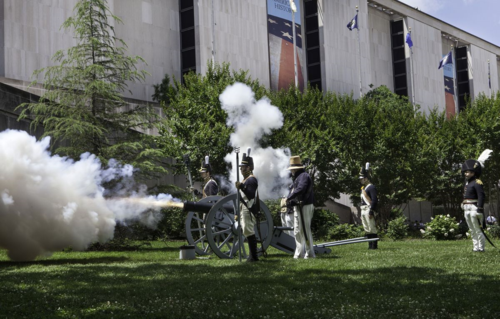 Cannon firing demonstrations outside the museum delighted visitors of all ages

As the cannon smoke cleared, I worked to post photos and videos of the excitement to the museum's social media channels, striking a balance between "fun and colorful" and "educational." The posts needed to explain for the casual reader that the cannon demonstration was part of the museum's celebration of the 200th anniversary of Francis Scott Key's song, "The Star-Spangled Banner"—which seems easy until you try to do it in 140 characters. Though most people are familiar with our national anthem, many don't know about its connection to the War of 1812. The goal of Raise It Up! was to help people around the country learn more about this important chapter in our nation's history through living history demonstrations, a musical performance, and a special exhibition.

The centerpiece of our Flag Day festivities was a concert of American musical masterpieces on the National Mall, where celebratory songs were tempered with solemn reminders of the war that produced the anthem. In between musical numbers, two speakers reminded the crowd about the dark events of the War of 1812 that took place two centuries ago.

In the summer of 1814, our young nation was embattled in a war both on land and at sea. Facing off against the powerful British military to secure greater freedom from our former mother country, the War of 1812 has been called America's "Second War of Independence." British troops attacked Washington, D.C., setting fire to the White House, the Capitol building, and other irreplaceable treasures in late August 1814. By mid-September of that year, the British moved northward to Baltimore. As Maryland Governor Martin O'Malley said on stage, "that shock-and-awe force that had leveled Washington turned on our city." The bombardment of Fort McHenry, at the mouth of the Patapsco River, lasted over 20 hours.

Burt Kummerow, President of the Maryland Historical Society, summarized what happened next: "No one in Baltimore knew what to expect when dawn broke on September 14, 1814. The night had been stormy, violent. […] Every American within range—soldier, or private citizen—was watching anxiously from roof and hilltop alike. The future of Baltimore, and perhaps the young United States republic itself, were hanging in the balance."

Their fears were calmed when an enormous flag was raised over the fort to signal an American victory. Today, this flag—the Star-Spangled Banner—is one of the museum's most popular artifacts. After witnessing this gut-wrenching assault from a ship in the harbor, an attorney by the name of Francis Scott Key was moved to compose the famous lines that became our national anthem. This very document, in Key's own handwriting, had just been installed for temporary display beside the flag that inspired it. I had the opportunity to see the manuscript the day it went on display and found that next to the massive flag, the document looks downright tiny. It is amazing to consider how one small, yellowed piece of paper has shaped America's self-identity for nearly 200 years.

As O'Malley and Kummerow spoke, I observed the crowd listening attentively to this brief history lesson on a sunny Saturday afternoon. The museum's social media followers were also engaged in War of 1812 history, though perhaps in more bite-sized pieces. I had culled through the museum's website and blog series to compose over 30 tweets about the history of the Star-Spangled Banner flag and song. Since the mission of the Smithsonian Institution is "the increase and diffusion of knowledge," I felt that these facts being re-tweeted shared from friend to friend was my very small contribution to this goal. The most popular Flag Day facts are below.

When working with the 200-year-old Star-Spangled Banner flag, we dress like this to protect it. #raiseitup #FlagDay pic.twitter.com/hkN9Avsq0U

Vexillologists (people who study flags) call the blue part of the flag the union or canton. #raiseitup #FlagDay pic.twitter.com/pIoBsmZTAc

Others watched the concert webcast—over 4,000 viewers tuned in online—or shared photos from Flag Day events in their own communities. As fun as it was to be part of the festivities at the museum, I made time to glance at my phone and check on the nationwide audience celebrating Flag Day from afar.

Over 100 organizations across the country registered to host their own Flag Day celebrations and sing the anthem. Gatherings took place in museums, parks, town squares, and shopping malls from the Ximinez-Fatio House Museum in St. Augustine, Florida, to Fort Mackinac, Michigan. The anthem could be heard internationally as the Consulate General of the United States in Basrah, Iraq, and the U.S. Embassy in Ulaanbaatar, Mongolia, joined in. The James Monroe Museum in Fredericksburg, Virginia, organized a kazoo rendition. If you participated in Flag Day festivities, please add your photos to the Raise It Up! Flickr group. 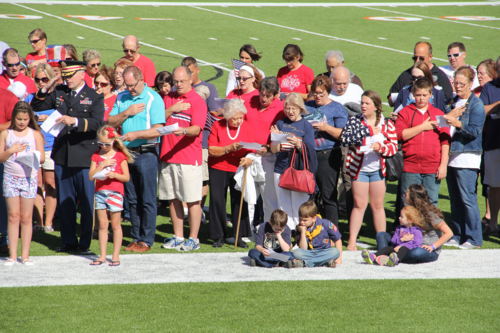 Residents of Pulaski County, Missouri participate in a Raise It Up! party sponsored by the Waynesville-St. Robert Chamber of Commerce

At 4:00 PM, audience members, performers, and passersby sang "The Star-Spangled Banner" here in Washington, D.C., knowing that, around the country, many other voices joined our own. I ignored our social stream, feeling like we were making history at that very moment with this coordinated singing of the anthem. I found myself forgetting some of the lyrics, despite hearing it at every sporting event and composing a barrage of tweets about it for the museum, and struggling to hit the high notes at the end. 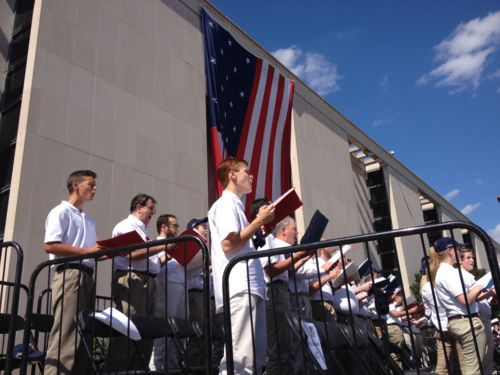 The choir was assembled by Chorus America, the Kennedy Center, and Classical Movements and made up of singers from 45 different states

As a resident of Baltimore—the birthplace of the anthem—and a student of American history, thinking about the Star-Spangled Banner is something I do almost everyday. The War of 1812 has held a special place in my heart since I worked (and had my wedding reception) at the Star-Spangled Banner Flag House in Baltimore, where Mary Pickersgill and her helpers sewed the flag. However, this incredible story has been lost to most Americans over the past two centuries. What I loved most about Raise It Up! was the opportunity to share this fascinating period with fellow history fans across the world and to collaborate with them to raise awareness about the Star-Spangled Banner through the power of social media.

Auni Gelles is an intern in the New Media Department. She is currently researching commemorations of the War of 1812 in Baltimore for her master's thesis at the University of Maryland, Baltimore County, even involving her dog in the process. Now that this part of the celebration is complete, she is turning her attention to Raise a Glass to History: 15 original cocktails inspired by the Star-Spangled Banner.

Intern perspectives on new media
Want to know more about the people behind this blog? Current intern Hannah Ostroff gives us a peek into her work and shares upcoming...