It's your birthday, Panama Canal!

On August 15, 1914, the Panama Canal officially opened for business with the passage of the American steamship SS Ancon, which had been acquired by the Panama Railroad Company to haul freight. The canal sliced nearly 8,000 miles off the Cape Horn route through much safer waters, and it was an immediate hit with the world's shippers at the dawn of the First World War.

The steamship SS "Ancon" was the first ship to traverse the Panama Canal on August 15, 1914. From the museum's Maritime Ralph E. Cropley Collection.

Before World War I, all oceangoing shipping transiting between the Atlantic and Pacific oceans had to take the arduous route around Cape Horn at the southern tip of South America. It was—and still is—one of the most dangerous ocean passages in the world, on account of extreme winds, waters, and weather. Unforgiving rocks invisible in the area's frequent fog made winter voyages challenging, and from the 16th century to the present day, hundreds of ships developed leaks and had to turn back, tore out their bottoms and sank, or simply disappeared.

The Panama Canal's Gatun Locks under construction. See the full panorama on Flickr.

Discussions about cutting canals across various points in South America had been ongoing for centuries, but nothing was ever accomplished. The region was unhealthy, portions were unexplored, and sometimes the local populations were hostile to outsiders. Then a railway was built across the Panama Isthmus in 1855 to accommodate the California Gold Rush, and a report produced for the American government advocated cutting a canal across Panama at the Isthmus.

Banking on their success with the Suez Canal, a French effort started cutting the Panama Canal in 1881. It proved nearly impossible to construct, and poor planning, mismanagement, and mosquito-borne diseases were some of the factors leading to bankruptcy of various French corporations. The United States took over in 1904 and completed the difficult engineering project ten years later.

A section of Panama railroad tie (back)

To honor the occasion, a quick review was in order of the museum's "PanCan"-related collections in the Division of Work and Industry. Most of the holdings consist of souvenirs, like postcards and photographs of the canal construction workers, their machinery and labor conditions.This reflects the evolution of the canal as a tourist destination even while it was under construction, as visitors wanted to see the human and mechanical work process on the world's largest marine engineering marvel.

Once workers had put in (or, in some cases, survived) two years of labor, they received a presidential medal engraved with their names.

One American put in even more effort into the canal. Edgar L. Fogleman of Burlington, North Carolina, went to work on the Canal in 1911. He worked there more than ten years and even invented a new rock drill, which he patented in both Britain and the United States.

Two of his brothers worked there as well, and Edgar purchased, licensed, and rode a Harley-Davidson in the Canal Zone starting in 1919. The bike's serial number reveals that it is a 1919 W or "Sport" model, the first Harley-Davidson bike with a designed logo on the tank, and the first Milwaukee model actively marketed to women as well as men.

Fogleman on his Harley-Davidson in the Canal Zone

The United States withdrew from Canal Zone oversight in 1999. Today, ship tolls pay for maintenance and upgrades of the canal, and these revenues form a significant portion of Panama's economy.

New and larger locks, together with wider and deeper channels, are under construction to increase the size and capacity of the ships transiting the Panama Canal. When completed, ships 1,200 feet long capable of carrying 13,000 containers will be able to use the canal, retaining its competitiveness with the Suez Canal and a recently approved Nicaragua Canal. Petroleum and its products continue to lead the cargo tonnage, followed in descending order by grains, coal and coke, and ores and metals.

The Panama Canal remains essential to the safe and economical movement of global cargoes, and we may be assured that it will be around for its 200th and later anniversaries.

Paul F. Johnston is a curator in the Division of Work and Industry. More images from Panama Canal collections are on Flickr. Want more Panama Canal history? Lauren Jaeger blogged about a Panama Canal ghost story. 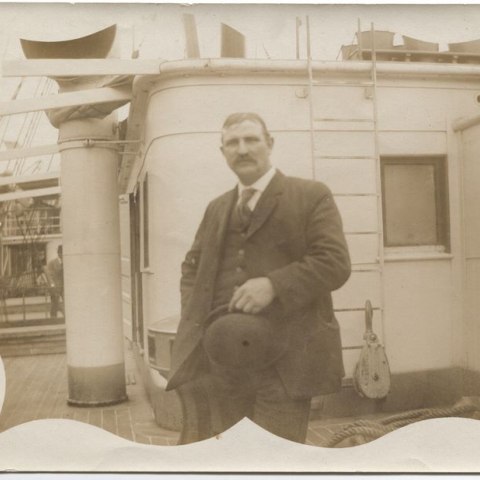