Making sense of our Harley-Davidson with Guatemalan connections

In museums, it's common for a single artifact to tell many diverse stories, far beyond the scope of any one exhibition. Christine Miranda, who interned with our Program in Latino History and Culture, explores this idea when she encounters a motorcycle used in Guatemala and digs further.

Our America on the Move exhibition on the history of U.S. transportation is designed to transport you around the United States. As visitors explore all 26,000 square feet of our Hall of Transportation, they "travel across America," entering a variety of carefully curated historical moments. One of the exhibition's later segments, "Suburban Strip," immerses museumgoers into the life of the "car-owning middle class" in Portland, Oregon, 1949. The display, complete with a replica road, features an array of vehicles typical of the time and place: a pickup truck, a Greyhound bus, a motor scooter, and even a genuine Harley-Davidson motorcycle. Despite the bike's 1949 Oregon license plate, it was never actually ridden in the Pacific Northwest.

Where was it really used? The roadways and landscapes of Guatemala. What's more, the customized motorcycle was owned for several years by the Central American country's president, Jorge Ubico.

I discovered the object's mysterious past while searching the item catalogues for traces of hidden Latino history at the museum. I guess you could say I hit the jackpot. Though a Guatemalan ruler's motorcycle may seem like an odd choice for the collections at the National Museum of American History, its inclusion in fact sheds light on the global impact of U.S. transportation industries and broadens our understanding of who, what, and where "America" includes. 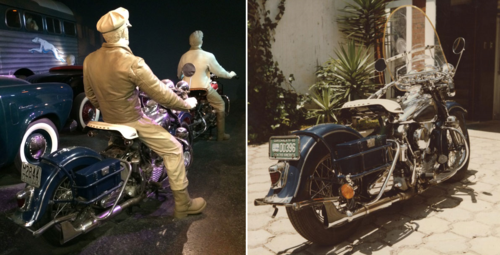 On the left, the museum's 1942 Harley-Davidson motorcycle as it appears in "America on the Move", designed to fit mid-century Portland, Oregon. On the right, the motorcycle parked in a driveway with a license plate that reads "Guatemala 1979-1983."

Jorge Ubico, a well-educated lawyer and politician from his nation's capital city, ascended to the Guatemalan presidency in 1931. He would then stay in that post for 13 years and become the self-proclaimed "little Napoleon of the tropics." Besides his flair for the ostentatious and suppression of political dissent, Ubico is best remembered for his aggressive pursuit of foreign investment and close economic alliance with the United States. Notably, Ubico strongly supported the U.S.-owned United Fruit Company (UFCO), the corporate giant nicknamed el pulpo ("the octopus") for its wide-reaching influence throughout 20th century Central America.

During his regime, UFCO became the largest landowner in Guatemala and enjoyed exemption from taxes and import duties. Via the International Railways of Central America (IRCA), UFCO also owned and operated the nation's rail network, which facilitated its own international trade. Interestingly, when visitors first enter our America on the Move exhibition, they encounter the giant steam locomotive Jupiter, ostensibly at home in Santa Cruz, California. Though the train did originate there in 1876, Jupiter actually spent the better part of its career transporting bananas along the IRCA in Guatemala! 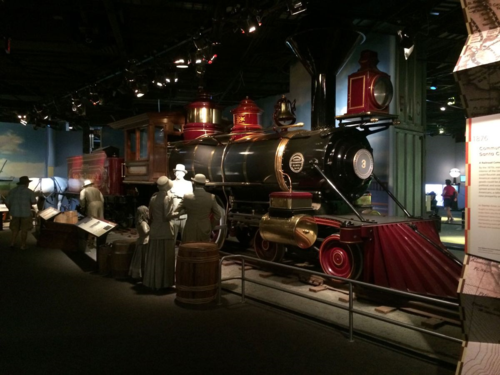 The locomotive Jupiter, a freight and passenger train used from 1876 through the 1960s, reveals that Ubico's motorcycle is not the only object in "America on the Move" with hidden Guatemalan history. In fact, Jupiter underscores the connection between domestic and foreign industrial development during the 20th century.

Like Jupiter, Ubico spent many years traversing Guatemala with the help of American transportation technology. His flashy motorcycle, a 1942 Harley-Davidson Model 74 OHV (Overhead Valve) Twin, was infamous. As described by American journalist Chapin Hall in his Los Angeles Times column:

"When President Ubico, of Guatemala, starts on a tour of inspection, which he does several times a year, he doesn't order out the guard and a special train, but hops on a motorcycle, shouts 'c'mon boys,' and leads a squadron of two-wheelers, each one manned by a government department head."

Despite the almost comical image conjured by Hall's description of Ubico aboard his blue and chrome motorcycle, his "inspections" were the mark of his harsh, militaristic rule. Ubico's Harley-Davidson enabled him to travel to rural communities, where he personally settled local disputes and "imposed his own brand of justice," according to the same Los Angeles Times column. 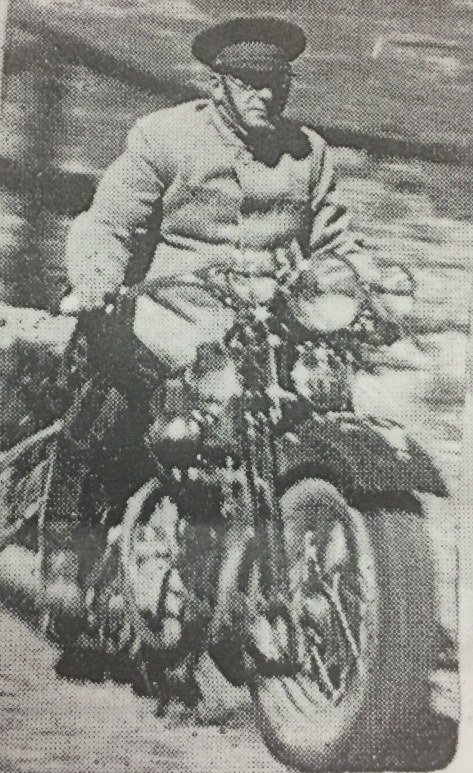 As president of Guatemala, Jorge Ubico repressed democratic practice and political dissent. His pro-U.S. economic policy worsened the plight of the middle and lower classes, while his labor laws (designed to facilitate the development of public works, like roads) utilized indigenous labor. The image of Ubico atop his motorcycle, shown here, reveals the reality of justice under his rule: "the president might appear suddenly, almost out of nowhere, on his fancy, powerful machine to render judgment". (Quote is from "I Ask for Justice: Maya Women, Dictators, and Crime in Guatemala, 1898-1944" by David Carey.) Image courtesy of Alvaro Aparicio.

To my surprise, Ubico was far from the first to use a Harley-Davidson motorcycle for military purposes. Already used domestically by American police departments as early as 1908, Harley-Davidsons were ridden by General John J. Pershing's men in their unsuccessful nine-month pursuit of Mexican revolutionary Pancho Villa. Harley-Davidson would go on to supply 20,000 military motorcycles during World War I and 80,000 during World War II. In fact, according to Paul F. Johnston, a curator here in the Division of Work and Industry, Harley-Davidson motorcycles were manufactured almost exclusively for the U.S. war effort in the 1940s, with Ubico's bike being a rare exception. 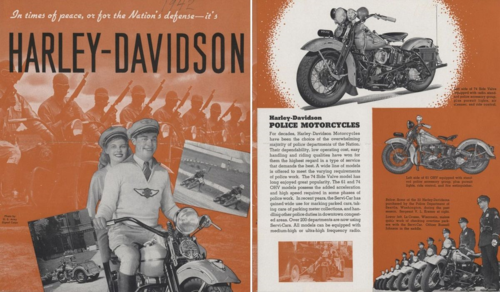 This 1942 Harley-Davidson brochure, saved in the curatorial file for Ubico's motorcycle, emphasizes the company's role in military and law enforcement

After the war, Harley-Davidson and other American corporations enjoyed a surge in the motorcycle's recreational popularity, with returning veterans bringing their experience and interest in riding back home with them. This is where Ubico's bike enters the story in America on the Move. Stylized with an Oregon license plate, the motorcycle helps recreate Sandy Boulevard, a burgeoning commercial area in the suburbs of Portland during the 1940s and 50s. By bringing to life this history of midcentury suburbanization, Ubico's motorcycle functions as a 1942 Harley-Davidson, not a symbolic set of wheels.

In tandem, the motorcycle's two histories can help expand upon the themes of America on the Move and create important, interdisciplinary connections. Transportation history is industrial history is political history, and Ubico's acquisition and use of an American motor vehicle has everything to do with the economic relationship between the United States and Central America during the age of UFCO's prominence. When the tide turned for Ubico in 1944 and nationwide disapproval forced him to resign, Ubico sought refuge in New Orleans, Louisiana, where he lived in exile for two years before his death. Maybe it is ironic that his iconic Harley-Davidson followed him and found a final resting place in the Smithsonian.

Since its donation in 1981, the bike has been on almost continuous display, first in the Road Transportation Hall and now, of course, in America on the Move. Chameleonic, it continues to serve various purposes. Millions of museum visitors enjoy it as a classic American artifact, oftentimes recalling their own stories and experiences with motorcycle history and culture. I look at Ubico's bike and see that. I also see the overlapping social, military, and industrial functions of U.S. transportation, at home and abroad; the story of the man behind the motorcycle; and the multiple layers of history encapsulated by the most unexpected of museum objects. Perhaps, now you can too.

Christine Miranda was an intern in the Program in Latino History and Culture. She recently blogged about eight ways to experience Latino history at the museum.

Join us on Wednesday, October 8 to see Harvest of Empire, a documentary that examines the political events, social conditions, and U.S. government actions that led millions of Latino families to leave their homelands in an unprecedented wave of migration from Mexico, the Caribbean and Central America.

Posted in From the Collections, Latino History & Culture, Transportation History 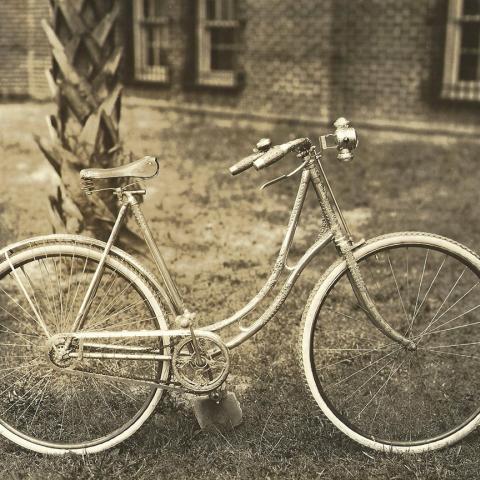