The National Museum of American History has a number of artifacts donated in 1983 by Elisabeth Pal, the widow of brilliant animation pioneer George Pal (born Julius Gyorgy Marczincsak). Pal is universally renowned for introducing the art of stop-action puppetry, an innovative method of film animation that creates the illusion of movement in inanimate objects (i.e. puppets with interchangeable limbs) by posing and reposing them in incremental amounts between individually photographed frames of film and then playing the film at normal speed. The technique grew out of his desire to find a three-dimensional alternative to the flatness of traditional cartoon animation. 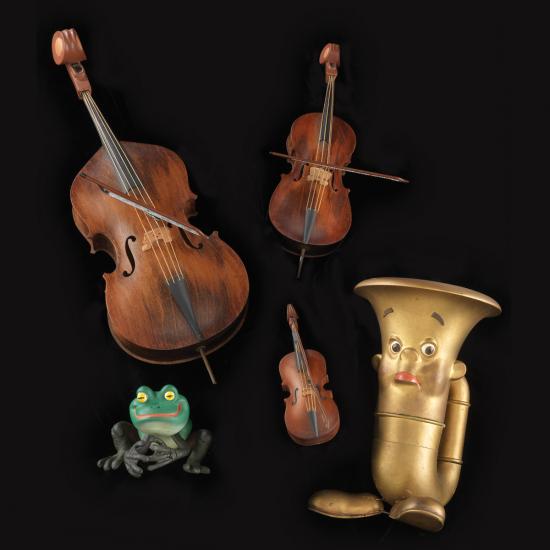 Born in 1908 in Cegléd, Austria-Hungary, Pal began his experiments with creating small wooden figures and filming them in the early 1930s, while he was a young man in his twenties working in Berlin with the famed UFA Studios. It was in this period that he obtained a patent for his technique, trying his ideas in a series of short advertisement films for Philips, a Dutch electronics and lighting company.

In 1939, Pal fled from the Nazism that was strangling Germany and immigrated to America. He settled in Hollywood, where he worked at Paramount Film Studios. He obtained his U.S. citizenship with the help of his friend Walter Lantz, the cartoonist famous for creating Woody Woodpecker.

Let's look at some of Pal's most interesting creations, all in the collection of the National Museum of American History. 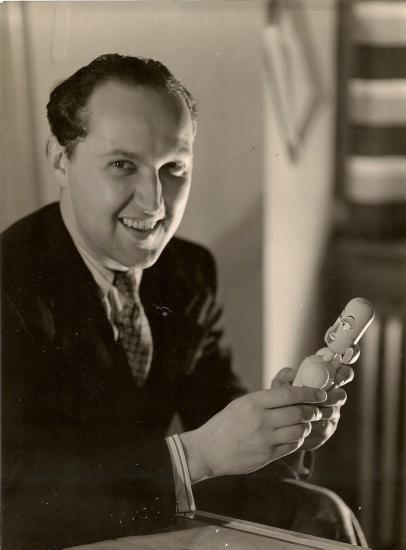 While at Paramount, Pal made a series of stop-action films called Puppetoons. These films were shown in movie theaters beside full-length features. Tulips Shall Grow, a 1942 Puppetoon release, is a wartime fable about the terrors of totalitarian aggression, much as Europe was then being besieged by the threat of Nazism. It focuses on a boy and girl in a picturesque Dutch setting being menaced by the Screwball Army, an obvious stand-in for Hitler's brigade. A member of the Screwball Army consisted of a headless figure made of oversized dark gray and silver-colored metal nuts and bolts. That it is faceless makes the puppet seem all the more ominous. 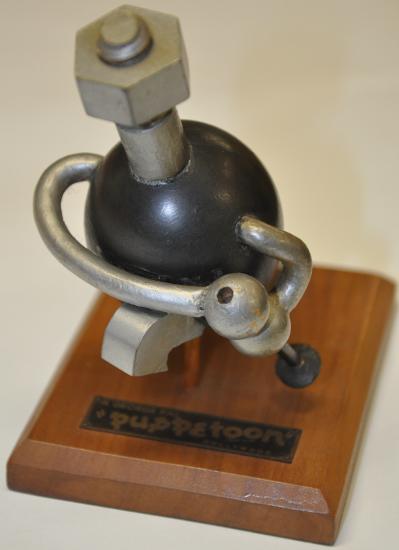 Perhaps the most remembered of the Puppetoon series are Pal's puppets created for 1947's Tubby the Tuba. Based on an idea by songwriters Paul Tripp and George Kleinsinger, the short film tells the story of an anthropomorphic symphony orchestra and one of its members, a cherubic, apple-cheeked young tuba named Tubby. Tubby is dismayed at always being given the accompanying role of supplying the bass line to the orchestra's melody. A kindly and wise frog teaches him a new tune and the following day, Tubby gets his solo at last by playing it with the orchestra.

The Tubby puppet is made of gold-painted plaster with bright moveable plastic eyes. Tubby is mounted on a wooden platform with the character of the frog, made of lime-green plastic. The collection also has several other of the orchestra's instruments, including a miniature violin, a cello, a double bass, and a set of kettle drums with cymbals and cow bells. 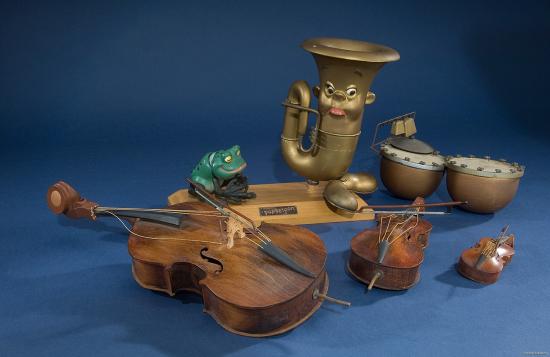 Also from 1947 is Date with Duke, a Technicolor film short that was a collaboration with composer extraordinaire Duke Ellington. Ellington at the piano performs his "Perfume Suite" with a quartet of animated perfume bottles accompanied by an unseen orchestra. The clear fluted glass perfume bottles are elaborately decorated with sequins and faux jewels. Atop each bottle is a round wooden head with felt "hair" wearing a bejeweled headpiece or golden crown resembling a bottle stopper. Each bottle has a flower-shaped glass "trumpet." 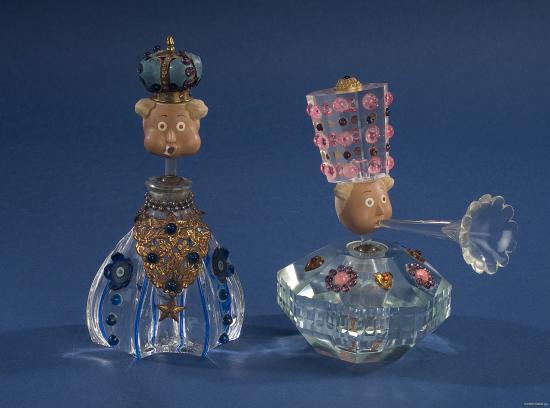 In the 1950s, Pal produced a commercial for Peter Paul Candy called "Sweet Pacific." Using a tropical setting and evoking an exotic island setting and title reminiscent of Rodgers and Hammerstein's colossally successful 1949 stage musical South Pacific, Pal designed it as a product advertisement in largely the same manner as he had done in the 1930s for Phillips. This time, the puppets were singing and dancing Mounds candy bars made of sepia-colored rubber, proclaiming that they represented "the finest candy bar of all." Each of the bars is equipped with a progression of cherry-shaped heads, each with a different expression. The rubber candy bars are mounted in a wooden shadow box, with a cardboard pink façade resembling a curtain valance. The interchangeable heads are arranged like footlights in front of the candy bars. 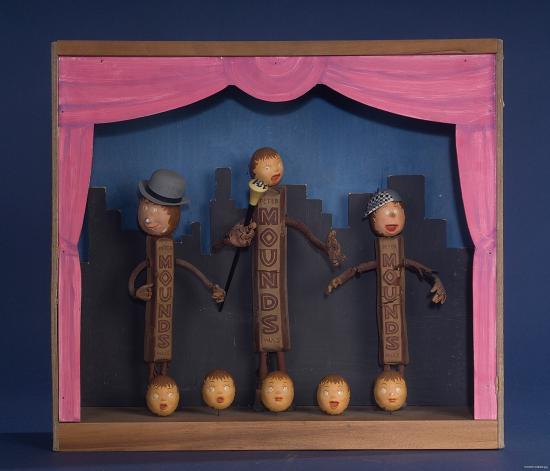 The film shorts and commercials were soon joined by feature-length films, like the MGM musical fantasies Tom Thumb (1958) and The Wonderful World of the Brothers Grimm (1962). Both films, which combined live-action with stop-action puppet sequences, featured a character called the Yawning Man. The puppet has a body and limbs made of latex with a wire core for pliability. The figure has 27 faces, carved of pink wax, each of which reproduces one gesture of a yawn. It is dressed in an elfin orange and brown suit and cap. 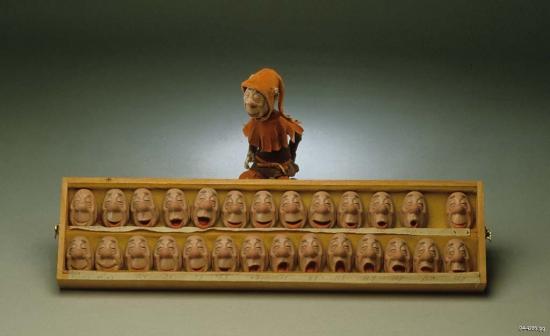 George Pal received many honors for his pioneering work in films. He won ten Academy Award nominations and five Oscars, including a 1944 honorary award for "the development of novel methods and techniques in the production of short subjects known as Puppetoons." In 1980 the Academy of Motion Picture Arts and Sciences founded the "George Pal Lecture on Fantasy in Film" series in his memory. 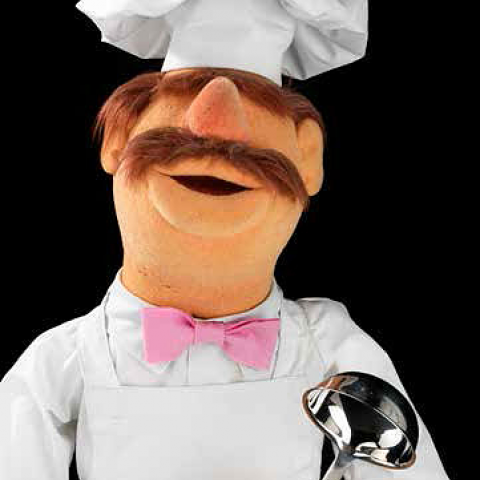