5 ways women influenced politics before they got to vote

As a young woman casting my vote in my first presidential election, I came to the museum interested in learning more about the history of politics and political engagement. What, for example, might my political involvement have looked like in other points in American history? Women have come a long way in the American political landscape. Although a gap remains, more and more women are running for office, holding important campaign roles, and casting their ballots. Parties recognize women as a significant voting bloc that needs to be appealed to.

For much of American history, however, women could not vote. The 19th Amendment, which extended the Constitutional right to vote to women, wasn't ratified until 1920, less than 100 years ago. Then how did these disenfranchised Americans influence political outcomes? What role did they play in key political decisions? Here are five ways I have found that women used their influence before the vote.

During the 1840s through to 1900, political rallies were also spaces where young men and women flirted and met their potential spouses. Politically inclined women charmed men to follow certain political leanings, especially men who were voting for the first time at age 21. In his new book The Virgin Vote, Smithsonian political history curator Jon Grinspan explains that women even "turned down marriage proposals specifically because of a young man's political affiliations." These actions pressured husbands and suitors to vote in favor of a woman's views.

Carry Nation (1846–1911) became a Temperance icon by smashing saloons, with her hatchet in one hand, and Bible in the other. Churches and theaters paid her to rail against alcohol, the "devil's water."

"Carry Nation used her place as a woman in Victorian society to spread her message. If a man smashed barrels of alcohol at the time, he would've been stabbed," Grinspan said during an interview. "Yet, when Carry did the same thing, they had to be gentlemen and would not hurt her." Although many of her contemporaries saw Carry Nation as a figure of ridicule, they also respected her integrity and passion for her beliefs. Most importantly, Nation used her radical approaches to launch the Temperance movement into the center of American life and politics.

Lucretia Mott, Elizabeth Cady Stanton, and other women organized the first women's rights conference in the United States called the Seneca Falls Convention in 1848. With an attendance of 300 individuals, they finalized and signed the Declaration of Sentiments, a publication modeled after the Declaration of Independence demanding access to education and voting for women in America. Although there was a lot of backlash at the time, this bold Declaration established that women were capable of participating in the political process. Mott and Stanton specifically alluded to one of the nation's founding documents to show the consistency of a woman's right to vote with the fundamental philosophy of this country. The Seneca Falls Convention was a first step towards the passage of the 19th Amendment.

In the early 1900s, women made politics immediate through everyday objects. For example, suffragists used wagons to disseminate information about women's rights across the country. Women, such as Lucy Stone, co-founder of the American Woman Suffrage Association, loaded these everyday wheeled vehicles with The Woman's Journal, a weekly pro-suffrage newspaper. Women also painted reasons why they should get the vote on the wagon itself. Above one of the wheels, it says, "90% of the teachers are women, this nation needs intelligent voters." Hence, women transformed this unique object into a publicity tool inside and out.

Although these examples highlight opportunities afforded to white women, many of them women of privilege, women of color found some ways to participate in the political arena despite the discrimination they faced. Ida B. Wells-Barnett is a notable example, a black woman who broke through all the barriers stacked up against her and made a remarkable impact on advancing civil rights in America. Born into an enslaved family, Wells-Barnett devoted her life to anti-lynching crusades through journalism, boycotts, and legal channels. Her investigative journalism was essential to making the horrors of lynching known nationwide. Wells-Barnett was also a leader in the struggle for woman suffrage. She founded the Alpha Suffrage Club in 1913 to advocate for women's rights and to push for the election of African American leaders to public office. During the March 3, 1913 suffrage parade in Washington, D.C., amid debates about whether African American participants would be forced to march in a segregated section, Wells-Barnett slipped into the parade and marched alongside the all-white Illinois delegation.

These lessons can inspire us today, especially in light of the decline of youth voting. We can look to our forebearers for examples in action. These women and others like them used all of the means they had before the vote—advocating, influencing, bearing witness—to make change. What could we accomplish if we used all of our means, including but not limited to voting, to make change today?

All the images above are of items that can be viewed in the Smithsonian collections. This post has been updated since its original publication.

Elizabeth Siyuan Lee completed a James E. Webb internship in the Department of Education and Outreach as well as the curatorial Division of Political History. She is a senior at Middlebury College, majoring in Philosophy.

Posted in From the Collections, Women's History, African American History 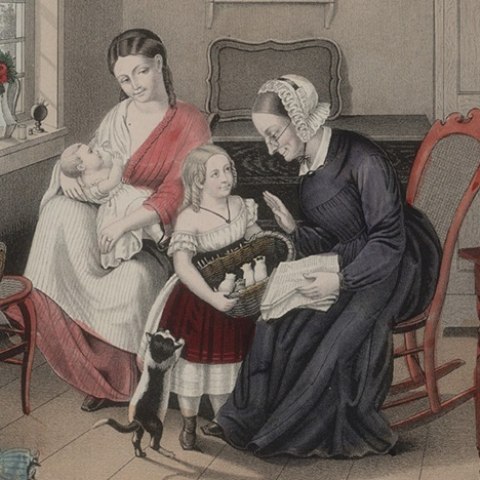