Ben Kuroki was born on May 16, 1917, in Gothenburg, Nebraska, to Japanese immigrant parents. With the onset of World War II, Kuroki and other Japanese Americans faced discrimination, and many were forced out of their homes and into imprisonment camps established by the U.S. government. Despite this, shortly after the attack on Pearl Harbor Kuroki and his brother Fred attempted to enlist in the U.S. Army. They were turned away from the first recruitment office due to their Japanese heritage, but eventually succeeded at a second office where the recruiter perhaps mistook their heritage or was willing to overlook it. 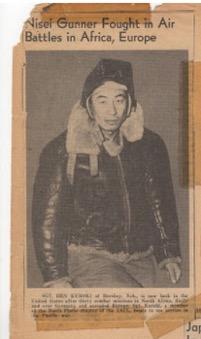 Although he was told that as a Japanese American he would not be allowed to serve overseas, Kuroki petitioned for months and was eventually sent to England with the 93rd Bombardment to serve as a turret gunner with the Eighth Air Force. Between 1942 and 1944 he participated in 30 combat missions over Europe, exceeding the normal requirement of 25 missions per airman, and was awarded two Distinguished Flying Crosses.

After completing his 30th mission in 1944, Kuroki returned to the U.S. on furlough and spoke at Japanese American imprisonment camps to help boost morale. He then turned his sights to the Pacific Theater. If Japanese Americans serving overseas in Europe was rare, serving in a combat role in the Pacific, which involved flying in missions over Japan, was unthinkable. However, Kuroki petitioned repeatedly and eventually, with the help of Secretary of War Henry Stimson, was assigned to the crew of a B-29 with the 20th US Army Air Force. He flew in 28 combat missions in the Pacific Theater and was awarded another Distinguished Flying Cross and an Air Medal with five Oak Leaf Clusters.

Ben Kuroki was the only American of Japanese descent in the United States Army Air Forces to serve in combat operations in the Pacific theater of World War II. Upon arrival, he was assigned a blood chit as part of his kit. This object intrigued me and I decided to explore its history. 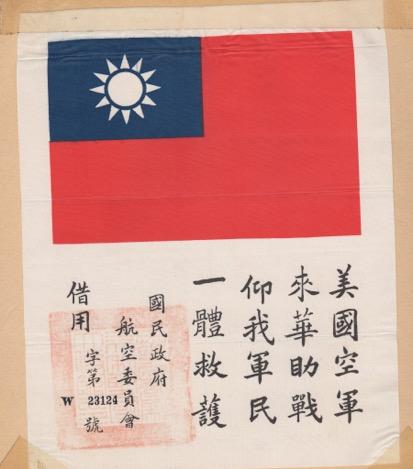 Every airman assigned to the Pacific Theater received a blood chit like Kuroki's. A blood chit is an identification flag that carries instructions for locals on how to assist downed pilots. Each blood chit had the flag of local allies printed on the top, with a message below in the local language. Each one promised locals that the pilot was an enemy of the Japanese and that whoever rescued him would be compensated for escorting the downed pilot to safety.

Blood chits existed long before World War II, though they weren't always known by that name. In 1793 President George Washington wrote a pass to prevent mistreatment of a French balloonist ascending from Philadelphia. Americans who came upon the balloonist were to treat him with "humanity and good will, which may render honor to their country…" Blood chits came into more common use during World War I by the British Royal Flying Corps (later the Royal Air Force). The name itself stems from the British slang term "chit" or note. Some sources suggest that the use of "blood" refers to the physical harm downed pilots could experience at the hands of hostile local civilians. By World War II, the U.S. Army Air Force had adopted the practice.

Kuroki's silk blood chit is marked in Chinese, and has the flag of the Koumintang (Chinese Nationalist Party) printed at the top. In the center, a red stamp representing approval by the Chinese Bureau of Aeronautics certifies the chit. He carried it throughout his 28 missions in the Pacific Theater.

Pilots continue to carry chits today. For most pilots, the chit represented a hope for safety in the event of being shot down. I find Kuroki's chit interesting because of this hopefulness. Not only does it represent the hope of fair treatment in the wake of disaster, the chit illustrates the U.S. military's trust in a Japanese American pilot during a war against Japan. As the only Japanese American to fight in the Pacific Theater, Kuroki's service became a milestone in the fight for equality and fair treatment of all Americans, no matter their heritage.

After the war, Kuroki continued to fight against discrimination, and was awarded the Distinguished Service Medal in 2005 and Presidential Citation in 2008. He died at age 98 on September 1, 2015. 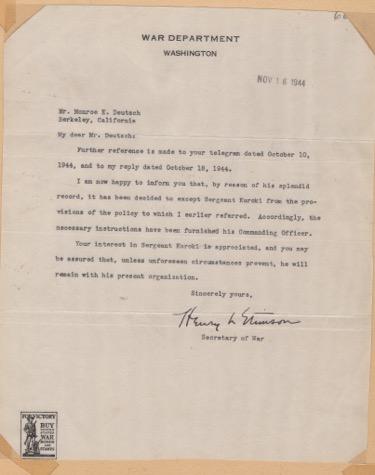 Jonathan van Harmelen is a junior studying History at Pomona College. He currently works as an intern at the National Museum of American History with Katherine Ott, Noriko Sanefuji, and Bart Hacker, with a focus on military history.

You may also also enjoy this post on the journey of another blood chit on the National Archives blog.