"My Unicorn is a Lesbian. Is Yours?"

"I'm Straight. But not Narrow"

The National Museum of American History recently received more than 400 buttons representing a snapshot of LGBT visual and textual culture spanning three decades from the 1970s through the 1990s. I helped Curator Katherine Ott organize the buttons into categories in order to better understand the scope and depth of the collection. In the process of cataloging and documenting the buttons' words and images, I was continually amazed by their diversity. There were protest buttons, buttons from marches and pride parades, buttons for gay-friendly destinations and businesses, and buttons to raise awareness around ballot initiatives, the AIDS crisis, and boycott movements. But to me, the most interesting buttons (and certainly one of the largest categories) centered on humor, puns, and a certain tongue-in-cheek affirmation of what scholars categorize as "queer culture." 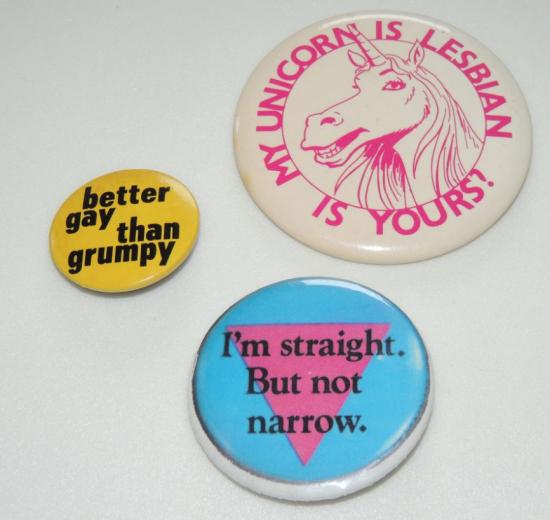 The use of humor, double entendre, and secret language is a well-documented aspect of queer culture and LGBT history. Often forced to speak in code or to use phrases with more than one meaning, gays and lesbians living before the era of gay rights movements and calls for civic equality resorted to a language filled with puns and humorous double meanings. Whether this was done as an affirmation within closed social circles or as a defense mechanism against outsiders overhearing queer conversation remains a subject of scholarly debate. What is clear, however, is that queer culture developed myriad uses for words with multiple meanings. Thus a "wolf" came to denote a man who preferred men, and possessed what many would consider the more traditional markers of masculinity, but the "wolf" moniker also suggested a man on the prowl who was perhaps a bit dangerous. "Coming out" borrows terminology used by elite and powerful families to describe their ritual of debutant balls; however, for gay men especially this phrase meant accepting and joining a network of peers within the world of urban, queer society. By taking a phrase regularly splashed across the society page of newspapers to describe a city's wealthiest and most privileged daughters' entrance into high society, and applying it to their own, often difficult entry into a much more hidden society, users of queer language set out to subvert norms and stretch meaning to almost comical extremes.
After 1969's Stonewall riots helped propel the LGBT civil rights movement into the public eye, gays and lesbians inherited this subversive but humorous language. Rather than abandon it, a new generation put it on display as a hallmark of a distinct culture. Thus the affirming and often-humorous buttons can be seen as a continuation of an earlier tradition—one that in many ways perpetuated the subversive tendency to rely on puns and double meanings. In fact, the button format itself is an interesting communication tactic. On the one hand, buttons are inherently public displays, placed on jackets and bags to be seen, read, and understood. On the other hand, they rarely are larger than an inch or two, requiring close contact and intimacy in order to be effective. Like the pun or double entendre, they are simultaneously both fully exposed and carefully hidden. 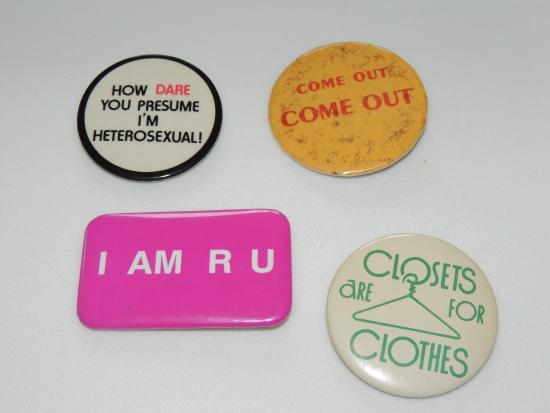 Thus a button with the letter combination "IMRU" exists as both coded language and an invitation to connect with others who are LGBT-identified. The button "How Dare You Presume I'm Heterosexual," evokes both campy indignation as well as a serious call to reconsider normative assumptions. "Come Out, Come Out," simultaneously references the sing-song cadence of fairy tales as well as serving as a modern-day statement for proudly self-declared "fairies." The use of language could also work in reverse. "Closets are for Clothes" is an attempt to retire a double meaning deemed demeaning and unhealthy—returning the term "closet" to its original purpose.

As the LGBT-rights movement grew in size and prominence during the 1970s and 1980s, the use of queer humor became more overt, graduating from small buttons to T-shirts, signs, and—later still with the advent of online media—readily shared memes, gifs, and photos. One milestone in this chronology came in 1990 when Skyler Hynes printed up some "Nobody Knows I'm Gay" T-shirts for a booth at the annual Los Angeles Gay and Lesbian Festival. In three months, Hynes had sold more than $30,000 worth of shirts, and went on to launch Don't Panic! Designs, which produced iconic T-shirts for LGBT's who came of age (and out) in the 1990s and early 2000s. "2QT2BSTR8" and "I Can't Even Think Straight" evoke the same techniques of wordplay that historians of LGBT history see in earlier eras.

While connected to their historical antecedents, the marketplace's assortment of consumer goods including T-shirts, buttons, coffee mugs, and refrigerator magnets ultimately helped alter the course of LGBT history moving forward. Though tempting to dismiss as campy or kitschy today, objects like these also were part of moving queer language and puns (and thus gays and lesbians themselves) into the mainstream. As the question of marriage equality recently advanced to the Supreme Court's ultimate affirmation, the new venue of online memes continued the tradition of relying on humor.

Thus the LGBT buttons currently being evaluated and processed can be seen as important pieces of American history—one born out of a need for secrecy and camouflage that later became a celebrated hallmark of queer culture for everyone to enjoy.

The manager of Museum Advisory Committees in the museum's Office of External Affairs, Daniel Gifford is a scholar of holidays (see his post on Thanksgiving cartoons) and the history of vacationing in America. Have a question for Daniel about the history of holidays, postcards, or other aspects of American culture? Ask in the comments and he may answer it in a future blog post!