Piano maker William Steinway woke up on March 12, 1888, and discovered "the most fearful snowstorm . . . I ever experienced" had buried New York City. Before the day had ended, he wrote in his diary, his carriage had become stuck three times and he had waded through knee-deep snow near his Gramercy Park home, having "a terrible time getting to my house at 6 p.m." Returning from a canceled theater performance, his wife and two adult children came home covered in snow. And so began the day that people from Washington, D.C., to New England experienced the Blizzard of 1888, a weather event so fierce that it's still a storm by which other East Coast storms are measured. 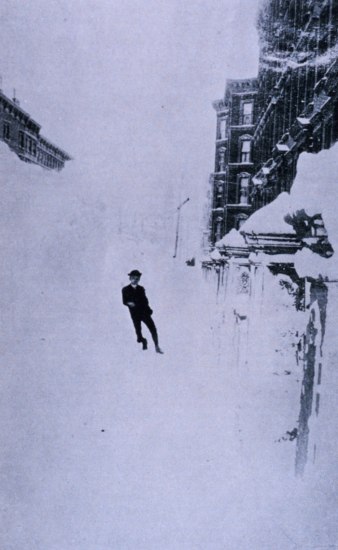 As the museum looks back at the 128th anniversary of the March 11–15 storm, the most compelling story is not just the damage that comes with any severe weather. Rather, it's the way that people were able to cope with a storm of the century, at a time when motorized snow plows (except those on locomotives) were just a frozen pipe dream.

On Saturday, March 10, 1888, the U.S. Signal Service, parent to the present National Weather Service, was predicting the storm from the South would dissipate or head out to sea. Instead, it collided with a cold front from Canada to create the storm of the century. So many telephone and telegraph wires were down that New York City initially was unable to communicate with the rest of the world. In Boston, the Daily Globe's March 13 headline was: "Cut Off."

Cities in the storm's path faced removal of "tons upon tons of snow, the largest amount to fall in two-and-a-half centuries of habitation," according to the comprehensive 1987 book Blizzard! The Great Storm of '88 by Judd Caplovich, which also cited oft-quoted figures of 400 fatalities, 200 of them in New York City.

William Steinway, president of the noted piano firm Steinway & Son and a leader in the German American community, provides a firsthand account of the storm in his diary, which he kept from 1861 until he died in 1896. The diary is in the museum's Archives Center, and, thanks to many years of transcription and research, you can now read the diary online. Steinway, who not only founded a world-famous piano firm but also created a residential village in Astoria, New York, built a beach resort and owned railroads and a motor company. He served on the commission that began the planning for the New York subway system, which was built in part to prevent the harrowing experience of 1888 commuters, who became stranded on elevated railways. 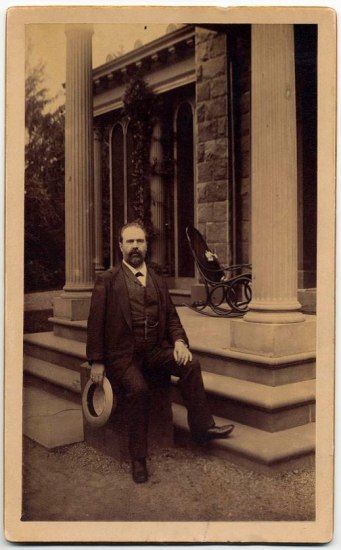 In mid-March 1888 however, the piano manufacturer wasn't thinking about subway tunnels. "Snowing stopped but intense cold has set in, nearly freezing me to death on the way," said Steinway's diary entry for March 13. He kept his appointments until late at night, getting around the city on a horse-drawn sleigh and returning "safe and sound" at 11:30 p.m. March 14: "It is again snowing hard, all business is suspended the workmen cannot reach factories, schools stopped, our R.R. horses starving for want of food, send George (his son) out to buy Oats, learn . . . that the roof of our (piano) key making factory was nearly blown off. Home in evg working." 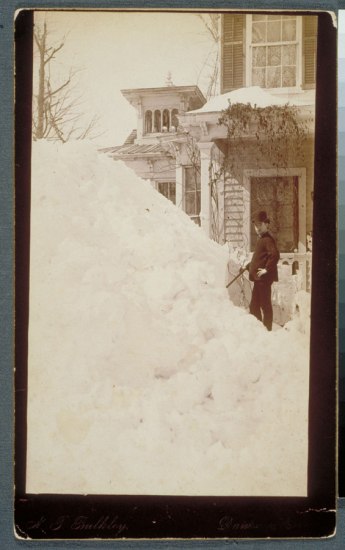 There was no stopping Americans' ingenuity in a storm with drifts that reached second stories of buildings in New York and other cities. It dumped more than four feet of snow in Albany and Saratoga Springs, New York, and Bennington, Vermont, according to snowfall statistics compiled in Caplovich’s book.

The New York Times and other newspapers related how the East and Hudson rivers in New York were frozen, but ice floes formed a natural bridge that allowed commuters to walk across. Men dug caves in the big snow banks and used boxes and barrels to build fires to melt the snow. Others turned streams of hot water on the heaps. If you couldn't get over a mountain of snow, you tunneled under it. Thousands of men were sent to free trains blocked for days. Passenger cars had wood stoves to keep customers from freezing to death, but as wood ran out, card tables and seats were chopped up for use as fuel.

A March 1988 Smithsonian Magazine article by Ezra Bowen, marking the 100th anniversary of the storm, told of a Mrs. M. Brusselars, who was trapped in her Hartford, Connecticut, house for three days with a dozen refugees. Food ran out, but she reported, "we found that under my back porch about 75 to 100 sparrows had gathered, so we killed some of them, made a few sparrow pies, which helped to sustain us." 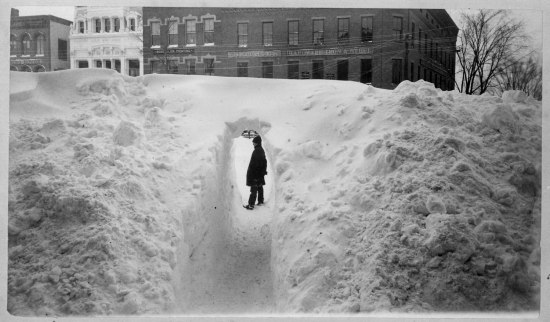 In 1888, there was little job security, and workers were docked pay for missing a day—even in a massive snowstorm. Caplovich's book tells the story of William Scribner, of Cannonade, Connecticut, a wire weaver. On the first day of the blizzard, he walked a mile from his house, staggered to his company's main gate, and heard the whistle signaling the start of the shift. "When he was just a few steps from the entrance, the guard locked the gate," the book said. "Despite the storm, management considered Scribner to be just another late employee and docked him a day's pay." 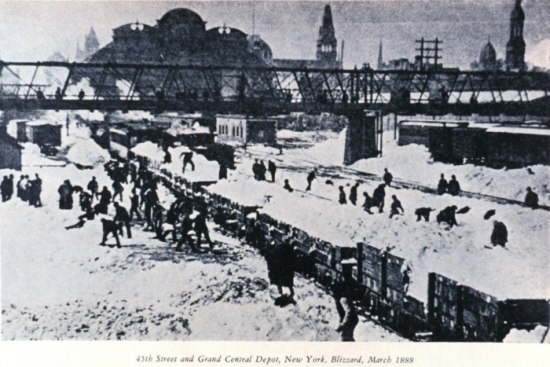 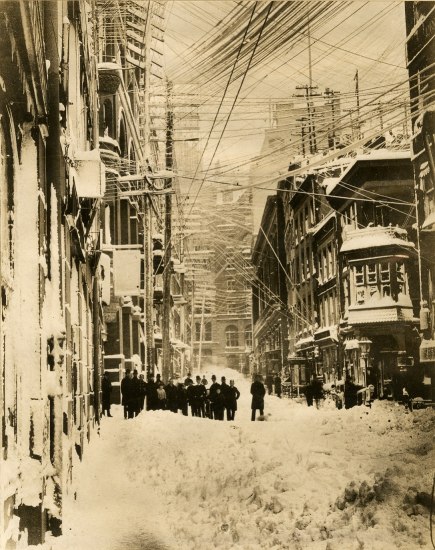 There were amazing rescues. Edward F. Leonard, of Springfield, Massachusetts, reached to pick up a hat on top of a mound of snow, Caplovich relates, and found an unconscious young girl. "Using only his bare hands in a fit of frenzied digging, Leonard managed to free the girl and carry her to shelter," the book said. She survived.

Some enterprising citizens helped others while making a few bucks—sometimes a lot of bucks—for themselves and their businesses. On a mild day before the storm, New York City department store buyer John Meisinger was called on the carpet because he purchased winter merchandise—snow shovels—at the end of the season. He was congratulated when the storm hit, and his purchase gave the store a quick $1,800 profit, according to Blizzard! The Great Storm of '88

Finally, there was the promise kept by the Barnum & Bailey circus to go ahead with its two performances at Madison Square Garden. "In the very teeth of the gale the matinee was given, and last evening the second performance occurred according to programme," the Times reported on March 13. Few seats were occupied, but P.T. Barnum attended the first show.

As the New York Times reported that day, Barnum commented that the storm might be a great show, but he still had the greatest show on earth.

Larry Margasak is a retired Washington journalist and a museum volunteer with the Steinway Diary Project. He has written three previous blogs based on William Steinway's life. Kathy Morisse is a retired international economist, and a Steinway Diary researcher who has written background information that expands on diary entries, with a focus on trips and modes of travel. Sincere thanks to the New York Historical Society, National Oceanic and Atmospheric Association, Connecticut Historical Society, and Forbes Library for the use of their photos from 1888. 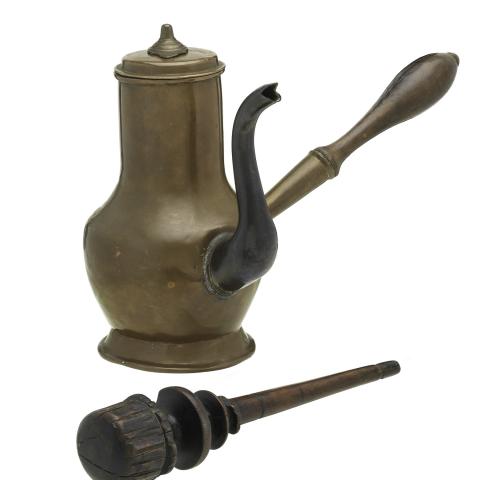 Cooking your way through this snow day with history
With an intense snow storm bearing down on the mid-Atlantic, we're looking to history and our collections to inspire us about how to eat,... 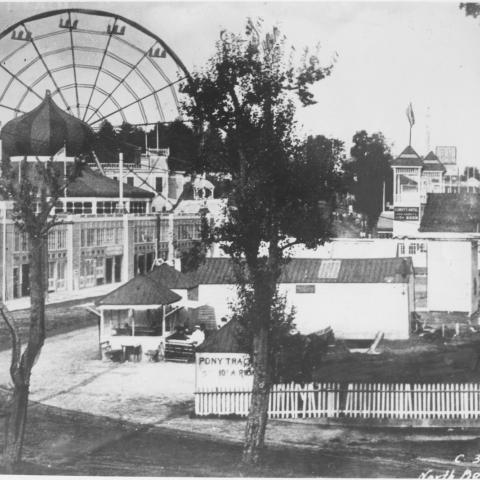