Coins: They're outta this world

Have you ever looked up at the night sky and wondered, "Who owns all of that?" Well, that's exactly what James Thomas Mangan did. He even took it a step further and went on to claim outer space on behalf of all humanity, naming himself as the First Representative of the Nation of Celestial Space. Now you may be wondering what this has to do with the National Numismatic Collection. Recently while combing through some gold coins, we discovered one of the last remaining legacies of this largely defunct nation in the sky: its coinage.

In 1949 Mangan declared Celestia a nation. The Nation of Celestial Space encompassed the entirety of the universe, as well as his home in Evergreen Park, Illinois. His goal in claiming Celestia was to prevent a single country taking political control over space. He attempted to have Celestia recognized by the United Nations and even sent letters to countries involved in space exploration, including the United States and the Soviet Union, asking them to cease their nuclear testing within the borders of his nation. Many of his requests and concerns were disregarded by these other countries. While Mangan dedicated over 20 years of his life to making Celestia a recognized nation, his efforts died with him in 1970, leaving the coins he minted as some of the final material evidence of his claim of Celestia's attempted sovereignty. 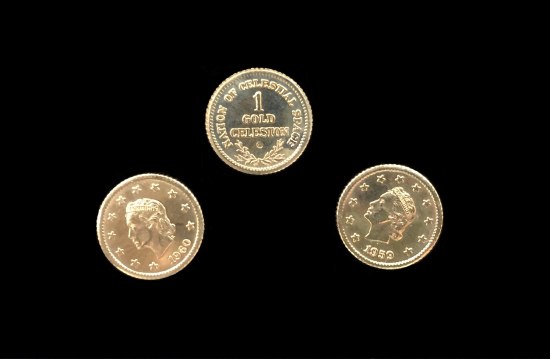 Mangan minted two different types of coins with their own unique denominations based on units of energy. In his own words, Mangan described his decision to produce coins to "prove the right of Celestia to issue its own currency, as a nation, which holds the only recorded claim to outer space, heavenly bodies exempted, in all history." The first is the gold celeston, minted from 1959 to 1961. While at first glance the celeston may look like it features a portrait of Liberty, it is in fact a portrait of Mangan's daughter Ruth Marie Mangan, whom he named as the Princess of the Nation of Celestial Space. Similarly to Liberty, she is also wearing a coronet, but instead of the word "LIBERTY," "MAGNANIMITY" is emblazoned across it. 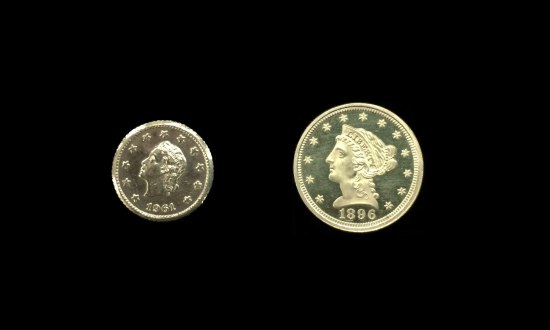 Mangan also minted a silver coin called a joule, which he described as "a coin equal in value to 10,000,000 Ergs of Celestial Energy." The decimalization of his currency is as follows: 100 Ergs = 10 Joules = 1 Celeston. In his donation letter to the museum, he goes on to say that he was "praised by NASA for basing a coin on energy, which does not change as years go by." He was referencing the fact that currency can be based on a variety of things. Today, our currency's value comes from its legal status rather than the materials used to make it. 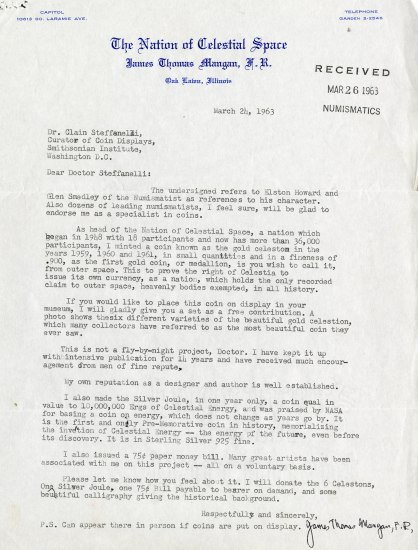 Mangan described his numismatic contribution as "memorializing the invention of Celestial Energy—the energy of the future, even before its discovery." Today we see these objects as an interesting numismatic lens through which to examine the history and development of this little-known micronation.

Hillery York and Jennifer Gloede are collections staff in the National Numismatic Collection—a collection so vast and diverse, it's truly out of this world.