What can two 19th century cartoons reveal about disease and hysteria?

Every few years, we read the headlines about a new, or resurgent, disease that threatens global health. Fears of transfer erupt and hysteria sets in, at least in the initial months. If someone coughs in public, I'll recoil in concern; who knows if they have this year’s contagious disease? Every stranger becomes suspect. Of course, a more rational version of myself would realize that a cough could be caused by anything. 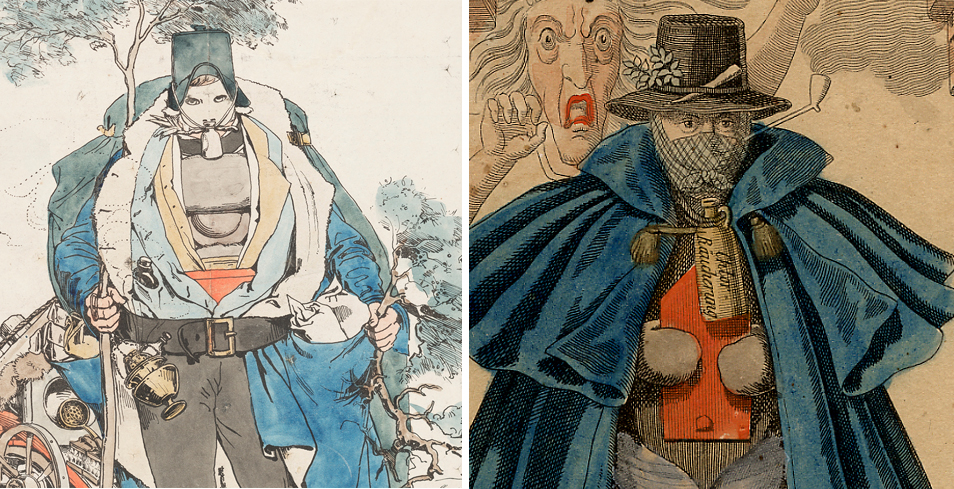 When it comes to disease, fear of air quality and of strangers has historical roots. One of the first epidemic diseases to excite worldwide hysteria was cholera. According to Dr. Margaret Linley, cholera became "a media disease," through the explosion of widely disseminated writings and images that intensified fear of the disease. Likewise, the historian Christopher Hamlin, explains, "it was the magnitude of the reaction to it that cholera stands out as the signal disease of the 19th century." Despite its extensive media coverage, cholera was far from the greatest killer of the 19th century (compared to malaria and tuberculosis) and rarely visited western nations.

We now know that the Vibrio comma is a marine organism that spreads through infectious vomit and fecal matter (that can contaminate food, water supplies, and even linen), but cholera remained a mysterious disease throughout much of the 19th century. When it first reached Europe and North America in 1832, cholera came as a shock to 19th century sensibilities as fluids streamed uncontrollably from both ends. Dehydration turned skin a deathly blue, made eyes appear sunken, and thickened the blood. Its onset was sudden and it could kill within hours. This initial visit would kill thousands and "King Cholera" returned to western nations four more times during the century. 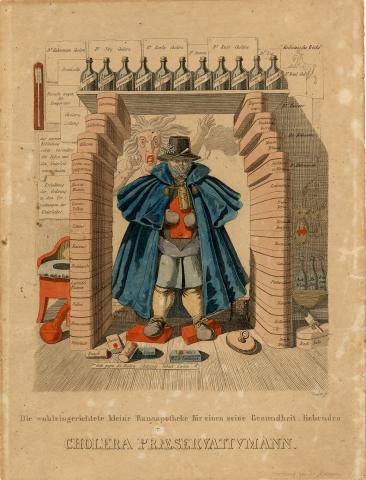 While researching cholera for my advisor at the museum, I found two seemingly humorous cartoons dating to the 1830s in the museum's Medicine and Science collection. These images were first loaned to the museum—when it was still the National Museum of History and Technology—in 1945 as part of a collection of European pharmaceutical artifacts from the 15th to 19th century. Both titled "Cholera Prevention Man," they depict a man covered from head to toe in protective layers in an attempt to safeguard himself from the oncoming cholera epidemic. Germ theory had not been developed, nor was the cause of cholera understood, but bodies were still in danger. Medical writings and images were internationally exchanged, as Western nations tried to find cures and explain the horrifying disease.

The first image illustrates many 19th century remedies and preventatives for cholera. Wrapped around his waist is a grey "cholera belt" (a thermal remedy primarily used by British soldiers in order to keep the body warm), while a mask and container of camphor or vinegar vapors envelope his face in an effort to neutralize any cholera miasmas that tainted the atmosphere. He stands in a doorway made of boxed medicinals (such as calomel, cayenne pepper, and laudanum) as well as other treatments for cholera: a clyster and hot water bottle (to administer enemas) and a commode. The words roughly translate to "a well stocked home to prevent cholera." However, the ghostly apparition of cholera still lurks behind the man. Desperate people stocked their “medicine cabinets” with numerous treatments and remedies from both medical men and quacks alike that ranged from sadly ineffective to wildly dangerous.

The second cartoon (published both in German and English) is a satirical comment on the effectiveness of the overabundance of protective items that were sought out as fear of the approaching cholera pandemic grew. In the English version of this cartoon, the caption warns: "By exactly following these instructions you may be certain that the cholera… will attack you first." Early theory established that cholera was not contagious because filth and overall poor sanitation that produced miasmas in the air were attributed to its cause. 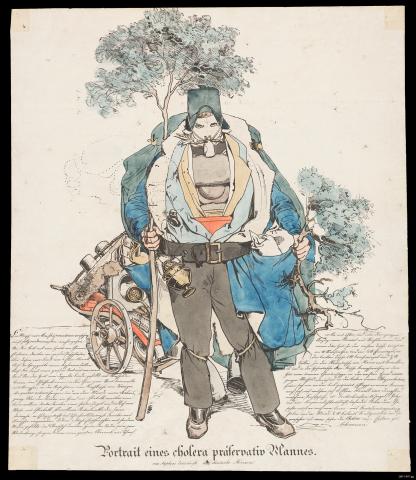 The Cholera Prevention Man. Moritz Gottlieb Saphir, Germany and England, ca., 1832. Thousands of copies of this image were produced and disseminated. Image from the museum's Medicine and Science collection.

Both cartoons express this miasma theory through their concern with purification and sanitation (the man has both a juniper bush and vapor mask to purify the air). Yet, in mocking the effectiveness of the protective items, the cartoon expresses a widespread uncertainty regarding cholera's contagiousness since it was known to travel along trade routes over land and sea. This uncertainty of the disease's contagiousness is reflected in the ex-mayor of New York's, Philip Hone's, personal writings on September 20, 1832, "It is stated that forty-nine thousand five hundred and sixty-nine emigrants have arrived at Quebec… a large proportion find their way into the United States destitute and friendless. They have brought the cholera this year, and they always bring wretchedness and want."

Cholera became intertwined with the anxieties over the health of the social body. Not surprisingly, poverty and immigrants seemed to attract the disease. Cholera did strike its victims disproportionally from the poor; however, in the 19th century a life of filth and ruined morality was largely seen as a personal choice, instead of a result of poverty, poor infrastructure, and a lack of resources. Both cholera and immigration influenced newly forming cities. While Western nations became increasingly involved in the global world in the 19th century, there were increased global movements of people, especially from non-Protestant and non-white backgrounds. In America, the threat of cholera was one of the biggest concerns proposed by those who supported restricted immigration. Two of the earliest International Sanitary Conferences (the predecessor to the World Health Organization) grappled with the issue of cholera's contagiousness as well as with the attempt to coordinate measures to prevent cholera's spread from India (as it was regarded to be the home of cholera) into Europe.

In Western nations, huge capital investments in water sanitation created cholera-free cities while other measures within cities began under public health movements in order to track the disease and prevent its spread. However, the stigma of filth as a cultural choice is still prevalent as countries in Africa, South Asia, and South America deal with the seventh pandemic that has been raging since the 1960s as a result of a lack of infrastructure and resources.

Kayla Reddecliff is an intern in the Medicine and Science department. One of her favorite areas of study is the history of fashion, so disease prevention costumes were a perfect fit.