Even in the dimly lit gallery, it shimmers and demands attention. At just over three feet long, it features a silver grip, a deep burgundy gem-tipped pommel, and a blade decorated with gilt incised leaves and a Union soldier holding a guidon. It bears the inscription “Presented to Major James M. Green, 48th Reg. N.Y.S.V./ by the Members of Company F.” 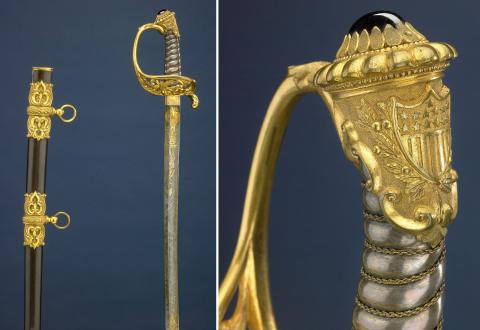 This 152-year-old sword and its equally ornate scabbard recently made a five-hour trek northward, from the Smithsonian’s National Museum of American History (NMAH) in Washington, D.C., to the Long Island Museum, a Smithsonian Affiliate, in Stony Brook, New York. The occasion? An exhibition titled Long Island at War (inspired by NMAH’s Price of Freedom: Americans at War), which examines the deep and rich military history of this 120-mile stretch of land east of Manhattan.

The sword’s first owner: James M. Green
More than 35,000 Long Islanders served in the Civil War. Dozens of Union military companies and regiments from Brooklyn to Montauk built their forces from porch gatherings and meetings at town halls or village post offices. The young recruits eventually saw action at some of the war’s most horrific battlefields. 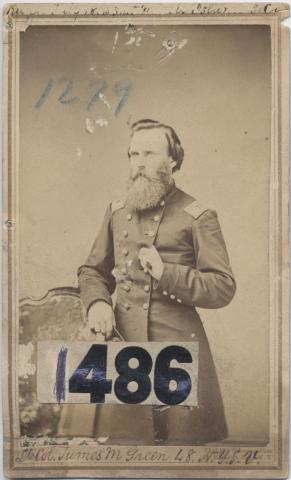 Photograph of James M. Green, after being promoted to Lieutenant Colonel, 1863. Courtesy of The New York State Military Museum.

One of those heeding the call was James Martin Green, a 32-year-old Brooklyn resident at the start of the war. After a brief stint as a private in the 71st New York Regiment, fighting at the First Battle of Bull Run, Green re-enlisted in the 48th Infantry as a Captain in command of Company F, in August of 1861. Upon promotion to Major in June of 1862, Green was presented with this sword. Later that year, he was advanced to Lieutenant Colonel.

The following summer, alongside the African American soldiers of the 54th Massachusetts Infantry Regiment, Green and his men took part in a major assault of the Confederate-held Fort Wagner, on Morris Island, South Carolina. On July 18, 1863, Green was one of several officers killed during the advance. A compatriot who fought beside him remembered Green being “last seen alive astride a rebel cannon sabering the men who were serving it.” His remains were buried in a mass grave and never properly recovered.

In 1932, the fallen soldier’s niece, Georgiana Ring Green, donated her uncle’s remaining Civil War possessions—his shoulder straps, his field saber, and this presentation sword and scabbard—to the Smithsonian. The presentation sword has been on display before in Washington, but was off view last year when the Long Island Museum requested it for loan.

Moving a treasure
It truly “takes a village” (or maybe a “platoon”) to prepare and move a national treasure! The process started in the summer of 2013 when I visited NMAH Curators Kathleen Golden and Dave Miller at their amazing collection storage facility to research and view the sword. 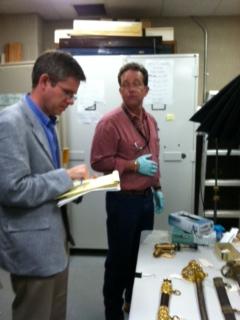 From that point forward, a team of talented folks from both institutions provided their services to bring James Green’s sword back to Long Island: collections managers, conservators, and art handlers. After the museums agreed on a suitable plan of travel and display, the sword and scabbard received conservation treatment to remove a small amount of corrosion. After being carefully packed, art handlers delivered the sword and scabbard to the Long Island Museum three weeks prior to the exhibition opening.

Long Island at War features over 200 artifacts loaned from more than 20 institutions and private lenders, but nothing stops people in their tracks quite so much as this shining memento of America’s most devastating war.

Joshua Ruff is the Director of Collections and Interpretation at The Long Island Museum of American Art, History & Carriages a Smithsonian affiliate museum. Long Island at War is on view through December 28, 2014. The Long Island Museum, in Stony Brook, New York, features a nine-acre campus with three nationally-respected collections of American art, historic artifacts, and horse-drawn vehicles. The museum regularly features changing exhibitions and public programs on a variety of cultural topics. See more presentation swords in the National Museum of American History’s collection.