On January 6, my wife and I watched the live news broadcasts in disbelief at the scenes unfolding on television, as a violent mob stormed the U.S. Capitol and interrupted the constitutionally mandated joint session of Congress presided over by the vice president to ratify the 2020 election results. Often curators like to hold off on collecting about an event until the weight of history can sift and settle; other times, we have to move quickly, or we’ll miss our chance.

Knowing that many objects from the day’s rally and attack on the U.S. Capitol would quickly be discarded, I volunteered to go down to the National Mall and see what I could find. With approval secured an hour later, I pulled together the usual COVID-era curatorial “field kit” for the morning’s work: tote bags, gloves, face mask, business cards, identification badge, and a mental list of imagery and objects I had seen in news footage the day prior.

As I parked along the National Mall around an hour later, I saw a scene before me of routine. Cleaning crews were hauling away bags of trash and walking the grounds picking up loose material. I could see the first protest signs sticking out of trash cans lining the emerald grass fields. My collecting approach was simple: save materials clearly related to the rally and the attack that followed.  The materials, devoid of their creators and users, constituted little more than trash unless saved and contextualized. With time of the essence, however, I could not stop and analyze every item. Instead, I essentially skimmed through the mass of material to pluck out items related to the rally and to COVID-19, as well as related 2020 campaign materials.

Every potential item offered history, but also the risk of contamination. Collecting under “normal” circumstances is tricky enough, but now I contend with the danger of exposure to COVID-19. Suffice to say, I wore a new mask and carried half a dozen pairs of nitrile gloves. After placing the first few signs in the trunk of my car, I began walking toward the Capitol. I saw small business cards, handouts, and leaflets in the bushes, scattered along the ground or tossed in the trash. As news media provided live updates from the National Mall, nary a camera or person noticed the solitary individual wearing rubber gloves, a grocery tote in one hand and a pile of signs in the other, digging through the trash cans.

Crossing over Seventh Street SW, the protest-related paraphernalia increased in volume and variety. Before reaching Third Street SW, I could see two large signs leaning on a signpost. One read “OFF WITH THEIR HEADS – STOP THE STEAL,” while an adjacent sign, ripped from the post, featured a smoking skull with a blond toupee bearing a similar message, “STOP THE 2020 STEAL.” Scooping up the two aluminum signs, I crossed over the street past a row of Virginia State Police cruisers and entered the grass of Union Square just west of the Capitol Reflecting Pool.

The first large item to greet me? A wooden structure on its side with signs affixed to the base. A square piece of plywood read “THIS IS ART.” Graffiti from a variety of hands covered the legs and sides of what I recognized as gallows, sans noose. Unable to remove pieces of the structure, I opted for photographs of the graffiti, with Indiana, Kentucky, Massachusetts, Pennsylvania, and Virginia referenced in ink amongst notes such as “Where are you Thomas Jefferson?! Revolution 2021!!!,” “hang the thieves,” “hang treason,” and “God Bless the USA.” A short distance ahead of me in front of the Capitol Reflecting Pool, a man waved the “Don’t Tread on Me” Gadsden flag, and exchanged curt comments with a few people seeking insight.

Walking around the pool on my way up to Capitol Hill, a line of Metropolitan police officers mingled with an array of law enforcement officials from Virginia and from assorted federal agencies. Reaching the Ulysses S. Grant Memorial, a small crowd of maybe 20 stood in front of temporary fencing. Across First Street NW were uniformed National Guard troops, spaced 10 or 20 feet apart. The morning joggers, seemingly oblivious to the events of January 6, robotically moved along, pausing only when the troops directed them to move away from the Capitol. The battlefield of the previous day could be seen ahead. The most visible damage was ripped white material hanging in shreds from the scaffolding erected for the presidential inauguration of Joseph Biden on January 20. Stillness and an exhausted tension permeated the air.

Upon the ground were pieces of discarded equipment from an angry, invading force: signs, banners, a red bag of booklets including “The Continuing American Revolution.” An unknown hand had scratched “TRUMP” in the mud with a stick. I found a sign nearby reading “We’re Right We’re Free We’ll Fight You’ll See.” Hands full, I returned to my vehicle to drop off a dozen or so signs. For the next few hours, I returned several times to fill the trunk of my car, working automatically rather than attempting to digest the various messages and symbology of the objects. As a curator of military history, I felt contextualizing the political nature of these potential artifacts was best left to my political history colleagues. Following the sweep of grass around Union Square and the reflecting pool, the trash cans along the mall took priority.

Words fail to describe the “joy” of rooting through public trash cans in search of protest-specific detritus. But between masses of discarded coffee cups, bags of dog waste, empty cigarette packs, and empty liquor bottles could be found other remnants of the previous day. A folder filled with photocopies of “The Battle Hymn of the Republic,” the lyrics of which abolitionist Julia Ward Howe penned a mere mile away, 160 years ago. Flags, so prevalent in the imagery of the sixth, proved elusive. At last, a hint of blue fabric offered hope but proved instead to be a unique item, the word “PENCE” crudely cut off a banner. Farther down the mall, a small “Trump 2020” flag emerged from within the trash—accompanied by a small, mud-stained American flag. Half a mile away, our nation’s most celebrated flag, the Star-Spangled Banner, rested alone in a climate-controlled chamber, free of the COVID virus likely contaminating the material I had just collected. After three hours of walking up and down the National Mall, hands stiff from the cold, I decided to head home and report my progress to my supervisors.

The late Senator Robert Kennedy once said, “Few will have the greatness to bend history itself, but each of us can work to change a small portion of events.” Museum personnel are blessed with opportunities to save a small portion of events across our country, fragments of the present to help future generations understand and interpret one cold Wednesday in our nation’s capital. The events of January 6 will be debated for ages hence. The dirtied, scarred signs and artifacts collected the morning after will hopefully serve as physical reminders of the fragility of civility—and democracy.

Editor’s Note: The Smithsonian's National Museum of American History will accept a selection of the ephemera brought in as part of rapid response collecting related to the January 6 protest rallies prior to the siege on the Capitol. Materials that are not selected for the permanent collection may be made available to other museums or historical associations. 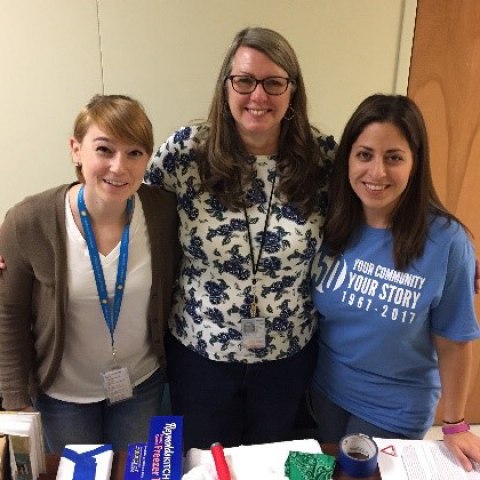 Preserving family treasures after a hurricane—and leaving the spiders alone in the basement
Beside piles of rubble, The Donut Palace was open for business. The image of the little donut shop, defiantly open in the face of the...