With the academic year in full swing, schools across the country are beginning their first rounds of fire drills. Remember those? As alarms blare and lights flash, teachers calmly evacuate their students from the building as the students chat with their friends. To them, it is just another annoying fire drill that they will never actually have to use. But on March 4, 1908, Lake View School in Collinwood, Ohio, went up in flames when a furnace overheated, taking with it the lives of 172 students, as well as two teachers and one rescuer. It was the worst school fire in the history of the country and set in motion the development of easy and safe evacuation routes, including fire exits with safety bars, for schools and other public buildings. 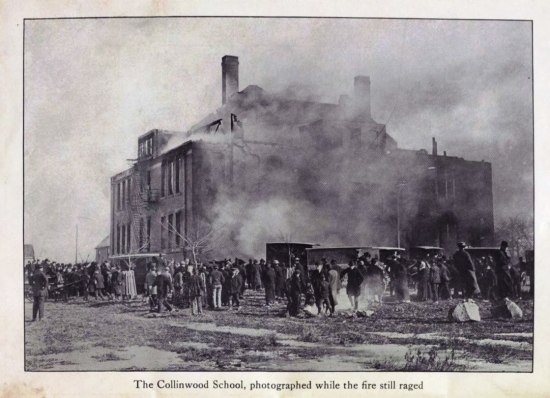 The Lake View School was a four-story building where approximately 366 students between kindergarten and sixth grade went to school. Its outer walls were built of stone, but the majority of the inside was constructed of wood and supported by large wooden beams. In addition, the floors were oiled, a common practice of the time, which quickly fueled the fire. The layout of the school was also problematic. The main staircase ran from the front door on the ground level all the way to the top, with no fire doors or exits. This meant that once the ceiling joists above the furnace caught fire, the stairwell acted as a chimney, quickly spreading the fire. The building burnt so quickly that escape routes were blocked within minutes. Anyone trapped inside had to either quickly descend the staircase or get out through the fire escape on the top floor.

After the fire, many blamed the school's custodian, saying that he left one of the main exits locked so that even when students reached the door, they were trapped. Parents were able to break windows and pull some children out, but most were stuck behind the thick wooden doors. Many have mistakenly blamed the doors for opening inward, though they actually opened outward. It appears that it was the type of doorknob latch that was the culprit. Large numbers of panicking children could not open the latches and ended up crushing each other in an effort to escape.

Because of the tragedy in Collinwood, fire safety regulations were changed not just in schools, but in public buildings all over the country. Exit routes and fire escape designs were altered. Doorways were widened and new doorknob styles were put into use. 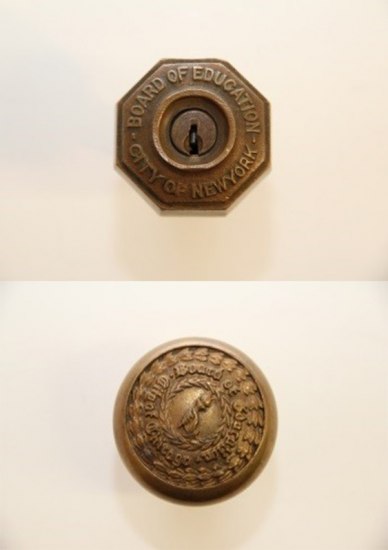 As part of the education collection here at the museum, we have 18 doorknobs from the early 1900s that were used in schools across the country. As can be seen in the images above, many of them were beautifully decorated and much more ornate than today's doorknobs. Knobs were decorated with a wide variety of motifs ranging from simple ones imprinted with a city name to ornate ones decorated with scenes of learning. A simple knob is shown above from the city of New York. Aside from the inscription around the border, it is plain but unique because of its octagonal shape and key hole. An example of more elaborate use of imagery and symbolism is seen in the knob to the left from the city of Chicago. The center of the knob is an image of a torch, which often represents knowledge and learning, and its border is surrounded by fig leaves. 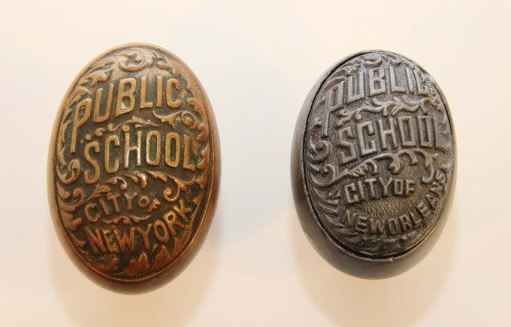 Doorknobs were produced for specific schools, often customized at the request of the school board. For example, in 1896, the New York City Board of Education overhauled its schools in an attempt to modernize them. Heading up the project was Charles B. J. Snyder, building superintendent, who designed almost 350 schools in the Gothic style. Shown above are examples of doorknobs for the cities of New York and New Orleans made by the Sargent Company. The knobs are oval in shape, which one does not find very often these days. Noticeably different is the patina on each knob. The New York knob is made of cast brass, as opposed to several pieces soldered together. Brass was a common material because of its resistance to rust. The New Orleans knob is made out of a cast metal. 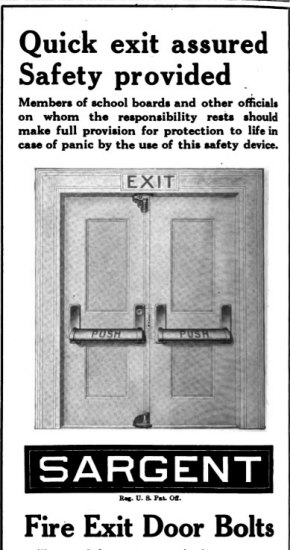 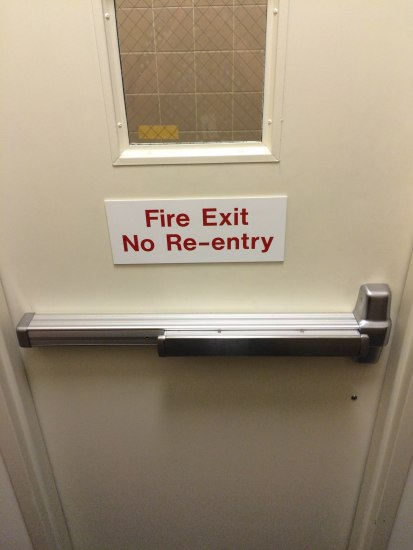 In addition to changes in doorknobs, crash bars (also called panic bars) were added to exit doors much like the ones we have today. Shown above are two examples of panic bars, one from the early 20th century and the other from the late 20th century. The latter is a modern example of a panic bar, based on the earlier Von Duprin model.

The man who originated the concept, Carl Prinzler, was inspired by the 1903 Iroquois Theatre Fire in Chicago, in which almost 600 perished because of locked doors. He enlisted the help of architectural engineer Henry DuPont to develop a way for doors to be locked from the outside but still allow persons on the inside to leave quickly in the case of an emergency. After the tragic loss of life in the Collinwood Fire of 1908, the first model was produced by the Vonnegut Hardware Company. Buildings are now made of more fire resistant materials, such as walls and floors with much less flammable finishes.

In the time around Fire Prevention Week, pause to consider how to evacuate your building if there were a fire. Most likely there is an easily marked route on a map somewhere on a wall, one that ends at a door with a panic bar. While not as attractive as the fancy metal doorknobs of the early 20th century, panic bars provide a practical and safe method for egress during a fire.

Sarah Crosswy is a graduate of the College of Wooster and after being an intern working with curator Debbie Schaefer-Jacobs in the Division of Home and Community Life is continuing as a volunteer. She is assisting in cataloging the Dr. Richard Lodish American School Teaching Collection, a recent acquisition. 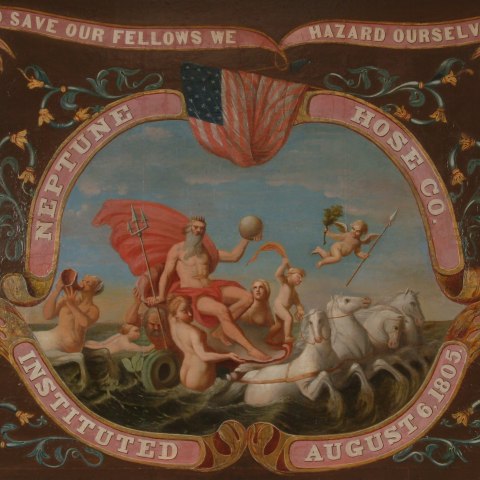 I say "Always Ready." You say "Semper Paratus."
Our fire engine has a secret message. For a few years now, this hand-pumped engine has been on display on the museum's first floor. For a...