Two documents reveal the high tech significance of merchant and entrepreneur Cyrus W. Field's anniversary party, 124 years ago today. Connie Holland, Project Assistant in the Division of Medicine and Science, has the story. 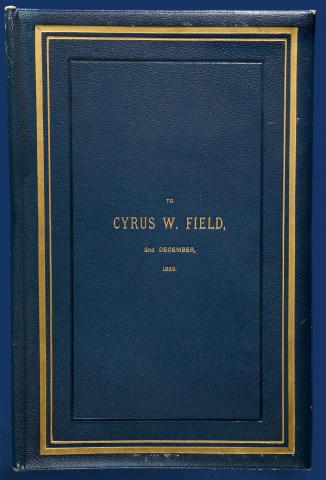 Front cover of the folio

While working on an inventory project, one particular object caught my attention, a beautifully bound folio presented to Cyrus W. Field (1819-1892) on the 2nd of December 1890. Upon opening the folio, I found it to be a proclamation presented to Field and his "amiable and devoted Wife," commemorating their "Golden Wedding Day." Wife? I read the entire announcement and found to my annoyance no mention of her name. In fact, the majority of the script lauded Field's accomplishment with submarine telegraphy. The late 19th century obviously had different attitudes toward women. 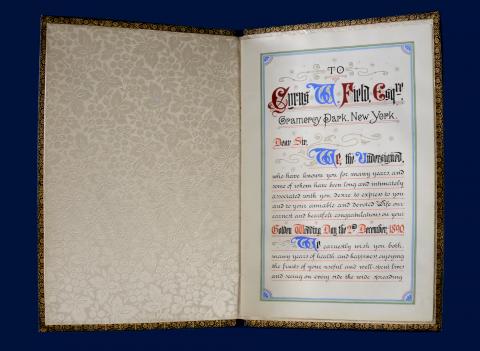 Inside the folio, a message of congratulations to "Cyrus. W. Field, Esq. Gramercy Park, New York"

Fortunately, another object in the collection, an oversize certificate also celebrating the Fields' anniversary at least gave me her name. Mrs. Cyrus W. Field was actually Mary Bryan Stone (1820-1891). Great! But what was the story behind these two documents beyond the obvious the celebration of the Fields' 50th wedding anniversary?

Our recent inventory project rehoused and inventoried papers which belonged to Cyrus W. Field. Field helped to accomplish a feat that seemed impossible—laying a submarine telegraph cable across the Atlantic. A wealthy merchant and entrepreneur, Field organized the business backing for the cable project and saw it through many difficult years.

As it turned out, the original anniversary celebration at the Fields’ home was planned to be quiet one for close family only. However, old friends were invited and that swelled the number of people to between 400-500. The event even attracted press attention. One account mentioned over a thousand revelers, which seems unlikely and differs from other recollections of the time. One of Cyrus' brothers, Rev. Dr. Henry M. Field organized a renewal of vows witnessed by those in attendance as attested by the signatures on the oversized certificate.

The certificates presented to the Fields represented both the business and social facets of their lives. The British folio lauding Cyrus' accomplishments with submarine telegraphy was signed by Prime Minister William Gladstone and over 60 other people who were "recognized as among the foremost in England." Among those involved with the submarine telegraphy project were William Thompson (later Lord Kelvin), Robert Dudley, and Latimer Clark. Other names were social in nature and among eleven signatures "authorized by letter" we see writer Oscar Wilde and his wife Constance. 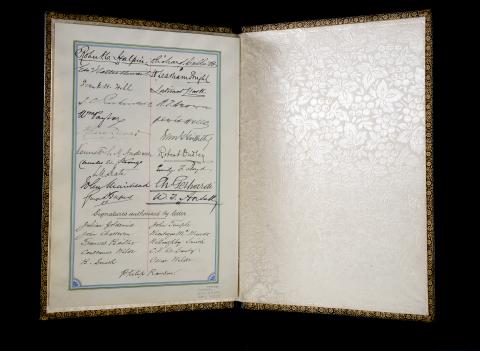 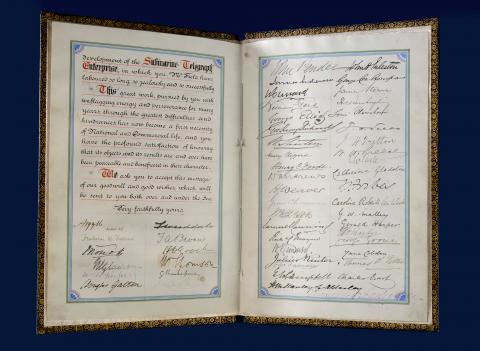 The interior of the folio contains signatures and mention of the Submarine Telegraph Enterprise, "in which you Mr. Field have labored so long, so zealously and so successfully."

The American certificate was more personal and contains over 200 signatures from members of the Field family and the social elite who attended the anniversary party. Among the well-known signatories was William Tecumseh Sherman, major general for the Union Army during the American Civil War, who passed away soon after. Thomas Gallaudet, son of the founder of Gallaudet University also signed. One of the many family members who signed was their daughter Isabella Field Judson, who donated the collection of items to the Smithsonian in 1897. 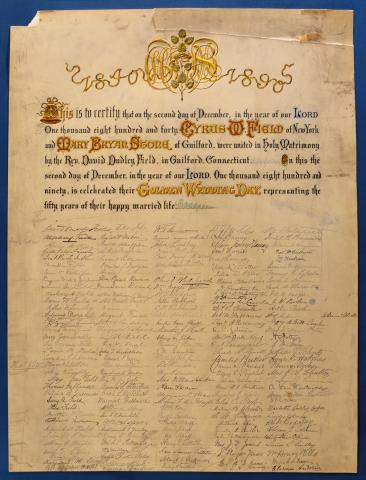 That so many famous and important people recognized Cyrus and Mary's anniversary shows how important the Atlantic cable project was seen to be. The British interest is not surprising since most of the money and much of the technology came from the U.K. Americans also understood the significance of direct communications between Europe and America. The cables were a big deal and Cyrus had been instrumental in the project. The party grew large because many people wanted to add to their own social or political standing by being associated with such a famous person and event.

Connie Holland is a project assistant in the Division of Medicine and Science. Learn more about under water cables.