Skipping work and heading to the game is a tradition older than stadium lights and even center field fences. And that’s what William Steinway, of piano company fame, did on September 1, 1894. Just in time for the World Series, Volunteer Researcher Larry Margasak has the story.

William Steinway, known for his famous piano company, held a board of directors meeting September 1, 1894, and then did something that millions of Americans have done to escape the office.

He took the rest of the afternoon off and went to a baseball game. 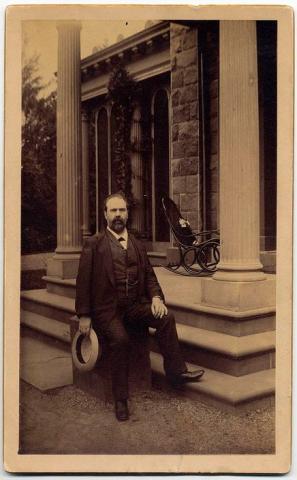 Piano manufacturer William Steinway at his mansion in Astoria, Queens, New York, around 1885. If William was alive today and wanted to see a major league game while at the mansion, he would be only 3.9 miles from the Mets' Citi Field.

It was baseball at the end of summer. The crowd was large for its time. William's hometown New York Giants were fighting for a pennant. And he was disappointed in the outcome.

We know a lot about William Steinway, born in 1835, because his diary (1861–1896) is part of the Smithsonian collections at the National Museum of American History's Archives Center. Thanks to many years of transcription and research, you can explore the diary online.

William was likely in a good mood on September 1, 1894. He wrote that his 2-4 p.m. Steinway & Sons board meeting disposed of "a mass of important questions, very harmoniously." He continued:

"I then drive to Polo grounds 155th str. & 8th Ave. and see a most interesting baseball game between Cincinnati +New York. At lest 15,000 spectators are there."

William doesn't mention that he likely saw just the second game of a doubleheader, and it was called on account of darkness. William only learned the final score the next day, writing on September 2, 1894: "Lovely day. I notice from the Newspapers that the Cincinnatians defeated the New Yorkers on the Polo grounds yesterday."

He was only partly right. The Giants lost the first game and won the second by the identical scores of 8-6. The attendance in the box score of the second game was 12,000. And the reporters who covered the doubleheader wrote of what then appeared to be a missed opportunity in the pennant race, since the 68-38 Giants were playing the 45-60 Reds.

The New York Times account noted the Giants "failed to take advantage of a rare opportunity to gain on Baltimore and Boston." The doubleheader split, the writer said, "was anything but pleasing" to the fans and he noted, "The time for closing on the leaders is growing short…" The New York Tribune's reporter was even less kind to the locals. He noted that the team "would now be ahead of the Boston champions had the local players won those two games from the Porkopolitans…" Instead, he wrote, "The Giants did not play with that snap and abandon" they exhibited in the previous game against the Boston Beaneaters." (Yes, the Beaneaters.) 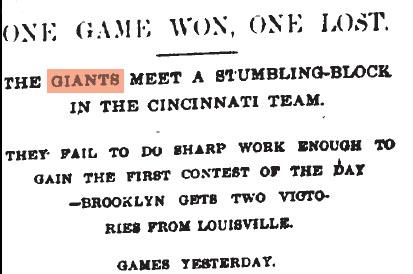 "One Game Won, One Lost" reads the headline of this New York Tribune article on September 2, 1894

The Giants in 1894 finished second in the only existing major league—the National League—with an 88-44 record, three games behind the Baltimore Orioles. But that was good enough. The modern World Series didn't begin until 1903 but from 1894 through 1897, the first and second place National League teams played for the "Temple Cup." The trophy—donated by Pittsburgh Pirates owner William Chase Temple—was awarded to the winner of a best-of-seven, post-season championship series. The second place Giants defeated league-leading Baltimore four games to none, sweeping the series on October 8.

The Polo Grounds III that William visited gives us a window into the baseball of that era. According to an article by author Stew Thornley, supplied by the National Baseball Hall of Fame in Cooperstown, New York, center field was 500 feet from home plate. It was, Thornley wrote, "far enough away that the well to do could park their horse-drawn carriages beyond the ropes that delineated the playing area and watch the game from there." The Tribune reporter who covered the doubleheader wrote, "there is evidently plenty of money hereabouts with which to gratify the appetite for baseball…" 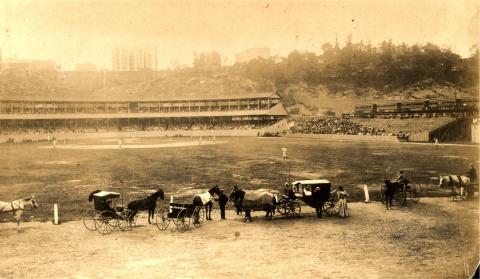 Nearly five months after William saw the Giants play, the team's ownership changed hands, leading to a tumultuous era for the team and baseball.

The new owner was Andrew Freedman. In Baseball: An Illustrated History by Geoffrey C. Ward and documentarian Ken Burns, Freedman is described as a real estate baron with Tammany Hall connections.

Freedman, the book relates, "insisted on picking his own umpires, barred from the Polo Grounds any sportswriter who dared criticize him, launched 20 libel suits in a single year, sold off good players if they did not treat him with proper deference, and hired and fired a dozen managers during his eight years as owner of the team." Burns and Ward wrote the acclaimed PBS documentary on baseball.

William Steinway died in late 1896. There's no indication he was concerned about the New York Giants after attending the game in 1894. In fact, the word "baseball" did not appear elsewhere in his diary—neither in his remaining years, nor in the 33 years of entries before he attended the game.

But at least for the late afternoon at the start of September 1894, William Steinway chose baseball over pianos. And had a great time.

Larry Margasak is a retired Washington journalist. He is a volunteer with the museum's ambassadors, who roam the building to assist visitors. He also is a researcher/writer with the Steinway Diary Project of the museum's Division of Culture and the Arts; and museum's Archives Center. If you would like to join the research team, email steinwaydiaryinfo@si.edu.