Dogs for defense: how Skip, Spot, and Rover went off to fight World War II

Imagine being asked to contribute your best friend to the war effort, if your best friend has four legs, is furry, and goes by the name of Max. These days, you would probably think the request outrageous. After all, our dogs are more than just pets; they are our best friends and our children. It's unthinkable that we would send them off to fight a war thousands of miles away. But that's precisely what many people did during World War II to do their part for the war effort: they gave their cherished family dogs to the U.S. Army in the name of patriotic duty. 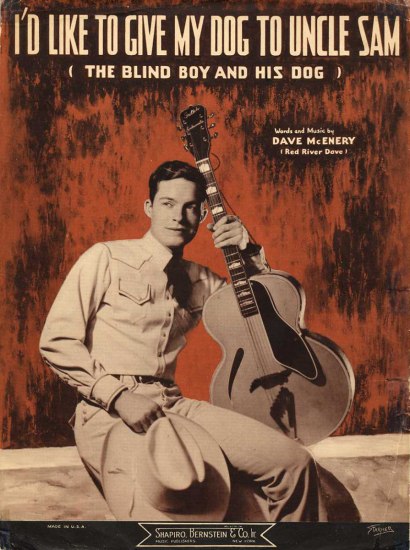 Even the "blind boy" in Red River Dave's song "I'd Like To Give My Dog To Uncle Sam" donated his dog:

My Rover, he can hear a mile away
and he can see at night as well as day
I'll get along somehow
If my country needs him now
I'd like to give my dog to Uncle Sam 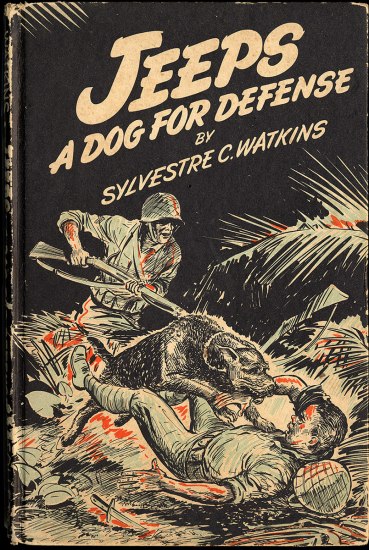 Dogs have been used to fight wars since Roman times, if not earlier. The first modern army to employ dogs trained as messengers, scouts, and sentries was the German Army, in the late 19th century. They used dogs again in World War I, as did the British and French armies. The American Army brass, however, could not be convinced that dogs would be of much use in modern warfare and steadfastly refused efforts to create a K-9 Corps until the advent of World War II. They had to be convinced by civilians that dogs had capabilities that would not only free up soldiers to fight, but would also save soldiers' lives. 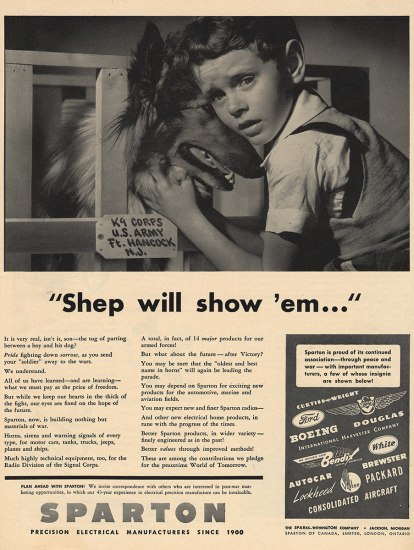 The idea for the Dogs for Defense program germinated shortly after the bombing of Pearl Harbor in December 1941. The prominent breeders and trainers of the dog-show world got together to create a program appealing to the American public to donate their pet dogs to the war effort. Initially, various breeds of dogs were requested, but only if they were purebred. They could be either sex, but had to be between one and five years old and exhibit watchdog traits. And, like GIs, they had to pass a physical inspection.

The purebred requirement was relaxed after it was realized that there weren't enough of them to fill the order. Crosses were then allowed, but only if the traits of either parent were strong enough for positive identification as one of the breeds desired by the military. Eventually, the age requirement was adjusted to 14 months to three-and-a-half years, and males became the preferred sex, although spayed females were acceptable. Breeds and crosses were narrowed to approximately 30 breeds, which included Airedales, Boxers, Labrador Retrievers, German Shepherds, and St. Bernards. Of those breeds, five were selected for scout duty: German Shepherds, Belgian Shepherds, Collies, Dobermans, and Giant Schnauzers. Malamutes, Siberian Huskies, and Eskimos were the preferred sled-dog breeds, and St. Bernards and Newfoundlands were the preferred pack dogs. According to Fairfax Downey in his book History of Dogs for Defense, in 1946 the German Shepherd was named by the War Department as the official U.S. Army dog. 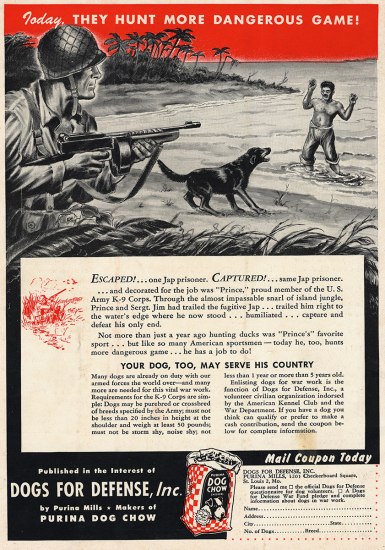 Dog donors were given an official certificate by the U.S. government as a way of thanking them for doing their patriotic duty. The dogs were then sent off for training, and eventually to the field of operation, where their particular skills would be put to use. If they couldn't pass training, they were sent back to their owners. But what about the dogs that didn't go to war because they were too small, too old, or too valuable an asset to the family to be donated to the cause? A breeder named James M. Austin came up with a brilliant idea to make money for the Dogs for Defense: why not enroll these dogs in a canine Home Guard? For $1, your dog would be enlisted as a private or a seaman, depending on which branch of service you selected; for $100, your dog could be a general or an admiral. The campaign was very successful; many dogs were enrolled, including President Franklin D. Roosevelt's Scottish Terrier, Fala. 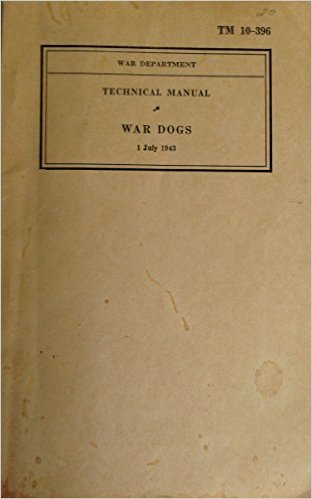 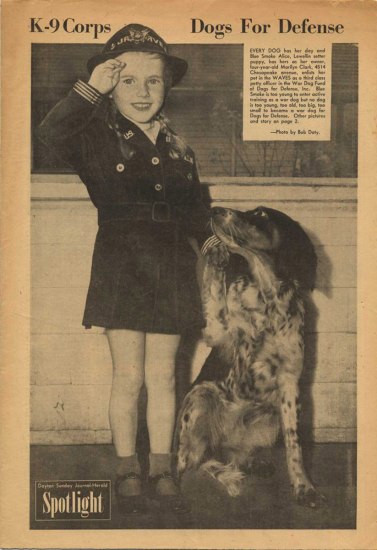 Dogs for Defense was a very successful program, recruiting approximately 20,000 dogs for the war effort. Monetary contributions had, by December 1944, reached such an amount that the program was able to meet its present and future needs. The most famous graduate of the Dogs for Defense program? A Husky/German Shepherd/Collie mix named Chips. Chips was best known for attacking a nest of Italian gunners, which forced the soldiers to surrender. He was also known as the dog that bit General Dwight D. Eisenhower. Chips survived the war and came home to his family in Pleasantville, New York. 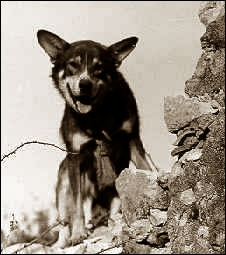 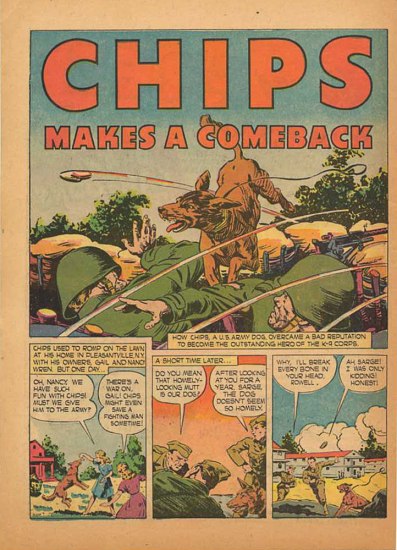 After the war, efforts were made to return the donated dogs to their owners. In general, the dogs were made available for adoption, with servicemen and families whose pets had been killed in action having first dibs. Dogs were put through a rehabilitation program in order to ease their transition back into civilian life. The rehabilitation program was very successful; only a small percentage of dogs could not reassimilate into civilian life (they were too aggressive or suffered too greatly from PTSD) and had to be euthanized. 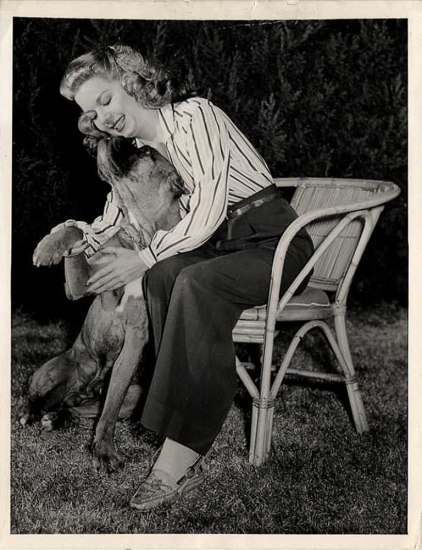 Today, all branches of the armed forces employ military working dogs (MWDs). They are used in a variety of capacities, from IED (improvised explosive device) and narcotic detection to rehabilitation of wounded soldiers. It is highly unlikely that civilians will ever again be asked to donate something as precious as their dog to the war effort, but if the call went out today, would you consider it your patriotic duty to do so?

Kathleen Golden is an Associate Curator (and dog enthusiast) in the Division of Armed Forces History. 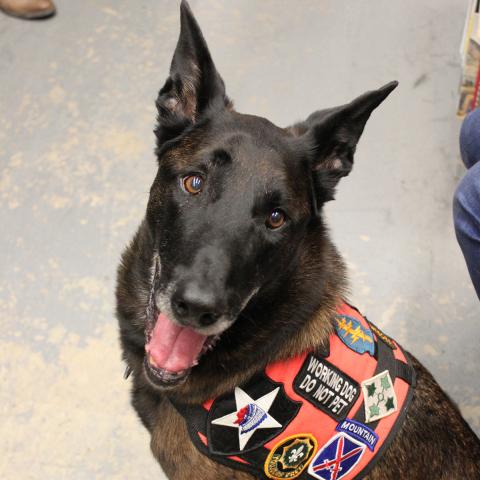