What does a world-famous musician put under the tree for the woman he loves . . . when he happens to be married to someone else?

In the case of the greatest bandleader of all time, the perfect gift was a Bible.

On December 25, 1963, Duke Ellington gave this pocket-sized edition of the New Testament to Beatrice Ellis, also known as Evie Ellington. The composer was married to his high school sweetheart, Edna Thompson Ellington, for nearly half a century, but for much of that time he lived with Ellis, who also used his name and was sometimes called his "First Lady." 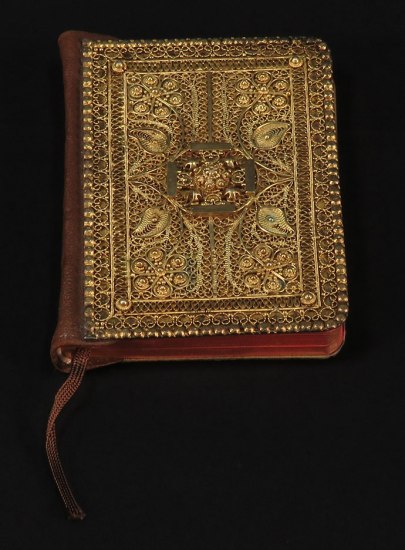 The small gold-covered volume he gave her that Christmas now provides an intimate view not only of their complicated relationship, but of the place of faith in the history of a once-denigrated music that became a national treasure.

Frequently on tour with his orchestra, Duke was known to shower Evie with gifts upon his return. 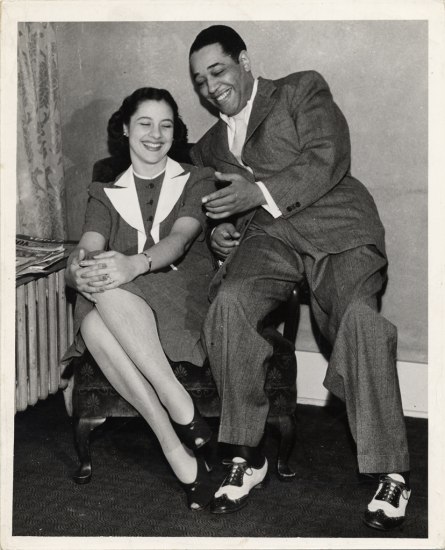 The inscription he included just inside this gift's ornate cover—"To my beautiful Evie, may God bless you, and keep you well."—may sound a bit remote for a decades-long romance, but his choice of a sacred text as a keepsake was far from impersonal. Indeed, it may have been an expression of the notoriously elusive artist’s most private concerns.

According to biographer Harvey Cohen, Ellington's religiosity was "unconventional in that he adhered to no denomination and did not live a 'moral' life according to usual religious dictates," but he was deeply devoted to his own version of faith, which more than anything valued freedom in all its forms: personal, political, social, and moral. He found in the Bible stories that spoke to this sensibility, and claimed to have read it cover to cover more than 20 times. 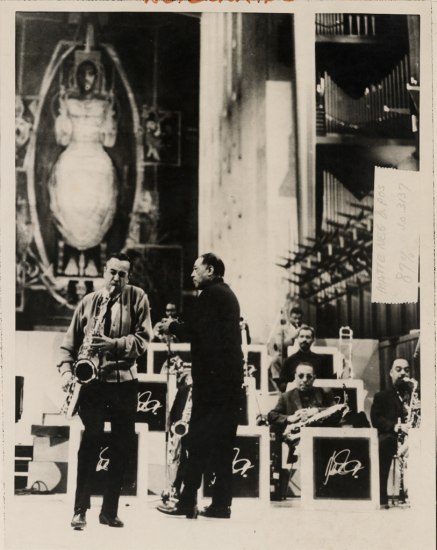 It's likely the lessons gleaned from that reading were particularly on his mind in December 1963. When he presented his "beautiful Evie" with the golden volume, he was in the early stages of planning a series of scripturally inspired performances he came to call the Sacred Concerts, presented in churches in San Francisco, New York, and London from 1965 to 1973, beginning when he was 66 years old.

While today the spiritual dimension of jazz is well known (see for example recent works like Wynton Marsalis's Abyssinian Mass, and classics including John Coltrane's A Love Supreme), at the time Ellington started work on his Sacred Concerts the notion that jazz should be played in houses of worship struck many as incongruous at best, and at worst profane.

From the earliest moment of broad awareness of jazz, a vocal contingent of journalists, cultural commentators, and music industry insiders argued that jazz was not merely a new secular art form, but a force actively working against traditional religion and morality. During the period we now call the Jazz Age, those who found its rhythms jarring often described it as unholy. As Frank Morton, chairman of the music industries committee of the Music Trades Convention, warned in 1921, "Jazz is an evil spirit," which "expresses hysteria and incites to idleness, revelry, dissipation, destruction, discord, and chaos."

To be sure, many such critiques had racial overtones. In the complaint about jazz he delivered at a Chicago meeting of recording professionals, Morton insisted that the music had its origins among "half savage voodooists."

Led by such misinformation as it became widely disseminated in the press, religious leaders of all races and denominations declared jazz a threat. Across the country throughout the 1920s, sermons were regularly given thundering against the rise of "jazz religion." A Pennsylvania preacher named Rev. T. J. Allen sounded an alarm that the influence of jazz on churchgoers was creating a kind of "religious hooliganism." Rev. Edward Waller of Harlem's Abyssinian Baptist Church (for which Wynton Marsalis would compose his jazz mass almost a century later) declared it "music from the devil's workshop," even as his son Fats Waller became one of the leading stride pianists of his day. In Fall River, Massachusetts, Catholic priest James Quinn pronounced jazz "satanic and diabolical," and persuaded local police to ban an orchestra from returning to town. One prominent minister in New York, Rev. Tertius Van Dyke, resigned his pulpit because, he said, the city "demands religion with a jazz tempo," while elsewhere in Manhattan, Rabbi Stephen Wise hoped to keep young people away from jazz dancing by denouncing it as "a species of sex gymnastics," though perhaps not with the desired result.

Yet the fascinating thing about such religious consternation concerning jazz is that historians now generally agree that the music was indeed born from religious experiences—specifically from the blending of spiritual and cultural influences within the African American community. The combination of beliefs and practices that eventually led to jazz included rituals drawing on traditions enslaved peoples carried with them from West Africa and through the Caribbean, including Yoruba, Obeah, and Islam.

In the 19th century, these beliefs and practices entwined with the rapidly evolving forms of Protestant revivalism that were then America's dominant religion. As jazz historian Ted Gioia has noted, folk-music collector Alan Lomax once described the use of Christian hymns by performers reared on the rhythms of other traditions: "Instead of performing in an individualized sort of unison [as hymns were sung in church] . . . they blended their voices in great unified streams of tone . . . from a group in which all singers can improvise together, each one contributing something personal to an ongoing collective effect." The outcome, Lomax said, was music that was "as powerful and original as jazz."

This transformative blending of spiritual and musical styles is what early critics of jazz heard when they mistakenly declared it was the devil's music. In fact it was never a music lacking religion. From the beginning, it was the product of varied religious perspectives interacting in entirely new ways.

The ability of jazz to incorporate any influence that comes its way has continued, and now includes every religious tradition that has called America home. When Ellington gave the gold-covered sacred book to the woman who had long been his muse, it was more than just a token of affection; it was an indication of the complexity of influences he felt in his own life and music, and his desire late in life to make them known.

"This music," he said of the Sacred Concerts, "is the most important thing I've ever done or am ever likely to do. . . . Now I can say out loud to all the world what I've been saying to myself for years on my knees."

One Christmas just before he put his first sacred notes on paper, he also expressed his devotion through a small gift that was part of a larger history.

Peter Manseau is the Lilly Endowment Curator of American Religious History in the Division of Home and Community Life. Don't miss a note—sign up for our Smithsonian Jazz newsletter.

Posted in From the Collections, Religion in America, Jazz Appreciation, African American History 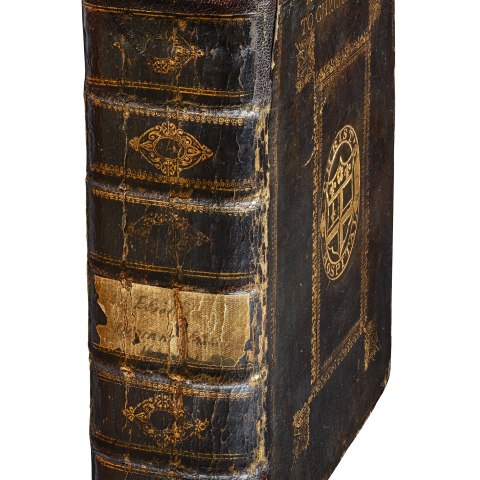