Ellipsographs: Do-nothing machines that do so much!

By Dr. Amy Shell-Gellasch, Volunteer in the Division of Medicine and Science, February 3, 2015

As a child, you may have played with a simple wooden toy called a "do-nothing" machine or simply a "grinder." 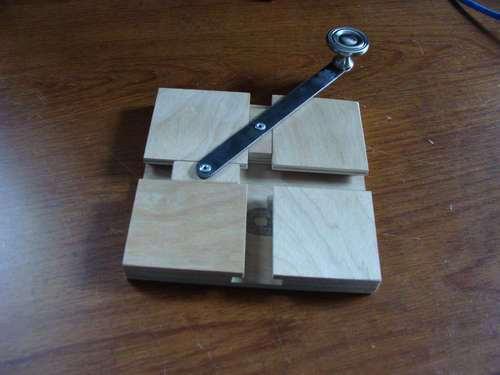 As a mathematician, I find that name a very poor choice. I mean, how sad? Why give a child a toy that by its name has no intrinsic value? Why not call it the "what does this do?" machine and let them explore it until it has some meaning? To me, it is an elliptic trammel, often referred to as the Trammel of Archimedes after the ancient Greek mathematician Archimedes of Syracuse (c. 287 BC – c. 212 BC).

Archimedes is my personal math hero. He gave us, among other amazing things, the Archimedes screw, still used in many developing countries to raise water; the theory of density, where he famously—though maybe not actually—cried "Eureka!" when he discovered while soaking in the bath that King Hieron II's crown was not made of pure gold; and the legendary burning mirrorsand other defensive works that kept the Romans out of Syracuse for three years during the Second Punic War.

Now I want to take you from your halcyon days of childhood toys to the more capricious days of ninth- or tenth-grade Algebra II class. Envision yourself drawing conic sections. You remember those, the four curves that arise when you cut a cone with a plane. The conics are the circle, the ellipse, the parabola, and the hyperbola. Archimedes explored these geometric objects at length and was the first to give us some idea of their uses. You may even recall that a circle is a special case of an ellipse where the two foci become one (see image below of an ellipse and all its relevant measurements).

So what exactly is an ellipse? Apart from its mathematical equation, which you can look up if that vital piece of knowledge escapes you, it can be defined very simply as the set of all points whose combined distance from two points (the foci, F1 and F2 above) remains constant. The easiest way to do this is to draw one (please try this at home—you will feel a great sense of accomplishment) using a piece of string, two pushpins and a pencil. Notice in my creation below that the total length of string does not change, so the distance from the two pins (foci) to the pencil is always the same (r1+r2 in the diagram above). You can draw a perfect circle simply by using a single pin.

Even though I had known theoretically how to draw an ellipse since I first learned about conic sections, I had never actually done it! I was surprised that it worked so well right out of the box. Don’t you think it looks good? 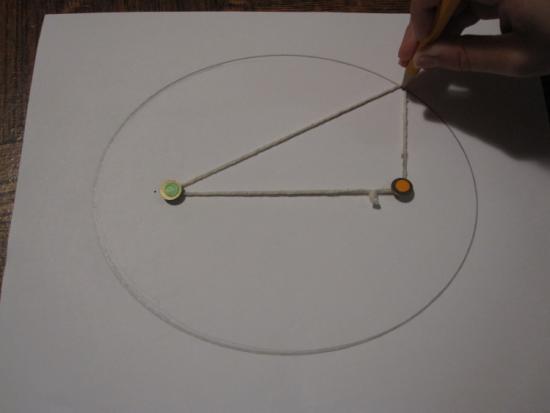 But why have I linked these two items, the "do-nothing" machine and the ellipse? The answer is in the mathematical name for the machine: the elliptic trammel. That's right! The trammel is a device for drawing ellipses! You can go to YouTube and type in any of the names above and you will find videos and animations of this wonderful little device in action (this one is fun), and even directions for making your own if you are handy.

Trammels are deceptively simple machines that produce something profoundly mathematical. There are also much more intricate devices that will draw ellipses and they all fall under the title of ellipsographs. The museum has eight ellipsographs in its mathematics collections. Here is a simple trammel dating from the late 19th century and probably used in the classroom. (Chalk would be placed in the holder on the left end of the cross-beam.) 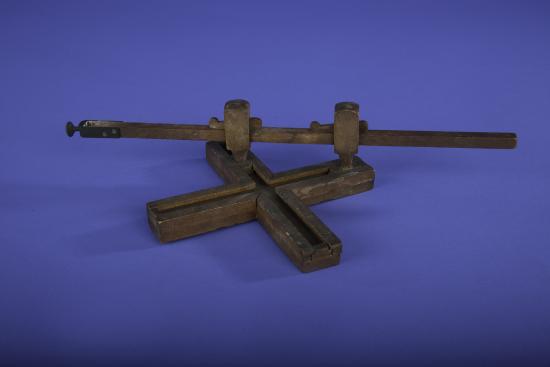 While this next one is an elaborate device, it is based on the same theory (but draws much more precise ellipses). 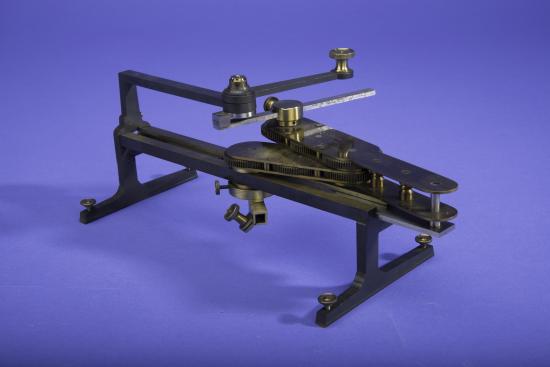 That is your cue to say "that is cool and all, but why would you invent a device, simple or complicated, to draw accurate ellipses?" I am so glad you asked! As you may recall from physics class, all the conic sections have applications to motion. Galileo showed us that any projectile traveling under the force of gravity follows a parabolic path. German astronomer Johannes Kepler discovered that all planets follow elliptical orbits. Now we know that the paths of all celestial objects can be described by one of the four conic sections. But these devices were not created for physicists or astronomers. They were developed for engineers, architects, and surveyors to produce technical drawing and blueprints (as well as for classroom use).

Ellipses appear in technical drawing in two ways. First, any circular object when viewed from an angle will appear as an ellipse (exactly, not approximately). Fifteenth century German artist Albrecht Dürer, an early pioneer in perspective drawing, realized this and wrote about it. Second, many architectural elements from windows, to vaulted ceilings, to arches in bridges are elliptical. Even the ancient Romans constructed their arched aqueducts using ellipses. So there are a myriad of uses for the ellipse and thus a myriad of reasons to draw them precisely.

The ellipsographs housed at the museum are far from "do-nothing" machines. They are precisely engineered drawing devices used by practitioners from the late 19th to the mid-20th century to produce accurate and, to many eyes, beautiful technical drawings. So get out your string and start drawing some ellipses. Also check out images and descriptions of our beautiful ellipsographs.

Dr. Amy Shell-Gellasch of Montgomery College is a volunteer in the Division of Medicine and Science.