Fifty years ago, on April 11, President Lyndon B. Johnson signed a bill that was to end discrimination in most of the nation’s housing. Today, a half century later, fair housing advocates are still trying to make it work.

The year was 1968. Martin Luther King Jr. had been assassinated a week earlier. His death plunged the nation into moral crisis, and cities went up in flames. Once again, assassination demonstrated that violence could overturn the rule of law. President Lyndon B. Johnson—whose deep commitment to ending discrimination produced landmark civil rights measures in 1964 and 1965—desperately needed new legislation to restore faith in government.

As troops responding to the unrest still ringed the U.S. Capitol, the House of Representatives gave final congressional approval to a bill designed to end discrimination in 80 percent of the nation’s housing. Johnson wasted no time, signing the bill a day later. After the signing he handed out the pens he used to affix his signature, including one now on display in the Smithsonian’s National Museum of American History, on loan from the Lyndon Baines Johnson Presidential Library.

Johnson said that “fair housing for all—all human beings who live in this country—is now a part of the American way of life.” The law, expanded over the years, protects people from discrimination when they are renting, buying, or securing financing for any housing. The prohibitions specifically cover discrimination because of race, color, national origin, religion, sex, disability, and familial status.

But did Johnson’s pronouncement of “fair housing for all” come true? The evidence shows he was far too optimistic.

An exhibit case commemorating the 50th anniversary of the law says that continued housing discrimination and segregation is evidence of “unfinished business,” in the words of former Senator Walter Mondale, a cosponsor of the bill.

The display, in the museum’s Within These Walls exhibition, includes a 1957 photo of an African American woman, Daisy Myers, who moved with her husband into the all-white Philadelphia suburb of Levittown, Pennsylvania. Myers, pictured holding her young child, “endured rock-throwing crowds, blaring music, and telephone threats,” the caption explains. She died in 2011, but a fictionalized version of her story is told in the George Clooney-directed 2017 film Suburbicon.

“As a result, in today’s America, approximately half of all Black persons and 40 percent of all Latinos live in neighborhoods without a White presence,” reported the alliance, which describes itself as “a consortium of more than 220 private, nonprofit fair housing organizations, state and local civil rights agencies, and individuals.”

The alliance noted there were 28,181 reported complaints of housing discrimination in 2016, and fair housing organizations were responsible for addressing 70 percent of them.

Some cities also have stepped up with enforcement efforts. The city of Santa Monica, California, holds workshops for landlords to enforce its local ordinance, focusing on discrimination against families with children and people with disabilities. “Doing workshops for 11 years turned a lot of landlords into the choir,” Gary W. Rhoades, deputy city attorney, said in an interview.

Rhoades said that, since 2015, the city has settled about 20 fair housing claims out of court. Santa Monica filed five lawsuits under its own fair housing law during the same period, with two settled favorably for the city and tenants, while the other three cases are pending.

Finally, in 2015, things suddenly started looking up for advocates of stronger enforcement.

The Supreme Court, in a 5-4 decision, created space for challenges to lending rules, zoning laws, and other housing practices that have a harmful impact on minorities. The court’s decision allowed cases to proceed even if there was no proof of intentional discrimination.

Buoyed by the decision, the Obama administration weeks later issued a rule requiring local jurisdictions to scrutinize their housing patterns for racial discrimination, and publicly report the findings every three to five years. Communities would have to set goals for reducing segregation in housing and track the progress. The rule said non-compliance could result in loss of federal funds to localities, but the administration said it really wanted a spirit of collaboration.

But in January 2018, the Department of Housing and Urban Development filed a notice that it was suspending the requirement until 2020—but did not repeal it.

The agency contended in a statement that “many program participants struggled to meet the regulatory requirements of the . . . rule, such as developing goals that could be reasonably expected to result in meaningful actions. . .” The statement added that “program participants struggled to develop metrics and milestones that would measure their progress” and contended that HUD could use the extra time to provide the technical assistance to get the local plans accepted.

The fair housing law, formally the Civil Rights Act of 1968, was the third major civil rights bill signed by President Johnson. It was preceded by the 1964 Civil Rights Act, which demanded equality for those seeking a job, eating a meal in a restaurant, and seeking lodging in any state, as well as the Voting Rights Act of 1965, which affirmed the right of every citizen to vote.

But the 1968 law presented Johnson with a new challenge. While the first two laws were aimed primarily at the South, King had taken the crusade for fair housing to the North—specifically Chicago.

In 1966 King and his family rented an apartment on the city’s West Side. They and local activists were met with fierce opposition, and in one case an angry white mob met the activists with bricks, bottles, and rocks.

“I’ve been in many demonstrations all across the South, but I can say that I have never seen, even in Mississippi and Alabama, mobs as hostile and as hate-filled as I’m seeing in Chicago,” King said.

King was assassinated in Memphis on April 4, 1968. The Senate had already passed the housing bill, getting past a filibuster by a single vote. The assassination may have influenced the House’s timing, although supporters in the 250–171 vote argued the bill would have passed anyway.

Fifty years later, supporters of the law are using the anniversary to make sure Americans know their rights.

The Santa Monica City Attorney’s Office has distributed a minute-long fair housing video that brings to life the characters created by a local seventh-grade student, from John the wheelchair user, to John’s friends and family, and then finally his landlord.

On a larger scale, the National Fair Housing Alliance announced it will be celebrating the law’s anniversary throughout the year by “engaging communities in conversations and facilitating action.”

“The law is meaningless unless you’re able to enforce that law,” he said in 2003. “It starts at the top.” He said the president, the attorney general, the secretary of HUD, and elected leaders need to make “racially, ethnically, and economically integrated neighborhoods a reality, and we as citizens have an obligation to demand that change.”

The Museum thanks the National Association of Realtors for its sponsorship of Within These Walls, including the new case on the 50th anniversary of the Fair Housing Act.

Larry Margasak is a retired Washington journalist and a volunteer at the Smithsonian’s National Museum of American History. He has previously written about the origins of the New York City subway, a museum display on the influence of lobbying money in politics, and piano manufacturer William Steinway’s long-gone amusement park that is now covered with the runways of LaGuardia Airport. 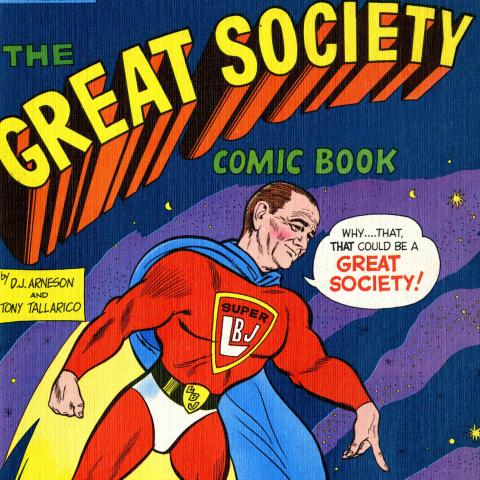