Let them eat dollars: Hyperinflation from revolutionary France to Zimbabwe

When my friend Trish got her first paycheck from her part-time job in high school, it was for $50,000. "It was enough to buy a pair of jeans," she explained to me. Trish went to high school in Zimbabwe from 2002 to 2007. During the mid-2000s, the Zimbabwean government printed large amounts of money, and inflation rates for the Zimbabwe dollar rose rapidly. As a result of this rising inflation, basic items, like Trish's jeans, cost thousands of dollars. 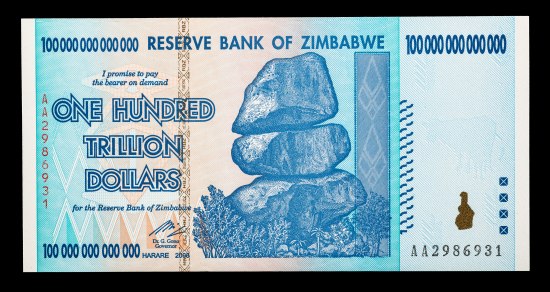 By the time Trish graduated, the economy of Zimbabwe had officially entered a "hyperinflationary era," a phenomena economists define as a period during which monthly inflation rates exceed 50%. Inflation was so out of control that in 2009 the Zimbabwe government issued a one hundred trillion dollar note, one of the largest denominations of currency in world history. The National Numismatic Collection recently acquired a Zimbabwean one hundred trillion dollar note, which is on display in the New Acquisitions section of The Value of Money. While this modern object from Africa may seem out of place in the National Museum of American History, this banknote helps to tell a global story of hyperinflation that is connected to objects in the National Numismatic Collection from around the world and dating back to the 18th century.

The first instance of hyperinflation occurred during the French Revolution. France declared war on the Habsburg monarchy of Austria on April 20, 1792—three years after the storming of Bastille prison, a key moment in the French Revolution. Funds were needed to support the war and repair the financial damage caused by nearly constant fighting with England. So the French National Assembly printed paper money, hoping that this measure would provide the public with greater access to money and thereby grow the economy. While this appeared to work at first, the large amount of currency entering the French market caused prices for goods to grow so quickly that soon the ink necessary to print notes cost more than the notes were worth.

It was no accident that hyperinflation first occurred in the 1790s. Something fundamental about the way in which European people thought about money changed after the French Revolution. The French government envisioned its currency, the Assignat, as a means by which people who had historically associated wealth with land ownership could conduct business, without needing to transfer land titles or move to newly acquired real estate in far regions of France. The movement away from older, and more material, manifestations of wealth only became more widespread as railroads, steamships, and telegraphs made it easier to stay in touch with business contacts around the world. While earlier generations of Europeans had been deeply suspicious of paper money, with most merchants refusing to accept it, in the 19th century paper currency became appealing. It was much easier to ship paper long distances than it was to send grain or gold to business partners operating far away.

The development of paper money is key to understanding the political and economic results of hyperinflation throughout history. Currencies that Europeans commonly used before the 18th century, including land, grain, and even coins, had value beyond their use as a medium of exchange, so they did not inflate in the same way as paper currency. Therefore the shift to paper money fundamentally changed people's relationship to their wealth. Arguably, today we are experiencing a similar shift in how we relate to our money. I can use my phone to deposit checks and to pay my friends back for movie tickets, without ever reaching for the cash in my wallet. As economists and consumers begin to debate the dangers and benefits of incorporating digital currencies, such as Bitcoin, into our financial lives, the history of money can offer insights into the relationship between innovations in financial technologies and changing forms of economic crisis.

Kate Steir is the education officer of the National Numismatic Collection and a PhD student at Georgetown University.