From iron lung to independence

By Gabby Chapman, graduate student in the public history program in the Department of History, University of Massachusetts Amherst, July 6, 2015 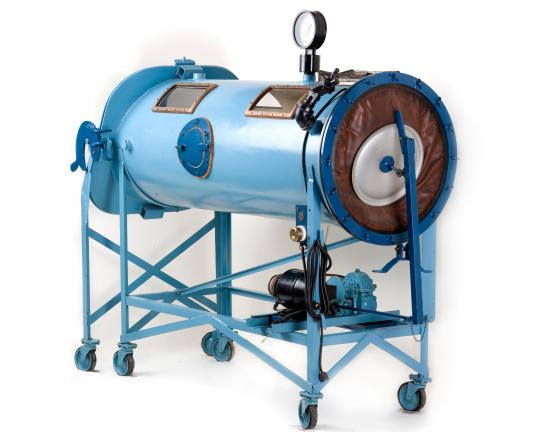 In September 1955 at the age of six, Mark O'Brien was roused from his sleep by a sharp pain in the pit of his stomach. His parents immediately phoned a doctor and rushed him to Boston Children's Hospital. His memory of that night remained fuzzy throughout his life, but in his memoir O'Brien recalls the distinct hospital smell and fluorescent lights as his family "wandered from room to room, nurse to nurse, and doctor to doctor" trying to get answers. He was unable to understand why there was so much fuss over a stomachache; a nurse eventually ushered him into a room full of beds where he laid down and slipped into a thirty-day coma. "When I finally woke up in the big, dimly lit room, I first saw my stuffed bear" then realized "I was lying in a strange machine, paralyzed from the neck down."

The "strange machine" O'Brien found himself in was a tank respirator, commonly referred to as an iron lung. Invented in 1927 by Philip Drinker and Louis Agassiz Shaw Jr., the iron lung became a staple within medical facilities after John Haven Emerson designed a more cost-effective device four years later. Iron lungs were used during the early stages of polio when the virus attacked the central nervous system, which in extreme cases led to the inability to control the muscles responsible for swallowing and breathing. After a few weeks, most patients recovered and were able to breathe independently, but some, like O'Brien, required the use of assistive respirators for the rest of their lives. 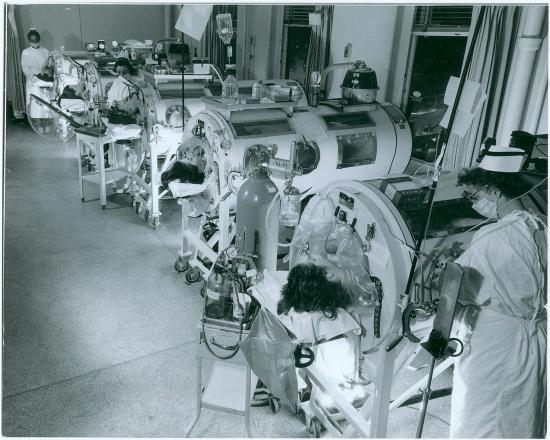 As O'Brien describes it, an iron lung was a "horizontal metal cylinder on legs, about three feet wide and perhaps eight long, weighing about 650 pounds." Inside the cylinder was a movable mattress that gave the iron lung the more endearing nickname of "the cookie tray." The head was the only part of the body visible, sticking out at one end with an adjustable collar fit around the neck to keep the device airtight. Tank respirators operated like a vacuum with a motor creating and releasing pressure around the body. Air would be pushed into the lungs as decreased pressure forced the chest up. The lungs exhaled when the vacuum released the pressure, pulling the air out. Iron lungs were one of many assistive devices used to help patients breathe, but none were as effective and reliable as the iron lung. 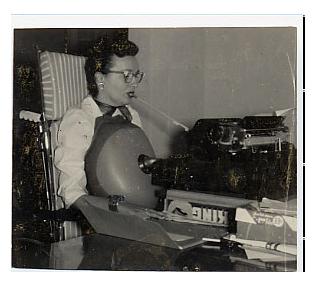 Despite being paralyzed, patients encased in the protective steel of the respirator became suddenly aware of their bodies. They were forced to relearn the most basic activities of life—breathing, eating, and talking. In his memoir, Larry Alexander, who contracted polio in his twenties and spent the rest of his life using an iron lung, remembers his realization that speaking can only be done when exhaling. "In the lung my exhalations were fixed and rigid. If I were in the middle of a sentence when my breath was finished, I had to wait till the next one came to continue." Eating and drinking also had to be timed to the rhythm of the machine to avoid choking. For those who permanently lost the ability to breathe, the iron lung became a part of their physical being. 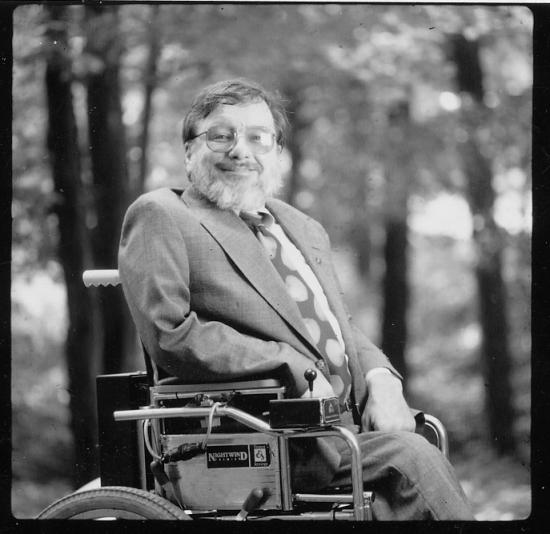 Learning to let a machine take over the functions of the body was often an isolating experience at first. It took time to feel independent while needing the assistance of a machine. When returning home, however, those hurt by polio felt a new form of seclusion. Discrimination and the built environment led many polio survivors, including O'Brien, to become advocates for disability rights. One of the distinctive features of the disability rights movement that emerged in the 1960s and 1970s was that it was led by people with disabilities. O'Brien remembers early reformers as "good people who thought of themselves as helping the helpless," but they took for granted the thoughts and desires of those they cared for. "They never asked us what we wanted." If they had, O'Brien would have said one word: "Freedom." 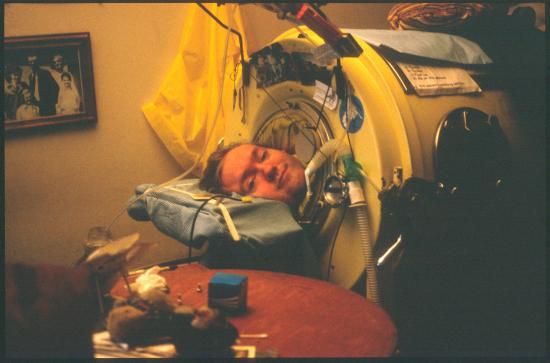 On July 4, 1999, Mark O'Brien passed away in Berkeley, California, at the age of 49, having obtained the freedom he desired. In 1978 he enrolled as an undergraduate at University of California, Berkeley, eventually graduating with a master's degree in the school's journalism program. While there, he cultivated a love for writing and poetry, which he used as an outlet for civil rights activism. His first published essay in CoEvolution Quarterly printed in the spring of 1982 "combine[d] the elements of autobiography with an argument for independent living." Rather than placing disabled people in nursing facilities, he fought for attendant programs that hire people to work in homes rather than hospitals. O'Brien realized how different his life would have been without this form of healthcare and worked to extend this advantage to all. He shared his life story with the hope of improving the rights and legal protection of the disabled community.