For John Lewis, activism for social change was a communal activity. He believed that people coming together to mentor, protest, and learn could create a society that they wanted to live in, what Dr. Martin Luther King Jr. and others called the “beloved community.”  Creating that community required persistence, optimism, and the willingness to make what he called "good trouble, necessary trouble."

Lewis was born in rural Alabama, and his family, teachers, and the Black church were his earliest mentors and protectors. They nourished his sense of self while he grew up in a nation that systematically denigrated and oppressed African Americans. In a 1979 interview, Lewis recalled listening to the experiences of his “father, and my uncle, and my grandfather, and great grandfathers” about their daily encounters with racial discrimination and white supremacy.  He was a teenager when Emmett Till was murdered in Mississippi, and recalled in his autobiography that he thought, “That could have been me, beaten, tortured, dead, at the bottom of a river.”

Lewis was inspired by Montgomery, Alabama’s African American community, which demanded an end to racial segregation on the city’s buses and boycotted the system for over a year. He told an interviewer that as a result of these experiences, he “grew up with a feeling that I had to find a way to oppose this system of segregation, racial discrimination.”

When he left home to attend the American Baptist Theological Seminary (now American Baptist College) in Nashville, Tennessee, Lewis planned to enter the ministry. He attempted to establish a branch of the NAACP at the school, but the seminary’s administration derailed this plan.

Looking for an avenue for his activism, Lewis submitted his application to transfer to the all-white Troy State University. He would be following the example of Autherine Lucy, who braved riotous crowds when she attempted to desegregate the University of Alabama in 1956. Lewis sought advice from Dr. King, starting a partnership that would last until King’s assassination. Lewis reluctantly withdrew his application to Troy State, out of concern that white supremacists would drive his family from their land–or worse.

On his return to Nashville, John Lewis began attending Reverend James Lawson’s workshops on the theories and practice of nonviolent resistance to injustice. The workshop attendees formed the core of the Nashville Student Movement.  Led by Diane Nash, activists including Lewis, James Bevel, Bernard Lafayette, Marion Berry, and the young minister Reverend C.T. Vivian became known for their commitment to nonviolence and courage. Their first campaign tested the city’s racially segregated lunch counters in 1959.  A few months later, in 1960, Lewis and others took part in a long campaign of sit-ins in downtown Nashville as part of a national wave of resistance sparked by activists who refused to leave a whites-only lunch counter in Greensboro, North Carolina.

In the midst of the protests, the experienced organizer Ella Baker held a meeting for college students, which resulted in the creation of the Student Nonviolent  Coordinating Committee (SNCC). For several years, SNCC would be John Lewis’s home, where he deepened his commitment to resistance and learned principles of community organizing.

In 1961, the Congress of Racial Equality (CORE) began Freedom Rides.  An interracial group of activists defied whites-only seats, restrooms, waiting rooms, and cafes in stations and on buses that travelled between states. SNCC activists John Lewis and Hank Thomas joined CORE’s protest. When CORE halted the protest in Birmingham, Alabama, after facing bombing and mob violence, the Freedom Rides continued under SNCC’s leadership. The racist violence intensified and in Montgomery, Alabama, a mob attack left John Lewis and James Zwerg battered and bloody. The Freedom Rides continued until Lewis and over 300 other Freedom Riders were arrested in Jackson, Mississippi. Lewis was among the people who were imprisoned in the state’s notorious Parchman prison.

The following year brought him to Cairo, Illinois, where he and other SNCC activists worked alongside courageous local activists who demanded that the swimming pool, restaurants, and other facilities open their doors to all city residents, regardless of race.

In 1963, Lewis was elected the chairman of SNCC. In this role he became the youngest member of the group planning the March on Washington for Jobs and Freedom. The original speech Lewis wrote for the march represented the views of SNCC, which was harshly critical of the Kennedy administration’s civil rights record. To accommodate the other march organizers, Lewis delivered a toned-down speech that reminded listeners, “We must get in this revolution and complete the revolution. In the Delta of Mississippi, in Southwest Georgia, in the Black Belt of Alabama, in Harlem, in Chicago, Detroit, Philadelphia and all over this nation the black masses are on a march for jobs and freedom.”

Differences and tensions within SNCC had long been brewing, and in 1966, the membership of SNCC voted John Lewis out as chair and replaced him with Stokely Carmichael, a young activist whose grassroots work in Lowndes County, Alabama had gained the confidence of many of SNCC’s rank-and-file members. Lewis turned to other forms of activism and connecting communities with resources. He settled in Atlanta, where he would live for the rest of his life, and married Lillian Miles, a librarian at Atlanta University. Together they would raise their son, John-Miles Lewis.

Lewis saw voting as an essential part of civic life. From 1970 to 1977, he served as executive director of the Voter Education Project, and used the platform to organize African American voters in the South to exercise their rights as citizens. In 1972, the National Museum of History and Technology (now the National Museum of American History) created The Right to Vote, an exhibit designed to mark the dramatic expansion of voting rights due to the civil rights movement and the constitutional amendment lowering the voting age to 18. Lewis spoke at the opening.

Lewis gradually made his way to electoral politics, which he believed could be an effective way to create a more equal nation. After an unsuccessful run for Congress, and serving on the Atlanta City Council, he was elected to the U.S. House of Representatives in 1986, where he held office until his death. He worked for his local constituents, but also addressed national and international issues, including challenging the United States’ support of South Africa’s apartheid government.  Lewis also expanded his idea of civil rights to include support for women’s rights and LGBTQ+ rights.

Throughout his life, Lewis was willing to share his experiences with young people, but also to learn from them. At events such as the National Museum of American History’s National Youth Summit and a symposium commemorating the 50th anniversary of the Greensboro lunch counter sit-ins, Lewis encouraged young people to be optimistic, build community, and fight injustice.

John Lewis’s last public appearance came in June 2020, near Lafayette Park in Washington, D.C., where the military had violently dispersed peaceful protesters mourning George Floyd’s murder. Lewis told Washington Post reporter Jonathan Capehart that, “It was so moving and so gratifying to see people from all over America and all over the world saying through their action, ‘I can do something. I can say something’.” Even in the final chapter of his life, he still committed to the ideals so closely associated with him: optimism, commitment to creating the beloved community, and the importance of getting in “good trouble, necessary trouble.”

Modupe Labode is a curator at the National Museum of American History.

Posted in Stories of Freedom & Justice, From the Collections, African American History 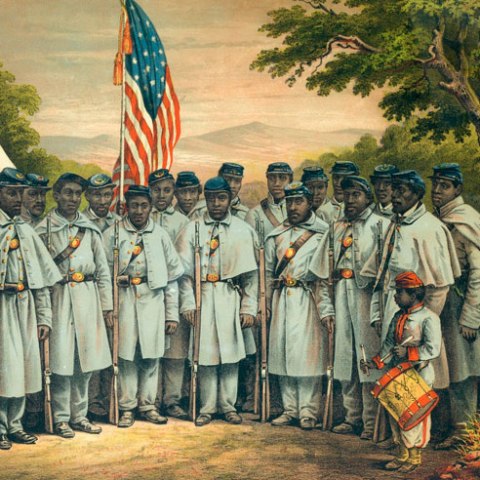 In 1868, Black suffrage was on the ballot
Every election season in the United States revolves around a set of issues—health care, foreign affairs, the economy. In 1868, at the...