Pennies and nickels add up to success: Maggie Lena Walker

Maggie Lena Walker was one of the most important Black businesswomen in the nation, and today too few people have heard of her.

Maggie Lena Walker was the first Black woman in the nation to organize and run a bank. And she did it in the segregated South in the former capital of the Confederacy, Richmond, Virginia. But that’s not all: Walker ran the Independent Order of Saint Luke, one of the largest African American fraternal benefit societies; she bought a building and opened a department store; and she financed and edited a newspaper, The Saint Luke Herald. Walker’s work wasn’t for her individual benefit, however; it was for the benefit of her community.

“I was not born with a silver spoon in my mouth, but with a laundry basket practically on my head,” Walker was known to comment. She meant this literally. Maggie Lena Walker was born on July 15, 1864, to Elizabeth “Lizzie” Draper, a formerly enslaved woman, and Eccles Cuthbert, an Irish-born Confederate soldier and nurse. Draper and Cuthbert were never in a long-term relationship. After the abolition of slavery, Draper cared for her family by working as a laundress. In 1868 Draper married William Mitchell, but he died prematurely in 1876 in an unsolved murder. After the death of her husband, Lizzie Mitchell raised her children, Maggie and a son, John B., on her own. While her labor as a laundry worker meant autonomy because the work could be done at one’s own home and at one’s own pace, it was far from lucrative. Lizzie Mitchell often enlisted the help of her young daughter. Walker’s humble upbringing motivated her to help others.

As a teenager, Walker joined the Independent Order of Saint Luke (IOSL), an organization she would be heavily involved in for the rest of her life. IOSL was an African American fraternal benefit society, which had been founded by Mary Prout in Baltimore in 1867. Like the many other fraternal organizations that proliferated during this time, the IOSL was established to provide aid to its members, especially when sick or upon death. Societies like the IOSL also had a ritualistic element and made community service a high priority.

Walker graduated from Richmond Colored Normal School in 1883 and began working as a teacher. However, when she married Armstead Walker in 1886, Walker was forced to resign her teaching position because married women were prohibited from teaching. Since she could no longer teach, Walker thrust herself into her community work and began climbing the ranks of the IOSL.

In 1899, the order elected her Right Worthy Grand Secretary, the highest leadership position within the national organization. While this was a tremendous accomplishment, Walker assumed the leadership of an organization on the verge of bankruptcy and with a rapidly diminishing membership. Seeing opportunity where others might have seen catastrophe, Walker seized this chance to rebuild the IOSL.

And rebuild she did. Under Walker’s leadership, the IOSL grew in membership, mission, and purpose. In 1899 when Walker became the national leader, the organization had 1,080 members. By 1915 the order had grown to 40,000 and by the mid-1920s, to over 100,000, with lodges in Virginia, West Virginia, Maryland, and Massachusetts.

Walker had a vision to better her community by increasing access to employment, education, and financial instruments such as mortgages and personal loans—all areas where segregation prevented Black people from accessing mainstream options. Through the IOSL, she founded St. Luke Penny Savings Bank, The Saint Luke Herald, and a department store, St. Luke Emporium. The focus of these entrepreneurial endeavors was not individual success, but rather community advancement. To run these businesses, Walker employed a workforce made up primarily of Black women in areas that provided higher wages than physically laborious, menial household work. Under Walker, Black women worked as stenographers, accountants, journalists, and secretaries.

Walker’s former secretary Alice Spindle McSweeney Gilliam remembered Walker “was strict about time. You had better be at your desk at ten minutes to nine.” As the IOSL and the bank prospered, the workload increased. Employees worked long hours. One employee told the story of a time when the audit came due. At the conclusion of the audit, one nickel was found to be missing. Walker instructed two of her workers to stay until the nickel had been found. After hours of searching, they finally found it—at midnight. In addition to long hours, Walker required that workers adhere to a dress code, a white blouse and a long dark skirt, and encouraged them to save 5 percent of their wages. Not all workers appreciated these impositions or the heavy workload and a few submitted complaints to Walker, which she seems to have handled individually.

In time their hard work paid off. The Washington Bee, an African American newspaper, recognized that the financial success of the IOSL and the bank had a tremendous impact on African Americans in Richmond and beyond. (It even encouraged its readers to join the order or open an account.) The combined nickels and pennies that ordinary Black workers deposited at the bank amounted to a lot—half a million dollars by the mid-1920s. For comparison, in 2019, that would be a little over $7 million.

In addition to her entrepreneurial pursuits to increase economic access, she gave her time and money philanthropically to support organizations that sought to better the lives of African Americans, particularly African American women. She helped organize the Richmond Urban League and donated money to countless organizations and causes, including Nannie Helen Burroughs’s National Training School for Women and Girls. Walker believed that everyone had the capacity to give, stating “there are few of us who can give much; but there are thousands upon thousands who can give little, and the combining of the mites will produce the much, so necessary to success.” Indeed, it was the principle of each person contributing a little that led to the success of St. Luke Bank and, later, Consolidated Bank and Trust, which operated independently until 2005.

Crystal M Moten is curator of African American history in the Division of Work and History. A south side of Chicago native, she has taught at small liberal arts colleges on the east coast and in the upper Midwest. Her research interests include the intersectional connections between African American labor, business, and civil rights history with emphasis on post-world war II Black freedom movements in the urban Midwest. 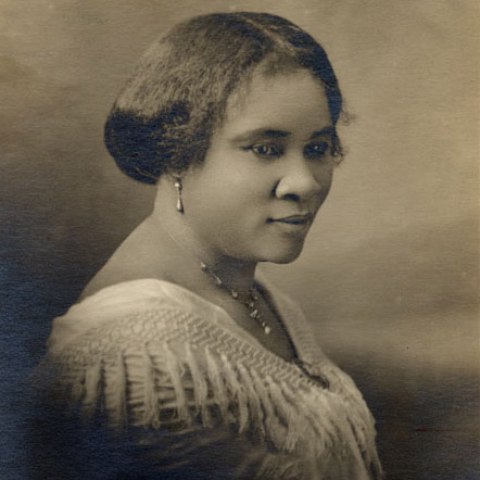