As a kid and as a parent, I am all too familiar with the concept of hand-me-down clothes, the cost-cutting practice of wearing already "broken-in," often dated clothes that an older sibling has outgrown. Nowadays, hipster boutiques get away with calling some of these items "vintage." Hollywood studios have long employed this method of recycling costumes. Among the museum's extensive collection on the television show M*A*S*H, which chronicled a team of doctors and nurses who staffed a mobile army surgical hospital during the Korean War (1950–1953), we have two incredible hand-me-downs worn by actor Jamie Farr.

Farr played Corporal Maxwell Q. Klinger, an Arab American orderly from Toledo, Ohio, who was desperate to get out of the army. Klinger hit upon the idea of dressing in women's clothes to prove that he was mentally unfit, a sure ticket back to the U.S., he thought. The show depicted Klinger's cross-dressing as a subversive act and mined it for comedy with outrageous costumes and Klinger's inept portrayal of gender role reversal.

To help mark the 45th anniversary of M*A*S*H's debut, I reached out to Jamie Farr, now 83, who graciously spoke by phone with me from his California home about his experiences as part of the cast.

According to Farr, M*A*S*H creator Larry Gelbart based the character on comedian Lenny Bruce, who was discharged from the navy at the end of World War II for, among other things, wearing a woman's WAVE (Women Accepted for Volunteer Emergency Service) uniform.

The series popularized the use of the term "Section 8," which referred to a World War II-era army regulation providing for the discharge of personnel deemed mentally unfit to serve. In the mid-20th century, psychologists regularly diagnosed homosexual individuals with mental disorders, and evidence of non-normative gender identity or sexuality could lead to a discharge from military service.

Farr explained that he didn't need to audition for the part. He had played a small role in F Troop, a slapstick sitcom about a remote army outpost at the end of the Civil War, for director Gene Reynolds. When Reynolds became the producer for M*A*S*H and read the script with the Klinger character, he reportedly said, "there is only one guy who can play this and get away with it, and it's Jamie Farr."

The chance to work on the show came at a critical time for Farr.

"I was really down on my luck. I hadn't been working, so when they called me, they didn't even tell me what the part was, they just said you got a part, and it pays $250 for the day," Farr said. "So, I said to my agent, boy I'll be there."

Farr described going down to the studio and being ushered into a trailer where a woman's WAC (Women's Army Corps) uniform was hanging. He thought that he was sharing a dressing room with an actress, but then Gene told him that was his costume.

"So I said, 'what the heck kind of part is this?' But I put the thing on, and he started laughing because of my hairy, bowed legs and everything, then he took me on this stage, and everybody had a good time laughing."

Farr only had five or six lines in that early episode, but he made an impression on the producers and the audience.

"It made such an impact that they called me back, and I think I did six more of those first-year shows, and that's how I got connected with the series." Originally conceived as a bit part, Klinger appeared in 12 episodes in the second season and became a regular member of the cast by the third season.

"The show was shot in color, but everything, the jeeps, the tents, the uniforms, were olive drab, so I think Klinger's outfits were the only things that brought color to the show," he said. "The cheesier and more outlandish the outfit, the better it was."

The outfits that Klinger wore were culled from the 20th Century Fox wardrobe department, and many had been used in earlier productions. Handwritten on the labels of the museum's two Klinger dresses are the names of famous actresses who wore them first.

In a Season 7 episode called "Major Ego," which first aired on November 6, 1978, Klinger sports a pink beaded wool coat originally worn by Betty Grable. This show centers on a reporter from the military newspaper Stars and Stripes, who arrives to write a feature on Major Charles Winchester, who has performed one of the first successful open-heart surgeries. But when his heart patient has complications, Winchester refuses to let the story run. Meanwhile, Klinger has been lobbying the reporter to do a photoshoot of him dressed as female stars of the silver screen. After traipsing through the camp as Scarlett O'Hara from Gone with the Wind, Dorothy from The Wizard of Oz, and Bette Davis's Rosa Moline from Beyond the Forest, Klinger gets his fashion spread—but no discharge.

The museum also has an elaborate Cleopatra dress and headdress from the M*A*S*H Season 8 episode called "April Fools," which aired March 24, 1980. The gold lamé, floor-length gown was originally worn by Ginger Rogers, but was altered significantly so Klinger could dress as the queen of the Nile. In this show, Klinger uses reverse psychology to try to get discharged when an uptight, by-the-book colonel visits the camp on April Fool's Day and threatens to court martial the entire medical staff for insubordination. Klinger wears his male uniform and pretends to be a spit-and-polish, straight-laced soldier as he escorts the visiting colonel on his inspection. At the end of the episode, Klinger appears in full Cleopatra regalia without acknowledging that he's not in uniform to prove that he has "cracked under pressure." As usual, it doesn't work, because the visiting colonel is pulling his own April Fool's joke with his tough treatment of the medical staff, and he's been warned not to fall for Klinger's shenanigans.

In 1979 Farr wore another Ginger Rogers dress, not owned by the museum, that the actress recognized from years before. Miss Rogers was at the studio filming a Love Boat episode (Season 3, Episode 10), and they ran into each other in the 20th Century Fox canteen while breaking for lunch.

According to Farr, she got quite a kick out of it, telling him, "I saw the show where you wore my outfit and, I have to tell ya, it looked a helluva lot better on you than it did on me."

Farr said that his character phased out dress-wearing during the eighth season of M*A*S*H after actor Gary Burghoff, who played Radar O'Reilly, left the show and Klinger took over as company clerk.

"I took that one joke and parlayed it as best I could, and the producers figured we'll move into another area," Farr said. "So that is the reason why they decided to get me out of those outfits."

The museum also has loads of Toledo Mud Hens paraphernalia, including a jersey, pennant, and hat, that Klinger wore as an ardent fan of his hometown minor league baseball team in the Detroit Tigers system. Like his character, Jamie Farr also hails from Toledo and is a proud supporter of the Buckeye state. Over the years, the Mud Hens have honored their native son with four bobble heads, including two brandishing a local version of the iconic M*A*S*H signpost with arrows pointing out destinations within the ball park. At a special ceremony this past August, the team also inducted Farr into their Celebrity Hall of Fame, where they retired one of the two Mud Hens jerseys that he had worn during the filming of M*A*S*H. The museum has the other one.

The M*A*S*H series lasted 11 seasons, nearly four times the length of the actual Korean War. The first sitcom to use a dark comedy format, the show addressed national concerns including disagreement over the Vietnam War, a loss of faith in government following the Watergate scandal, and the rise of the women's and minority rights movements. The central theme of the show was to affirm the worth of the individual within a world battered by arbitrary authority, needless pain, and senseless death.

M*A*S*H lives on in lucrative syndication, and Farr says he still watches it frequently and never gets tired of seeing the same episode.

"I am astounded at the impact that television makes on people and what it does to their lives," Farr said. "When you are filming these things, you are almost in a factory, and you're doing this and you don't realize that you're reaching millions of people all over the world."

Lucy Harvey is a Program Assistant in the Division of Armed Forces History who also volunteers with the Division of Culture and the Arts. She has also blogged about the popular M*A*S*H exhibition that once existed at this museum. 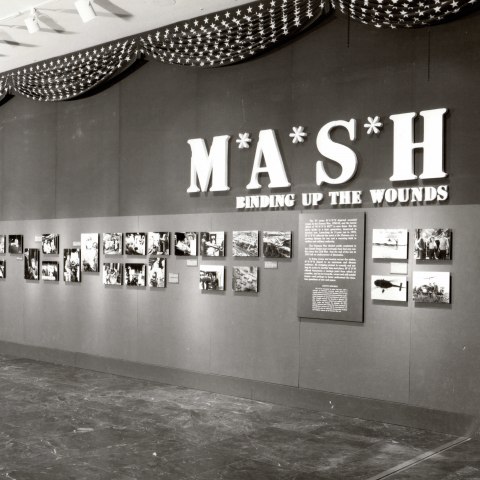 Looking back on "M*A*S*H," the show and the exhibition
As frightening reports of North Korea's nuclear missile tests fill the news, many of us long for the days when the only television coverage...