The "M*A*S*H" scripts: A collection of laughter and tears

Watching the television show M*A*S*H is a family tradition in my house. My grandfather introduced the show to my mother and uncle, and they introduced it to me. It reminded my grandfather of the time when he served as a Marine during the Korean War, repairing and building the same helicopters you see in the show's opening sequence. The entire family shared his love of the show, and eventually I fell for it too, watching how the show balanced knee-slapping laughter with the brutal reality of war in episode after episode. 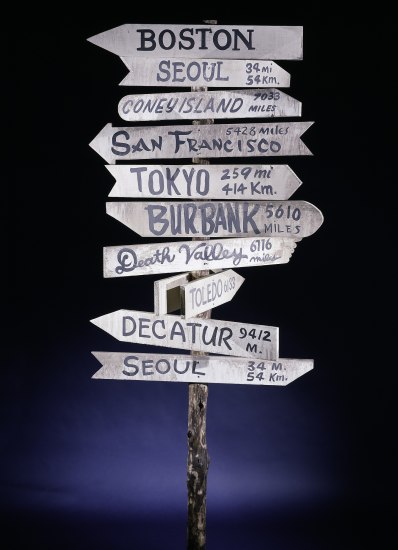 As an intern in the museum's Archives Center, I was thrilled to get an insight into the behind-the-scenes making of the sitcom, which ran from September 17, 1972, to February 28, 1983. M*A*S*H told the story of the fictitious 4077th Mobile Army Surgical Hospital (MASH) during the Korean War. It won numerous awards, from the Writers and Directors Guild Awards to the Emmys. The show centers on the characters "Hawkeye" Pierce, "Trapper" John McIntyre, B. J. Hunnicutt, Frank Burns, Charles Winchester III, Margaret "Hot Lips" Houlihan, "Radar" O'Reilly, Max Klinger, Father Mulcahy, Henry Blake, and Sherman Potter.

Hawkeye, Trapper, and B.J. are the main practical jokers of the show. They put eggs in Frank Burns's helmet, made dry gin in their quarters (called "The Swamp"), and switched Charles Winchester's clothes to make him think he was simultaneously losing and gaining weight. Klinger's bid to get out of the Army by dressing up in women's clothing not only displayed the best in women's fashion, but also showed how far some men were willing to go to get out of the Army. Hawkeye gave one of the most famous monologues written for the show, which delivered an antiwar message embedded in a comedic moment, telling Frank he will not carry a gun in the episode "Officer of the Day." As part of my work in the Archives Center, I was privileged to have the opportunity to study that page. 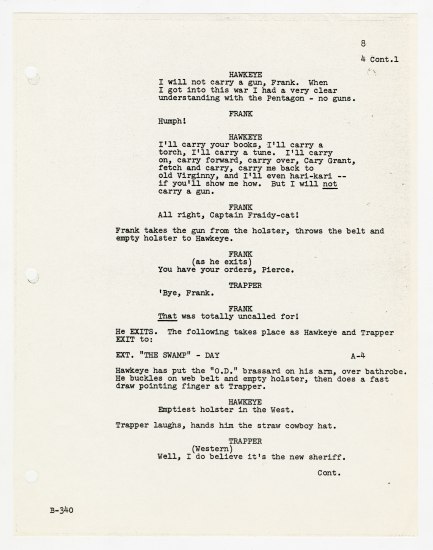 It was not all laughter at the 4077th, however. The show presented the many emotional experiences of the doctors, nurses, and soldiers who fought in the war. Helicopters roared into the compound carrying wounded soldiers while ambulances and buses brought scores more. The Operating Room (OR) consistently reappeared to display the dedication of doctors and nurses in trying to save every patient they could. Weary and stained in blood, doctors Hawkeye, Trapper, B.J., Colonels Blake and later Potter, Frank Burns, and Charles Winchester would emerge from the OR only to triage more soldiers for surgery.

Perhaps the most emotional episode was "Abyssinia, Henry," when the commander of the 4077th, Henry Blake, leaves to come home. At the end of the episode, Radar appears in the OR with news that Henry's plane was shot down. Many viewers were shocked. A fan of the show from Cranbury, New Jersey, wrote to the show, ". . . when Radar entered the Operation room with the news of Henry's death I almost cried. That was the most tasteless, totally unnecessary thing I have ever witnessed on T.V." The show received tons of fan letters reporting astonishment and anguish that the show chose to let one of its main characters die. Some of these letters were kept and are found in the collection of the museum's Archives Center, where they're available for researchers.

The show's writers conducted extensive research to strike the right balance of brutal realism and sometimes absurd humor, completing interviews with over 72 doctors, nurses, and soldiers who were in the Korean War. In one interview, a post-operative nurse reflected on the occasional dullness of war: "Sometimes we'd get lulls where we didn't do anything which was nerve-wracking. It was a strange place—you couldn't exactly wish to be busy—but doing nothing drove you crazy." 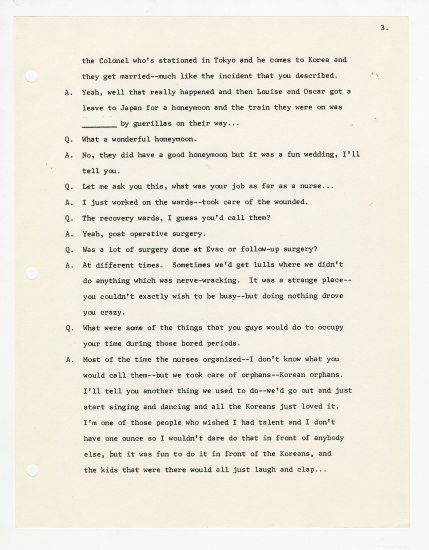 Interviews like the one served as inspiration and background for many of the episodes. Along with interviews, the collection contains materials used by the writers to get a better sense of the Korean War, and war as a whole, including the history of the 43rd Surgical Hospital, research notes on Korean customs and history, and even the book Back Down the Ridge by W. L. White.

It was enormously satisfying to see the real scripts of the show and the collection as a whole. From my grandfather's time to my own, M*A*S*H brings many people to laughter and tears.

The collection is located offsite at one of the museum's storage facilities, but it is open for research. To get a better idea about what the collection has, please check out the finding aid. If you would like to research the collection yourself, please email the Archives Center at archivescenter@si.edu or give us a call at (202) 633-3270 to schedule an appointment.

Corey Schmidt completed a summer internship in the Archives Center. He is a recent graduate of Truman State University and is a history major.