Outbreak! On the front lines of a measles epidemic

In 1904 C. A. Lindsley, the secretary of the Connecticut State Board of Health, complained that "measles is still prevailing in an epidemic form in too many towns in the state." Measles epidemics could, Lindsley insisted, be arrested if quarantines were simply enforced across the state. Unfortunately, "a remarkable and strange misunderstanding" of the state's quarantine regulations had led many health officers to mandate that only the primary or first case of measles in a community be quarantined. As a result, epidemics were spiraling out of control across the state. 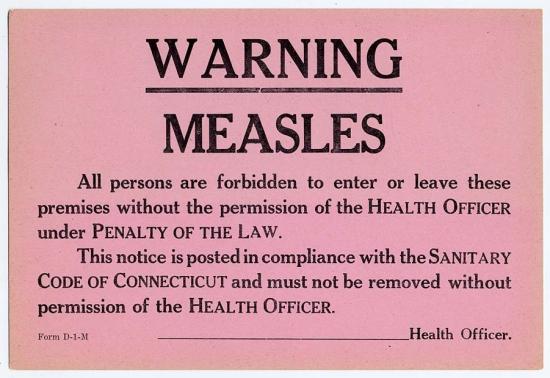 In advocating the use of a strict quarantine, Lindsley was not proposing anything new. For centuries, quarantines have been used to contain a variety of contagious diseases. In fact, the term quarantine dates back to the 14th and 15th centuries when city leaders in Venice imposed a forty-day ("quaranta giorni:") isolation period on ships entering the city's port. By the late 19th century, the imposition of quarantines was still regarded as one of the most effective methods of arresting epidemics of scarlet fever, whooping cough, and a range of other illnesses. But in calling for stricter and more widespread quarantines for a disease that many Americans "commonly regarded as a disease of small moment," Lindsley was at the forefront of a group of public health officials who now saw measles as a potentially life-threatening disease.

Just two years before the measles epidemic that shook the state of Connecticut in 1904, The New York Times had informed its readers that "statistics show that in children under two years of age, the mortality from measles equals 20 per cent, and under five, equals 12 per cent." Measles killed at a higher percentage rate than whooping cough and scarlet fever, two other "childhood" diseases that were commonly viewed as more dangerous than measles.

Because no effective vaccine existed (and would not exist until 1963), Lindsley urged municipalities in his state to use quarantine signs such as this one. But the tendency to view measles as a benign disease meant that quarantines were not, as Lindsley pointed out, rigorously enforced. 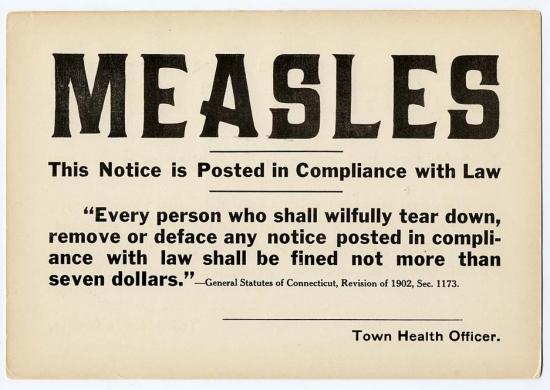 In the absence of a strict quarantine, measles epidemics often erupted. While drug purveyors such as the manufacturer of this medicine often claimed that they could "cure" measles, the disease had no known cure and the results of these epidemics could be devastating. Between 1900 and 1910, an average of 774 deaths from measles occurred each year. Over the course of the next few decades this death rate slowly declined as health care improved, but measles did not totally disappear from America.

Only in 1963 would measles be brought under control. That year, the development of a successful vaccine led several public health officers to speculate that widespread use of this vaccine could permanently eradicate measles by 1967. This ambitious idea reflected the growing confidence of the American medical profession that they could eradicate and destroy a range of infectious diseases. In many ways, this confidence was not misplaced as the medical profession successfully used vaccination throughout the 1960s and 1970s to eradicate smallpox permanently.

Unfortunately, while smallpox vaccination led to the successful eradication of this disease by 1980, eradicating measles proved to be more difficult. Despite a major public health campaign targeting measles during the 1960s, the widespread tendency to underestimate the danger of measles meant that many parents and even some pediatricians were lax about vaccinating children. Further compounding this problem were racial and economic disparities which meant that poor children were less likely to be vaccinated than their white middle-class counterparts.

By the 1980s, measles outbreaks were on the rise again. Ironically, these outbreaks were, in part, the result of improved health measures. Whereas 19th century parents' experiences with measles and other potentially fatal diseases often motivated them to take aggressive action against infectious disease, parents in the late 20th century who lacked these experiences have been less likely to see vaccination as crucial for the health of their child.

Alexandra M. Lord, Ph.D., is chair of the History of Medicine and Science Division.

Posted in Medicine & Science, From the Collections, Invention & Innovation 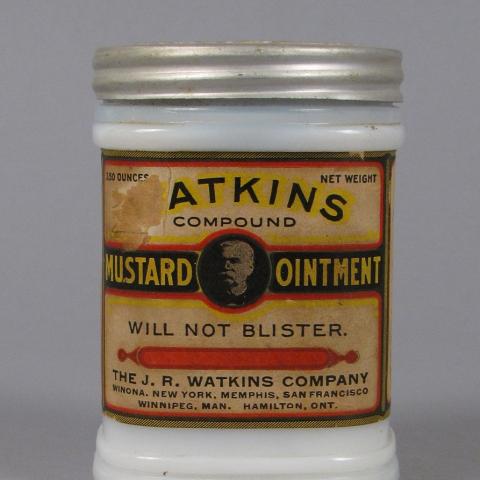 Yesterday's herbals and today's health fads
We are bombarded daily through print and digital media with information and advertisements about "new" products to help consumers with...