"Congratulations! Say, what does a curator do anyway?" "Philanthropy? So, you're in development?" Over the past few months I've heard those questions any number of times.

I recently joined the museum's staff as the David M. Rubenstein Curator of Philanthropy. I am thrilled to be here, and family and friends have been very happy for me. Turns out, though, a lot of folks don't know what the work of a curator is, nor have they encountered the history of philanthropy as a topic in a museum before. So what a curator of philanthropy might do is something of a mystery—understandably since the history of private giving for the public good has not previously received much attention from museums. 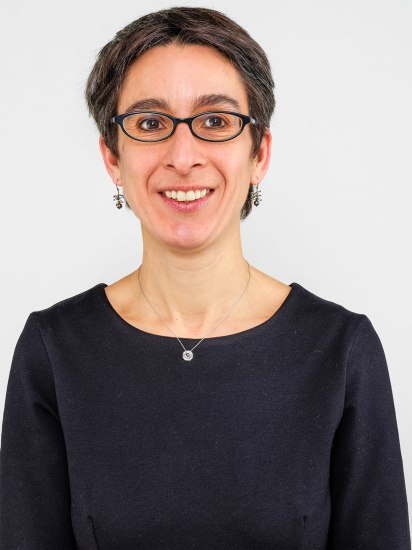 That's changing. Besides establishing the new curatorship, the museum recently launched the Philanthropy Initiative—a long-term project to collect, research, document, and display materials relating to the history and impact of American giving, broadly defined—from gifts of time and expertise to social activism and funding. An annual program, The Power of Giving: Philanthropy's Impact on American Life, and new exhibition, Giving in America, explore the collaborative power of giving in all forms and at all levels across a wide spectrum of issues and movements. Along with myself, the Philanthropy Initiative team includes program manager Anna Karvellas.

A permanent exhibition, Giving in America examines philanthropy from the colonial era to today. It's organized around four questions: Who Gives, Why Do We Give, What Do We Give, and How Do We Give. It highlights the broadly participatory nature of this defining American tradition. The exhibition includes one section focusing on an annual topic; this year, it's "Sustainability and the Environment." 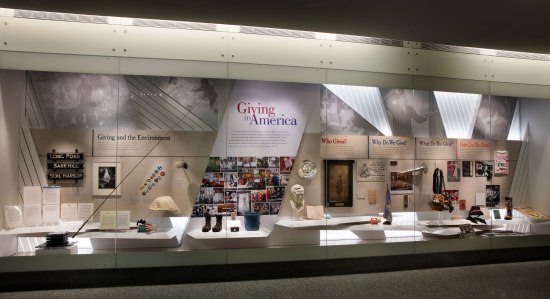 In addition to showcasing the many causes Americans have supported throughout our history, the exhibit underscores that philanthropy includes gifts of time and talent, along with treasure. Perhaps my favorite thing about the exhibit is seeing people come by, spot the UNICEF collection box, the Race for the Cure T-shirt, the Habitat for Humanity tool belt, or something else, and say "Oh, I did that." Whatever we give to, however we give, or even if we critique giving, we help shape American history.

With the exhibition opened, what is there for me to do? By way of explaining my role, I'd thought I would lay out my plans for the coming year. They fall into the three broad categories of curators' work: learning, collecting, and sharing.

Learning, or research, is a major facet of curators' work, and I have also begun research for the Philanthropy Initiative's focus next year, Culture and the Arts. Besides reading the work of other historians and digging into original sources, I am talking with people in the philanthropy community.
Since I am trained as an early American historian and my first book focuses on humanitarianism in the 18th and early 19th centuries, the chance to learn firsthand about contemporary giving is a new and exciting opportunity for me. It is also very moving. As I have talked with people—from leading philanthropists to friends, family, and colleagues—over the last couple months, many folks have shared stories about their and their families' giving. I have come to appreciate better that telling the history of American giving is a participatory project.

Collecting is another key component of curatorial work. One of my first tasks is to explore, through a combination of talking with colleagues and using our database, what the museum already holds relating to the history of philanthropy—even if those objects haven't been understood in that way. Then I'll develop a plan to collect objects that add further context to our existing holdings and that capture untold stories about philanthropy past and present. Giving has been a way that many people have contributed to vital public conversations about local, national, and international priorities. I plan to collect objects that help us understand who has been involved in these conversations and in what roles (as leaders, managers, supporters, or recipients), what have we pursued, how have we mobilized resources, and how have we assessed impact over time.

Perhaps the most fun part of a curator's job is sharing. We do that in a number of ways. Exhibitions are one. Particular objects in Giving in America, plus the whole section examining the year's topical focus, will rotate so that over time the exhibition will tell new stories.

Blog posts are another. We have plans in the works for a couple of blog series. Giving in America features pictures and capsule biographies of people—both well-known and less familiar—who have made notable gifts throughout American history. One blog series will introduce these people in more depth. A second blog series will re-examine objects in the museum's collection through the lens of philanthropy. What can a steam locomotive on display in America on the Move tell us about philanthropy? Watch the blog to find out and don't miss my most recent post on the surprising first object I collected, a nest box for Eastern Bluebirds.

I also plan to continue asking others to share their stories. The stories visitors bring to the museum enrich our exploration of American giving. Many, perhaps most, Americans have helped shape American history through giving, and we are eager to have the telling of that history be participatory too. Watch the blog for ways to contribute your stories, ideas, and questions to our national exploration of historic and contemporary giving.