Finding new stories in an old house: Chance Bradstreet and "Within These Walls" 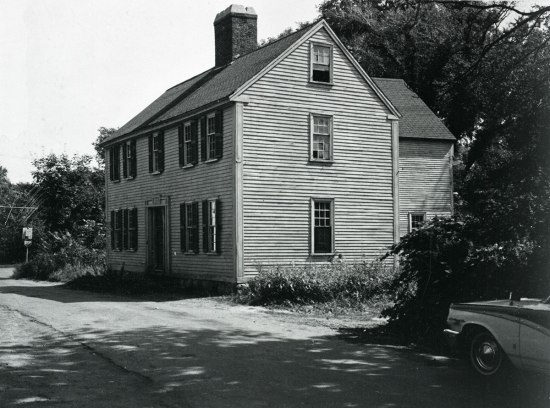 My job is a lot like detective work. I’m a curator of the Within These Walls exhibition at the National Museum of American History. Within These Walls features five families who lived in a real house from Ipswich, Massachusetts, and their role in 200 years of history. When the exhibition opened in 2001, there were pieces missing from the story. But new discoveries have allowed us to update the exhibition, and we’re excited to share these new stories with visitors to the museum and the exhibition website. It all started when Christopher Child, a professional genealogist at the New England Historic Genealogical Society, visited Within These Walls a few years ago. His research helped us solve a history mystery and launched my own research project to understand how the residents of this house helped build the nation by staking their claim to the promises of the Revolution. I asked this genealogist to share some of his strategies and stumbling blocks, along with tips for you to uncover the history of your own family.

Shelley Nickles: “Chance is a mystery.” This was the original exhibition label explaining that, when we opened Within These Walls in 2001, we knew very little about the man named Chance who was mentioned in the will of Abraham Dodge, the patriot who owned the house during the American Revolution. Tell me about your visit to the exhibition.

Christopher Child: My wife and I visited the museum in 2010 while we were on vacation. We were first drawn to the house, since it was in our home state of Massachusetts. I was especially drawn to the story of the Dodges and Chance, in part because of the lack of known information regarding Chance. I love a challenge. I took a few photographs of the text and decided I would investigate this further when I returned to Boston.

Nickles: The history and voices of enslaved people have been difficult to uncover. In recent years, new research, along with new searching tools unavailable when this exhibition first opened, has helped us understand the important role they played in New England during and after the Revolution. How did you discover more about Chance’s life?

Child: I was expecting some hurdles when I began the research, having researched other families of color in colonial New England. Sometimes this involves a trial-and-error approach, of following leads that might fall through. I did various first-name-only searches on several genealogy websites, AmericanAncestors.org, Ancestry.com, and FamilySearch.org. The first breakthrough came in a hit off of the American Genealogical Biographical Index (AGBI), in a reference to a mention in the Boston Evening Transcript’s genealogical column. Someone (only identified as “E.L.B.,” that’s still a mystery) posted in 1912 that they had a very old psalmbook, identified as belonging to Sarah Bradstreet, which recorded the birth of Chance in 1762 and death of Chance Bradstreet in 1810. This was my first clue toward finding Chance. 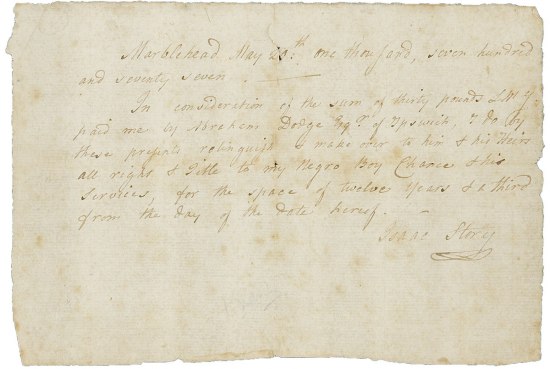 Nickles: There was one fascinating document—a lease—that appeared on the internet that helped put the pieces of the puzzle together. Can you talk about that?

Child: I confirmed that this Chance Bradstreet was indeed an African American enslaved man, as he was identified in the inventory of Sarah’s father, the Reverend Simon Bradstreet. Simon’s son-in-law, the Reverend Isaac Story assumed ownership of Chance after Simon’s death in 1771. The Bradstreet family lived in Marblehead, while the Dodges were about 16 miles away in Ipswich. I did a series of Google searches of “Chance, Negro, Story, Dodge,” and various phrases, in and out of quotes, that I suspected could be referenced if Chance was sold by Story to Dodge. I found a document that was quite amazing, which had only gone up for auction a year or so before this research. This was a lease in 1777 between Isaac Story and Abraham Dodge, in which he leased Chance for 12 years for 30 pounds (the British currency used in Massachusetts at the time). I had no doubt at this point I had found the right Chance!

Nickles: Although enslaved people in Massachusetts successfully challenged the legality of slavery in a series of 1783 court decisions, these documents related to Chance suggest that people struggled for some years over the question of who was free.

Child: Many of the northern states abolished slavery in different ways, but exactly how emancipation took effect in several states is not always clear from the historical record. The 1783 cases essentially said that slavery was illegal under the Massachusetts constitution, but slavery in the commonwealth did not end overnight. Would Chance have known about these decisions? Would he have thought this 12-year lease still bound him to the Dodge family until 1789? The fact that he still was considered property in the 1786 will of Abraham Dodge would indicate even three years after these cases, Chance was still enslaved. 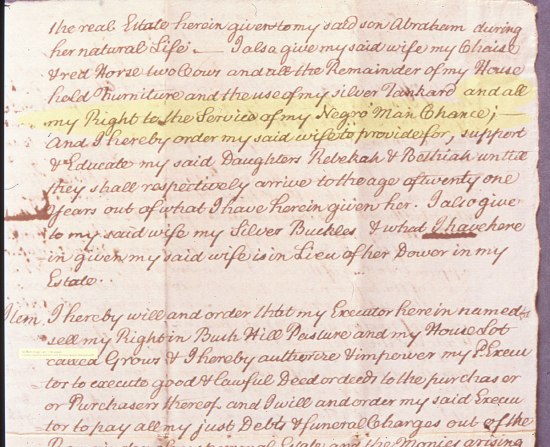 Nickles: And a document I later discovered showed that Chance was still being hired out to work a year later by Abraham Dodge’s widow. One of the most gratifying results of these discoveries was including Chance’s full name—Chance Bradstreet—in the exhibition. It helped restore his humanity, and suggested something about what freedom meant: the ability to choose a name and a place to live when he gained his freedom. How did you find out his name?

Child: I also found a Chance Bradstreet’s death listed in the Marblehead records in 1810. Clearly this was the surname Chance went by once he was free. However, surnames for enslaved and newly freed people of color are not always cut and dried. Phyllis Bradstreet, who I believe is likely Chance’s mother, was also called Phyllis Story in some records, in regard to the change of ownership. But it does appear that after Chance and Phyllis were no longer enslaved, they both used their original owner’s name of Bradstreet. 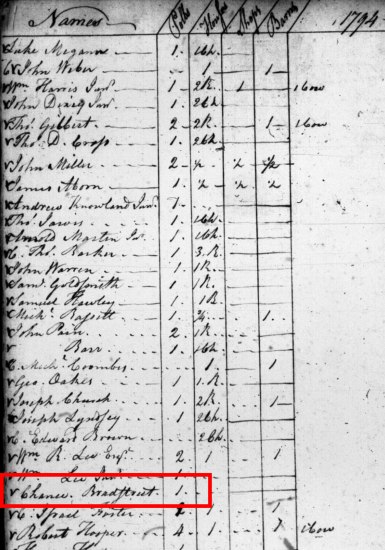 Nickles: Some discoveries, such as Chance’s work on the waterfront, I found by digging through Dodge family and town records in local archives. Marblehead historian Robert Booth contributed his local knowledge to help us trace important details about Chance’s life as a free man after 1794. As genealogists and historians, we have specialized training. What tips can you offer the average person who wants to research the history of her own family?

Child: The records are going to vary depending on where your ancestors lived. Fortunately, in the United States at least, several online databases like the ones I mention above make it possible using vital and census records back to the mid-19th century (and indexes and remote access to many of these source were not readily available when I began over 20 years ago). People might get missed and sometimes ages and names may not always be fluid. I’ve faced numerous challenges in my own family history. Patience and imagination are very helpful when hitting roadblocks. Trying to understand the lives our ancestors lived, and the ways records were recorded, are some good ways you can help uncover the lives of our ancestors.

Christopher Child is a genealogist at the New England Historic Genealogical Society. Shelley Nickles is a curator and Jefferson Fellow at the National Museum of American History.

New content information about Chance is part of an ongoing series of enhancements to the exhibition, continuing throughout the next year and made possible by a generous gift from the National Association of Realtors. The Jefferson Fellowship Endowment Fund was made possible through the generosity of Paul Neely. 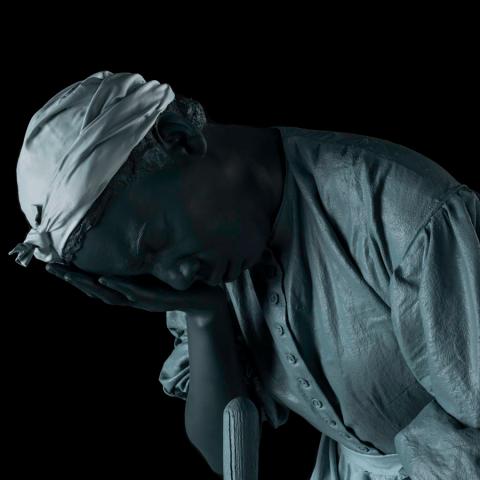 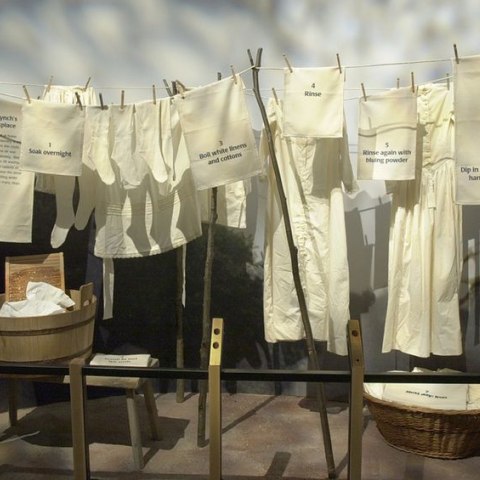