It's often said that necessity is the mother of invention, but it can be the father of invention too. Here’s the story of an innovative father whose solution to an everyday problem is still in use today.

On November 14th, 1961, David and Doris Wagner of Illinois welcomed Jane, their fourth child and first daughter, into the world. Feeling that their family was now complete, Doris soon began taking oral contraception.

The Food and Drug Administration had approved the first oral contraceptive pill only about two years before, in May 1960. Soon known simply as "the pill," it quickly gained popularity, taken by over 1 million women by 1963, most of whom were married.

The oral contraceptive promised a convenient and reliable form of birth control, but it also demanded a certain amount of attentiveness and discipline on the part of the user. When first developed, the pill was dispensed in a bottle of twenty—one pill each day for twenty days, five days off, and then the cycle began again.

Nevertheless, David Wagner explained to historian (and former National Museum of American History curator) Patricia Gossel, "there was a lot of room for error in whether 'the pill' was actually taken on a given day... I found that I was just as concerned as Doris was in whether she had taken her pill or not. I was constantly asking her whether she had taken 'the pill' and this led to some irritation and a marital row or two."

The couple eventually developed a system of laying the pills out on a makeshift paper calendar on the bedroom dresser, which worked well enough for a time. "This did wonders for our relationship," Wagner stated. "It lasted for about two or three weeks until something fell and scattered the pills and the paper all over the floor."

Realizing that the system necessitated a kind of carrying case to be truly efficient, Wagner began sketching ideas. 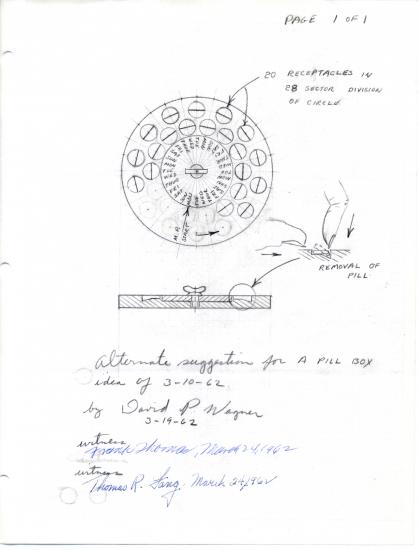 His background in engineering helped him to build a prototype dispenser using just "a ¼' drill, a fly cutter to be used in the drill, paper, a saw, a staple, pencil, double-faced transparent tape, several drill bits, a snap fastener that [he] took off a child's toy, and several flat, clear sheets of either acrylic or polycarbonate plastic." In choosing a shape, he made the case "indistinguishable from a lady's cosmetic 'compact' and adapted to be carried among the personal effects of a lady in a purse without giving a visible clew [sic] as to matters which are no concerns of others." His prototype is recognizable as the father of the still familiar compact-shaped dial packs for oral contraceptives. 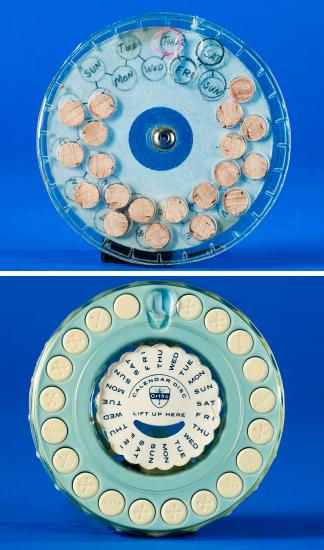 David received a patent for his invention on August 4, 1964. Nearly every American pharmaceutical company who brought a birth control pill to the market in the 1960s employed some adaptation of his design. Though other forms of packaging have since joined the market, the compact-style dial pack remains a common sight in medicine cabinets (and purses) throughout the country. 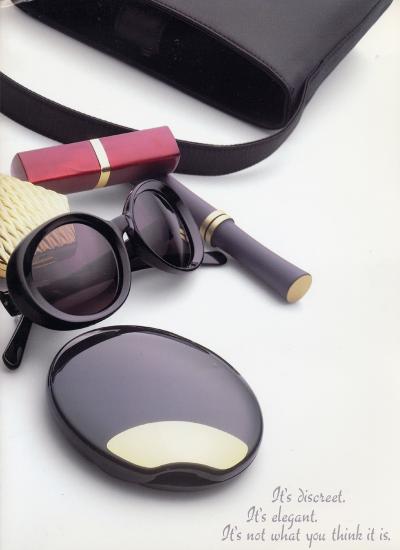 Come see the pill pack prototype in person! It's on display in the exhibition case The Early Sixties: American Science through August 2015.Can’t make it to the museum? Enjoy our digitized collection of historic birth control. Diane Wendt is a curator of pharmacy and public health in the Division of Medicine and Science. Mallory Warner is a curatorial assistant in the Division of Medicine and Science.