Boston-area photographer George K. Warren, with studios variously in Lowell, Cambridge, and Boston, started as a daguerreotypist in the 1840s. He transitioned to the wet plate collodion process that clearly allowed photographers to play a bit more in the darkroom. Here are four examples by Warren and two by other photographers who created "combination prints" by cutting and pasting photographed heads on drawings, then re-photographing to flatten into one negative and print as often as he liked. These small photographs reflect exploration with a new technology and creative impulses—not to mention a sense of humor! 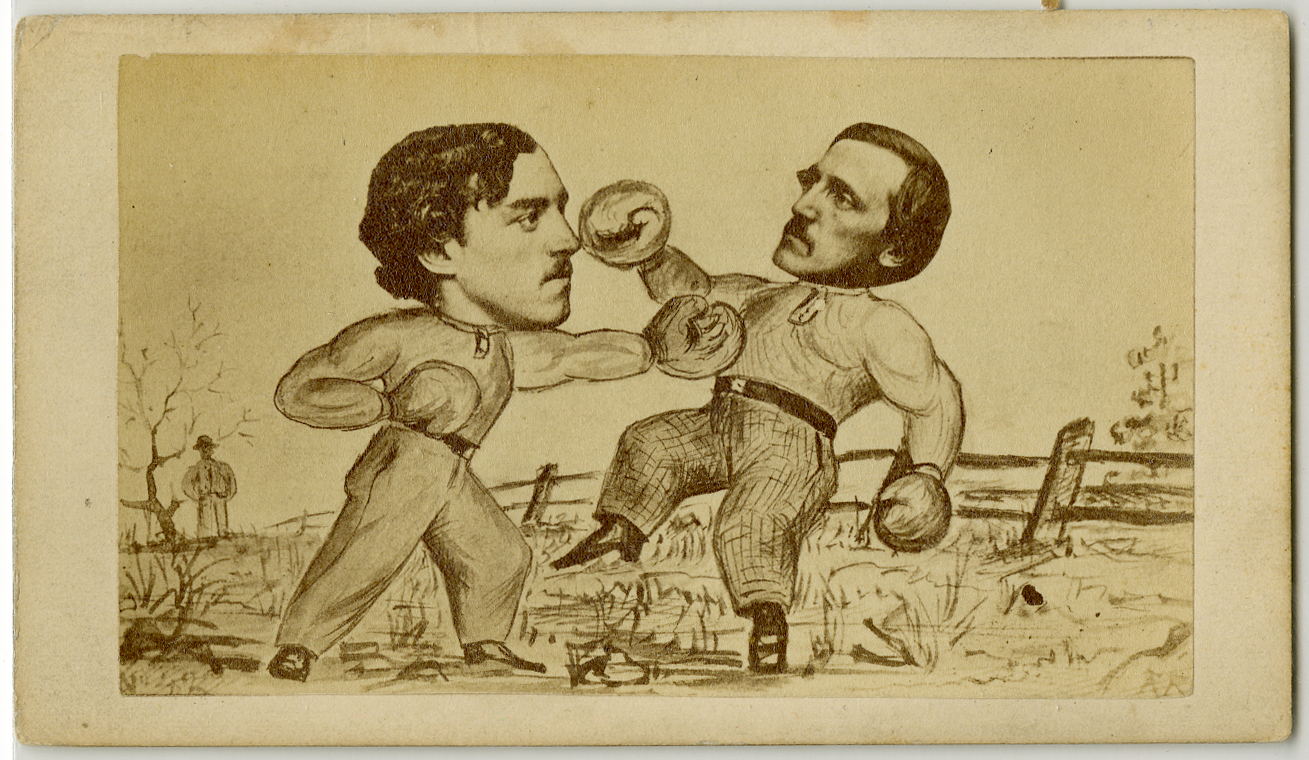 Warren (right) vs. McPiven. Warren seems to be losing as McPiven's punch causes him to lose his balance. McPiven barely avoids a punch to the right side of his face. In the distance, a man seems calmly drawn to watch the pugilists. It is unclear who McPiven is, a rival? an assistant? a friend? 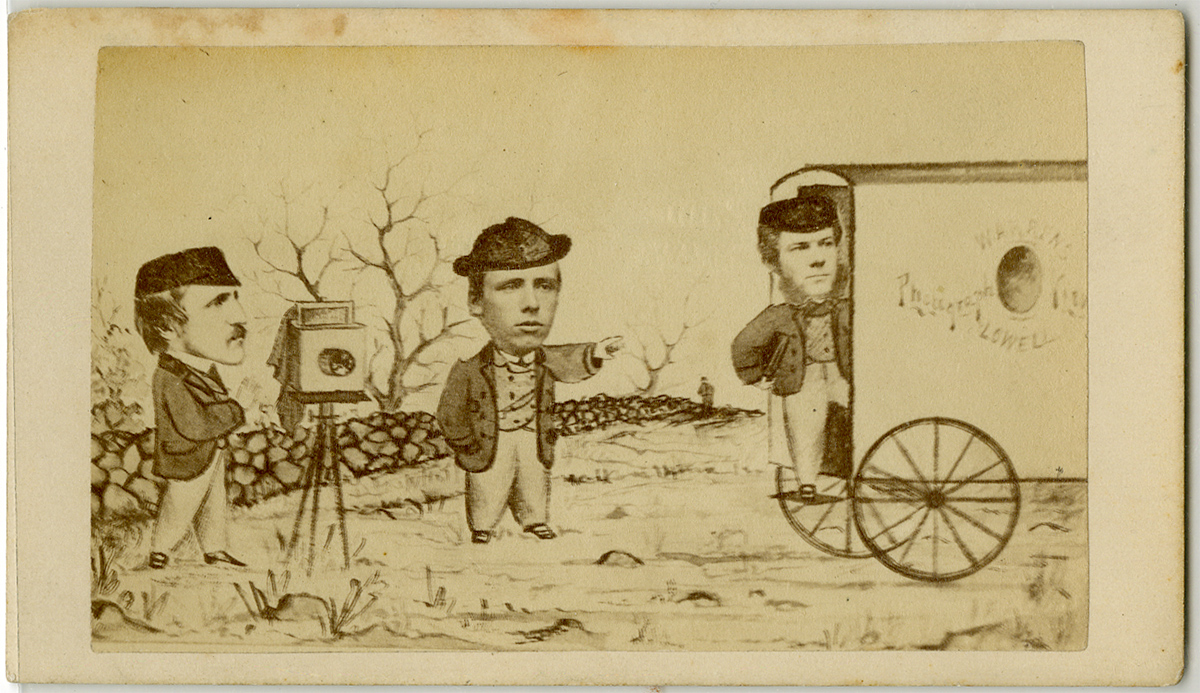 Warren has camera and will travel. In fact, Warren took his camera to many college and university campuses in the northeast to make a name for himself as an early and prolific yearbook photographer. With his name and location of his studio, perhaps this was a whimsical business card. 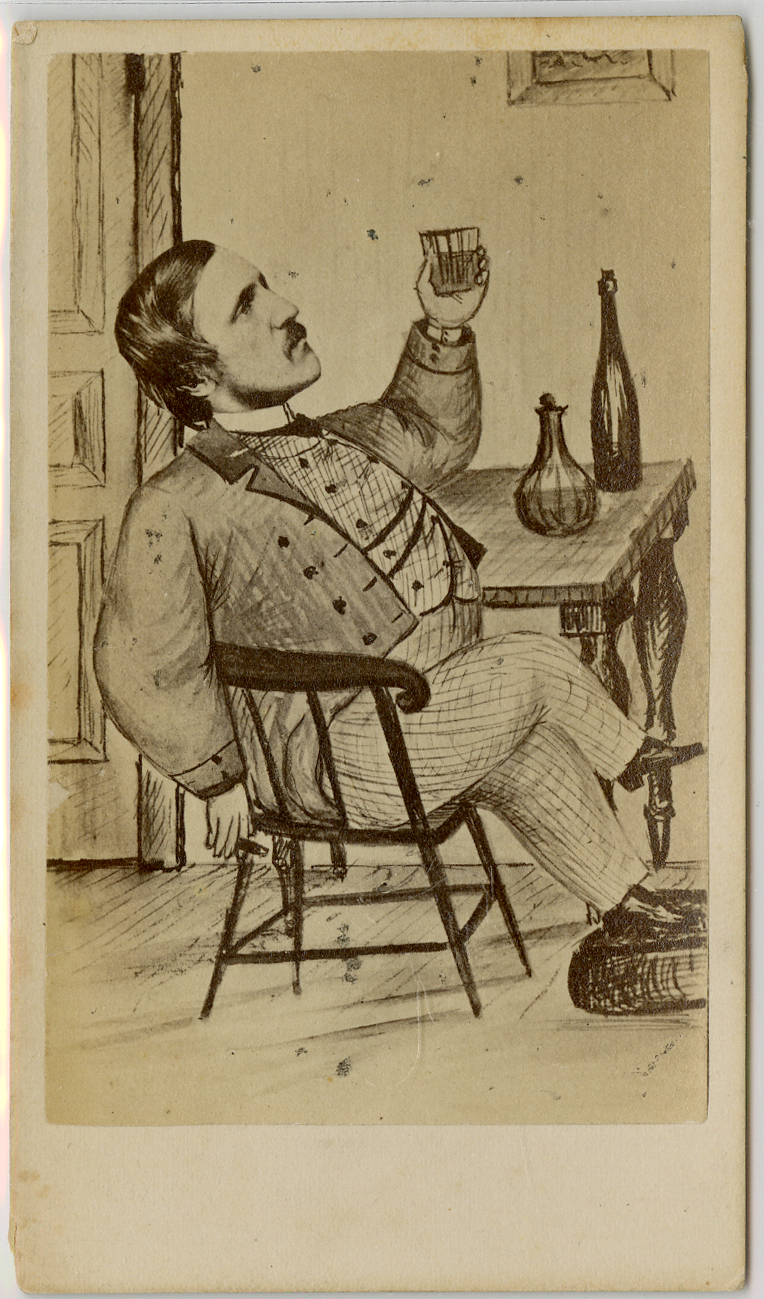 Cheers! Warren tips a glass! Yearbooks at the time were quite large and beautifully bound, sort of like the tome under his feet. Perhaps he's celebrating after yet another yearbook project is all wrapped up. 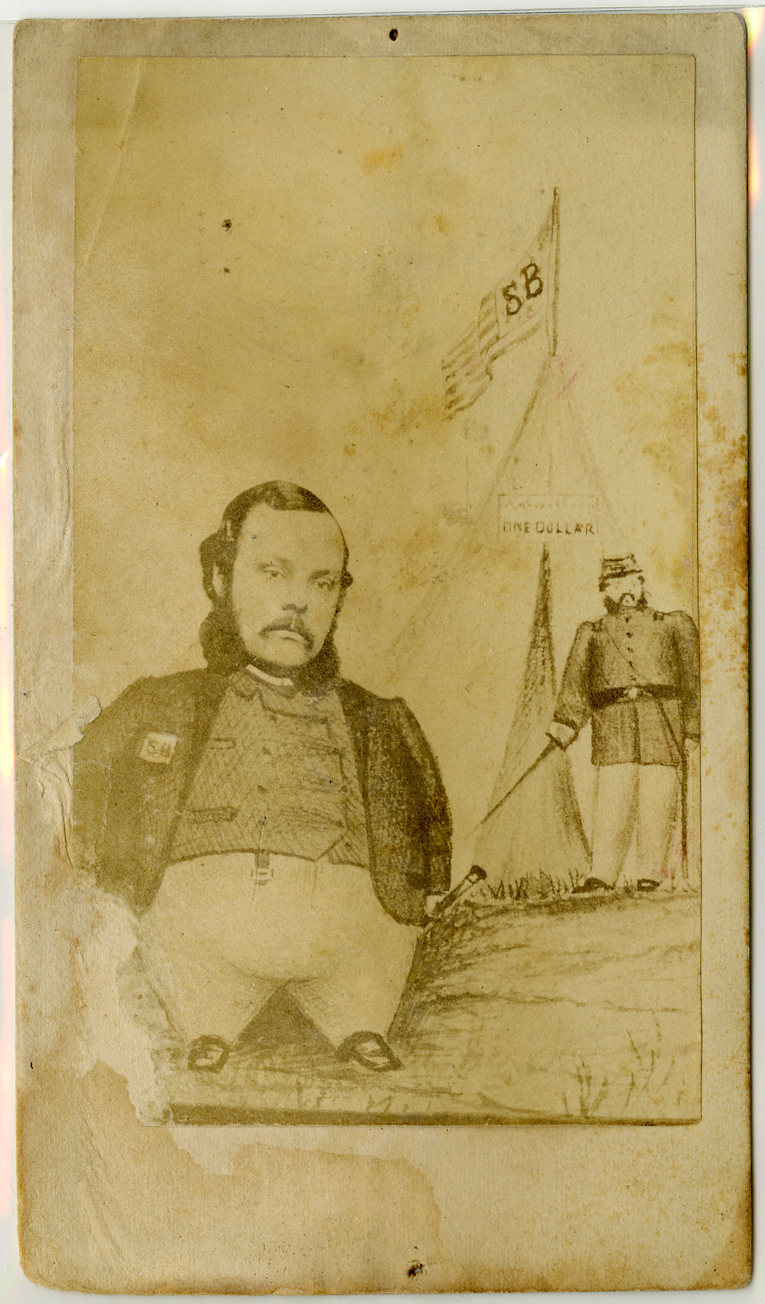 Warren created a political cartoon by pasting this mutton-chop man's head on a rather pudgily drawn body in civilian clothes and tagged him, "S.B." In the background, entrance to the tent is guarded by a sword-wielding soldier and a one dollar admission fee payable to Mr. S.B. Hmm, this seems to be a joke about a civilian getting rich from an American war effort. 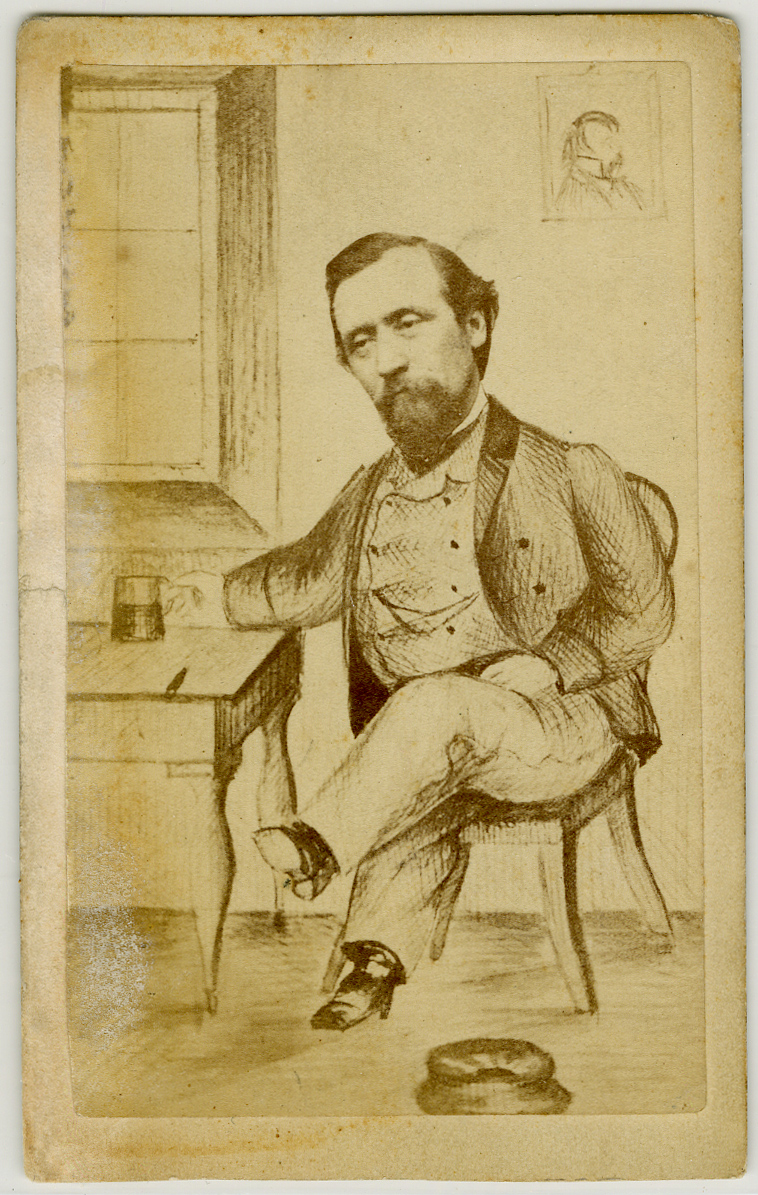 N.C. Sanborn of 50 Merrimack Street, Lowell, Massachusetts, popped this man's head on a tiny-footed body, giving him a mug and a spittoon. There is a sketchy, shaggy, bearded fellow framed in the background. 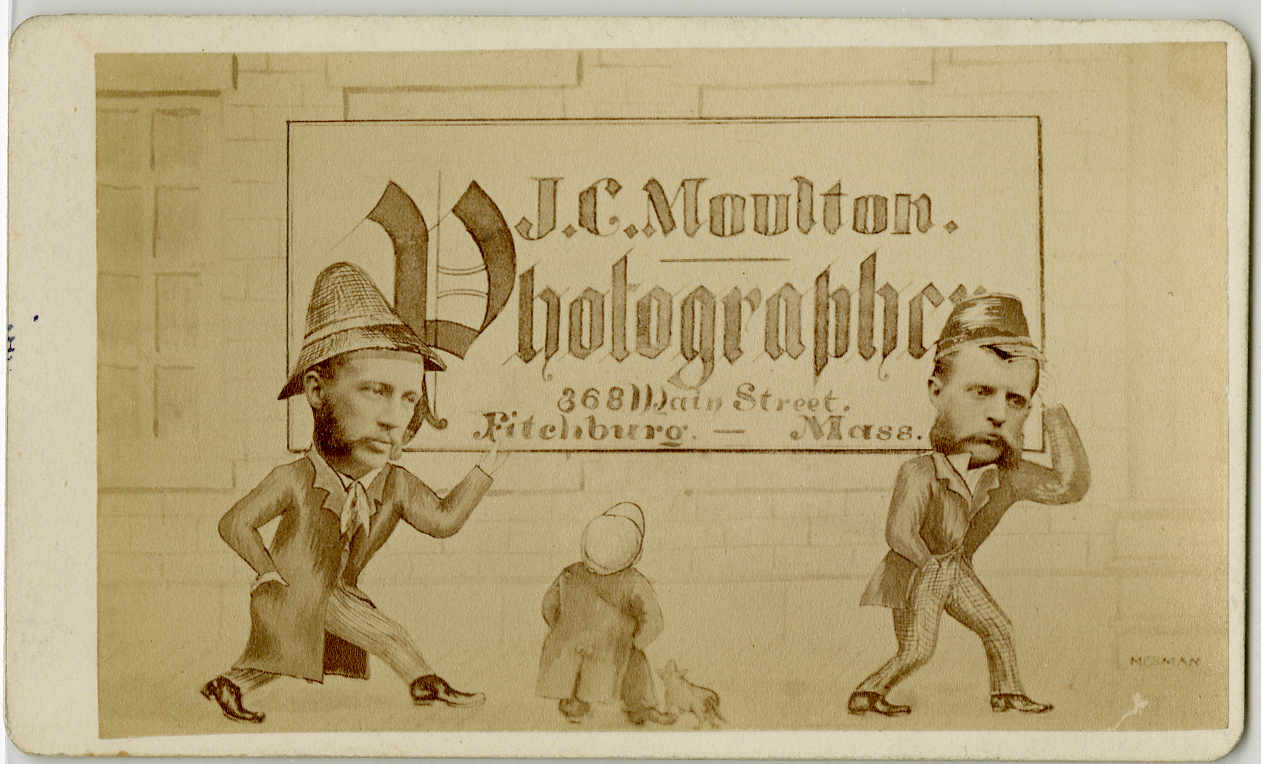 J.C. Moulton at 368 Main Street, Fitchburg, Massachusetts, offers up his face, perhaps as one these dapper men. The child with his dog seem most curious about this combination print business card.

Shannon Perich is Curator for the Photographic History Collection. She has also blogged about exaggeration postcards, featuring giant grasshoppers.

Want more stories of American creativity and inventiveness? Join us to explore the theme of American innovation through blog posts, exhibitions, collections, programs, and more. 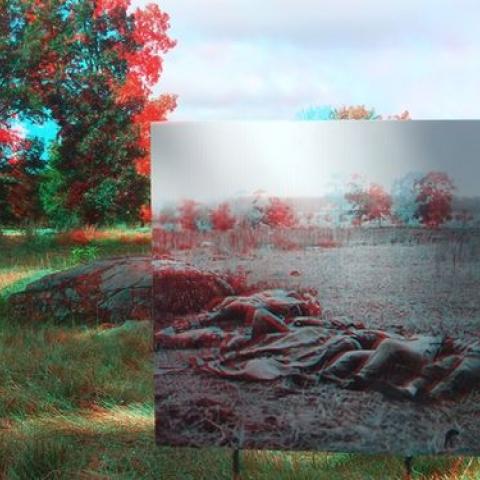