Rosie, Wendy, and Government Girls: The women behind the war

In 1943, faced with labor shortages during World War II, U.S. Secretary of War Henry Stimson began promoting the “Get Women to Work” campaign. To win the war, Stimson stated, the United States would need to "fully utilize, immediately and effectively, the largest and potentially the finest single source of labor available today—the vast reserve of woman power." Despite numerous obstacles, women across the country stepped up to fill jobs left vacant by men serving abroad. Women who had not worked outside of the home applied for defense jobs; others who had only worked in domestic service left for better paying positions in the war industry.

Today, we often associate the women workers during World War II with the popular symbol Rosie the Riveter—and with good reason. Rosie was (and is) the most popular representation of women who worked in the U.S. war industry. However, as the museum's collections show, "Rosies" were just one of the many types of women workers during the war.

Despite the need for workers, not all women had the same opportunity to join the war industry. Racism and segregation made it difficult for women of color to find a job and to get promoted once they had been hired. Often women with degrees, certificates, and skills were passed over or assigned jobs unrelated to their experiences. Shirley Graham’s 1945 short story “Tar” exemplifies the struggles of many African American women during World War II. The main character, Mary, quits her job sewing for a white woman, enrolls in a defense course, then seeks work. At factory after factory, she is turned away simply because of her race. Finally, with a letter of recommendation from the husband of a former employer stating she was an “honest” and “personable negress,” she obtains work pouring tar from vats, despite having excelled in her course in cutting sheet metal.

Rosie the Riveter became the symbol of the thousands of women who worked to build bombers, transports, and fighter planes. The rivet that Rosies used was a short cylindrical metal pin or bolt complete with a mushroom cap on one end. Riveters and buckers worked in teams; the riveter held the air-powered rivet gun that pushed the rivet through a predrilled hole against a metal plate called a bucking bar, held by the bucker. When the rivet slammed into the metal plate, it was flattened and created a seal that held two metal plates together. Partners developed a rhythm and could complete hundreds of rivets an hour. Rivet guns were heavy and noisy, and their vibration made them difficult to hold. Both the riveter and the bucker had to be physically strong. Frequently, they would change places for a change of pace and to relieve aching and sore muscles. Over the course of the war, Rosies built some hundreds of thousands of airplanes and tens of thousands of tanks and jeeps alongside millions of small weapons and billions of rounds of ammunition.

Rosie’s less well-known cousin, Wendy the Welder, represented the women who welded and assembled steel plates into troop ships, supply ships, submarines, and aircraft carriers. (Their work was possible in part because of Henry Kaiser, known as the father of modern shipbuilding. He developed production techniques that decreased the time it took to build cargo ships). Prior to the war it took around 45 days to build a cargo ship, known during the war as a Liberty Ship. After assembly line production was put in place, Wendys were able to build a Liberty Ship in a week. Wendys had to wear goggles or helmets with dark UV filtering to protect against “arc eye,” as ultraviolet light causes inflammation of the cornea that can burn through to the retina. Many Wendys suffered first- and second-degree burns, and the fumes and gases contained heavy metals that created long lasting adverse health issues. During the war Wendys built thousands of Liberty ships, Victory ships, destroyers, aircraft carriers, submarines, cruisers, landing craft, and battleships. In 2011 a steel structure was dedicated to memorialize the Wendy Welders who worked in the shipyards of the Pacific Northwest.

Government Girls were cousins to Rosie and Wendy. They represented the women who primarily filled administrative positions in the defense industry and government agencies. Like Rosies and Wendys, Government Girls stepped in to fill jobs that were previously held by men. Most began with basic secretarial work such as typing payroll rosters, requisitions, and supply lists for both the war front and the home front. Limited gains were made by women of color in white collar jobs in newly formed government agencies to aid in the war effort. For some women, their jobs allowed for advancement to work with the FBI and OSS (Office of Strategic Services, later the CIA). These women would receive vital war information, analyze it, and pass it through appropriate channels. “Human Computers”—those with a strong background in math and analysis—also fell under the heading of Government Girl. Many Government Girls had completed high school and were college educated. Unlike their counterparts who worked in industry, they did not have as strict restrictions on their clothing and were able to wear dresses. However, wartime rationing meant that Government Girls had to be innovative. When nylon became scarce, some women used products that let them "paint" stocking on their legs.

Once the war ended, most of the women who had taken on wartime jobs were terminated to make way for returning soldiers. Women of color were often the first laid off. Many of the women workers were not eager to return to the home, as they had enjoyed the financial freedom that their jobs had provided. The women who remained in the workforce were still paid less than men. Despite these struggles, the Rosies, Wendys, and Government Girls were able to change the view of women and what they could accomplish.

Sara Murphy is a museum specialist and collections manager in the Division of Political and Military History. She has previously blogged about how first families have memorialized and mourned, as well as the the process of exhibition installation. 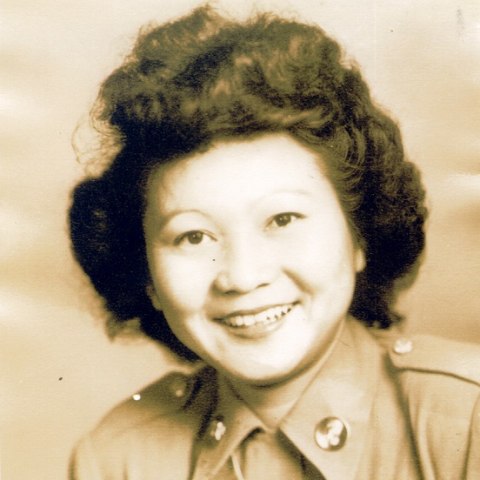