Sitting-in for disability rights: The Section 504 protests of the 1970s

For 25 days in April 1977, a group of roughly 150 disability rights activists took over the fourth floor of a federal building in San Francisco. They would not leave, they said, until President Jimmy Carter's administration agreed to implement a four-year-old law protecting the rights of people with disabilities.

The activists and their supporters outside the Health, Education, and Welfare (HEW) building wore pins and T-shirts, and waved banners declaring their support for Section 504 and for the rights it guaranteed to people with disabilities. The material culture from the sit-in continues to communicate to the world who these activists were, why they were there, and what they were fighting for. The objects left behind, like the memories of those who were there, are traces of a moment when people organized to secure their rights, to reject charity and pity and instead demand equality. 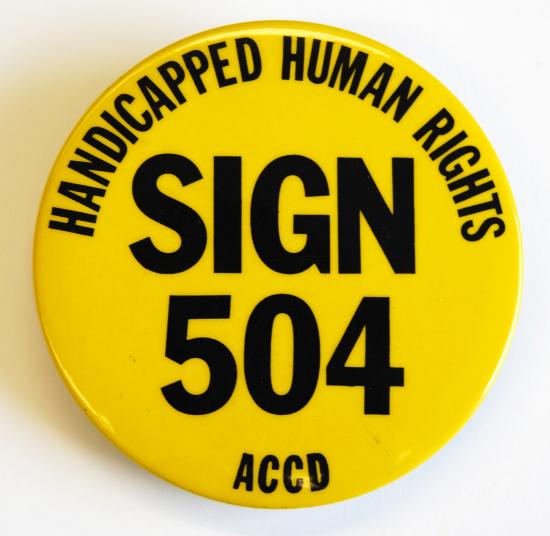 Section 504 of the Rehabilitation Act of 1973 helped pave the way for the ADA. Under the law, no program receiving federal funds could discriminate against people with disabilities. But the law was never properly put into effect. Officials in Richard Nixon and Gerald Ford’s administrations developed but never implemented a set of regulations for the law.

As the date arrived with no response from Califano, hundreds of people with disabilities and their supporters sat-in at HEW offices in several cities around the country. Most of the sit-ins lasted only a day or two, but in San Francisco the sit-in lasted nearly a month. 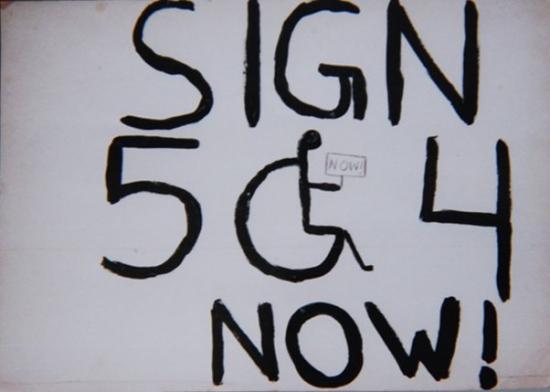 The choice to hold a sit-in as opposed to other tactics had symbolic significance. Sit-ins were used effectively with the 1960s civil rights movement. More importantly, a sit-in upended popular notions of people with disabilities as weak, incapable of asserting themselves, or as objects of pity. Activist Judith Heumann explained, "Through the sit-in, we turned ourselves from being oppressed individuals into being empowered people. We demonstrated to the entire nation that disabled people could take control over our own lives and take leadership in the struggle for equality."

On the first day of the sit-in, San Francisco HEW officials did not take the protestors seriously. Heumann later recalled "At the start of our demonstration at the HEW offices, officials treated us with condescension, giving us cookies and punch as if we were on some kind of field trip." They soon realized that the protestors would not be placated, and that they planned to occupy the building until Califano signed.

The sit-in brought together a cross-disability coalition of activists. According to Judith Heumann, "Blind people, deaf people, wheelchair users, disabled veterans, people with developmental and psychiatric disabilities and many others, all came together." The experience created a strong sense of solidarity. "We overcame years of parochialism," Heumann later remarked.

The day-to-day experience of a month-long sit-in would be grueling for any group, but it posed particular challenges for the Section 504 demonstrators. Some of the San Francisco activists truly risked their lives. One demonstrator later recalled, "discomfort and anxiety was the order of our day to day existence. Everyone faced these questions, How can I get my meds? Where will I sleep? What about food?"

The demonstrators received support from outside groups, such as the Black Panther Party, which provided them with food throughout the sit-in. But many went without the care of attendants, or back-up ventilators, catheters, or other necessary equipment. Bill Blanchard, a wheelchair user, later remarked "I seem to remember spending the first couple of nights sleeping in my chair because it meant less transferring and less having to ask strangers for assistance."

Kitty Cone recalled "wolfing down" sleeping pills at night to get through the pain. The sit-in also meant a loss of privacy. "Every morning," one demonstrator remembered, "you could come across people involved in various forms of personal care activities and in various stages of dress and undress."

The physical effects of the occupation lasted long after the sit-in ended. For Brad Lomax and Steven Klein, both of whom had multiple sclerosis, the stress led both men to have, according to Cone, "pretty severe exacerbations of their MS." Nevertheless, for Blanchard as for many other demonstrators "The discomforts... meant nothing in comparison to the importance of 504 being signed." 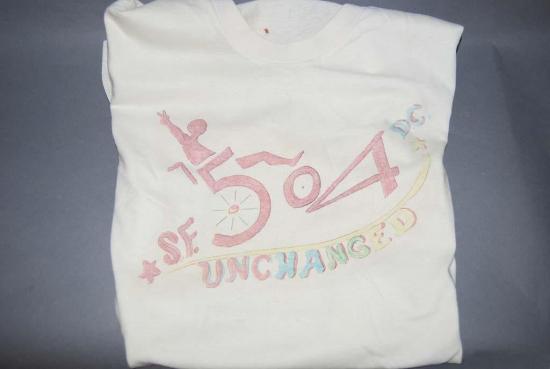 On April 28, 1977, Califano signed the Section 504 regulations unchanged. While the disability rights community would have to wait until the 1990 Americans with Disabilities Act for more robust protections against discrimination, Section 504 was a significant victory. 2015 marks the 25th anniversary of the signing of the ADA. This year it is important not only to celebrate what the disability rights movement has achieved but also to take stock of how we got here. The sit-ins were, according to Kitty Cone "the public birth of the disability rights movement... For the first time, disability really was looked at as an issue of civil rights rather than an issue of charity and rehabilitation at best, pity at worst."

Andrew Grim is a PhD. student in the history department at the University of Massachusetts Amherst.