In 1945, Jack Fisher of Kalamazoo, Michigan, celebrated a victory, one of the first of its kind in the United States. Jack, a disabled veteran and lawyer, was elated because his hometown had just installed the nation's first curb cuts to facilitate travel in the downtown area for wheelchair users and others who couldn't navigate the 6-inch curb heights on downtown sidewalks. 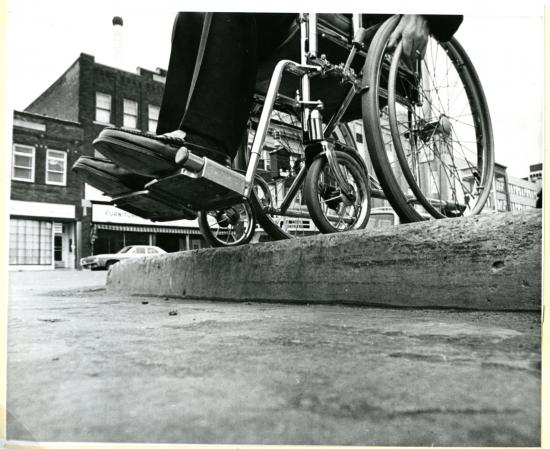 Today, this seems like an odd thing to rejoice about, since curb cuts are now so commonplace in cities throughout the U.S. However, sidewalks and public spaces in the built environment were not always so accessible to people with disabilities. The development of curb cuts and the concept of accessible public spaces has been long in the making and has only become possible through the hard work of activists like Mr. Fisher, the passage of federal legislation on accessibility requirements, and developments in design.

Wheelchair-using individuals have navigated obstacles in the built environment since the first wheelchairs. In the 1940s and 1950s, a large contingency of veterans returned from World War II with mobility-related injuries. Many of these individuals pushed for changes to the built environment to make college campuses and public spaces more accessible to wheelchair users and other disabled people. On the University of Illinois campus, disabled veterans got around campus any way they could, sometimes hitching rides on service trucks since sidewalks did not have accessible ramps for them to move from building to building. 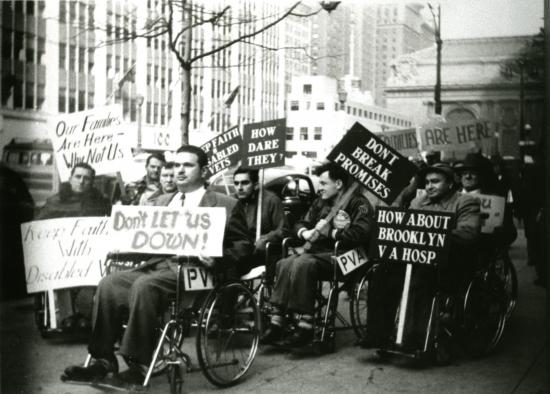 Disability activism was not confined to veterans' groups; others protested for accessible spaces in urban areas by physically taking to the streets and smashing curbs to create their own accessible ramps. In the 1970s, Hale Zukas and other founders of the Independent Living Movement in Berkeley, California, organized to establish a wheelchair route through the University of California campus and the town of Berkeley. They even built curb ramps themselves, covertly laying asphalt in the middle of the night to create their own wheelchair accessible infrastructure.

Eric Dibner, a member of the Independent Living Movement, joked during an oral history interview, "Well, you didn't hear about the nitroglycerin where we were blowing up curbs and... jackhammers in the middle of the night, where we'd go and we'd jackhammer up all these intersections, and then the city would have to fix them." Of course this story was exaggerated, but having to come up with their own solutions for overcoming architectural barriers was an everyday reality for these activists. 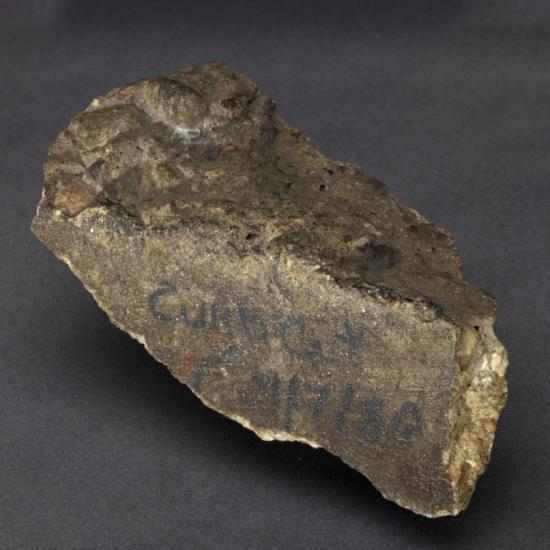 While these activists were taking their own measures to ensure the world they lived in was accessible to them, federal legislation increasingly recognized rights for disabled Americans. In 1968, the Architectural Barriers Act was passed in Congress, which required that federally funded facilities remove obstacles in the built environment. While limited in scope, this breakthrough in legislation reflected the work of disability activists and laid the groundwork for the 1990 passage of the Americans with Disabilities Act (ADA). The ADA prohibits discrimination and provides for equal opportunities for people with disabilities, laying out accessibility standards for buildings and public spaces throughout the U.S. 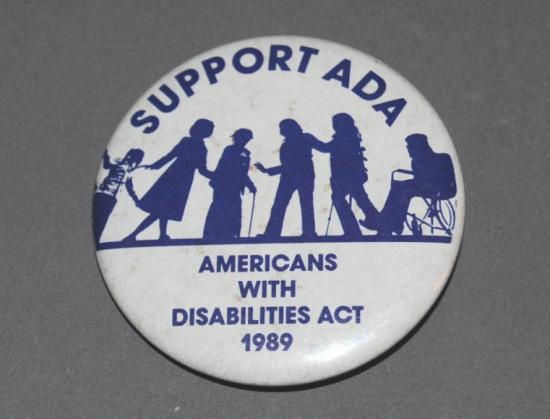 The design world also responded. Ronald Mace, an architect and designer at North Carolina State University in Raleigh, along with other architects, developed a set of design principles known as Universal Design. While Universal Design principles are typically applied to building interiors, these design concepts are also used to enhance outdoor physical space and make sidewalks, streets, and other public spaces easily navigable for everyone.

Disability activists have refused to accept the status quo. Since the mid-20th century, they have persisted and influenced public policy, resulting in legislation that made discrimination against those with disabilities illegal. Today, through processes like Universal Design, we continue to see a shift in society's mindset toward individuals with disabilities. Designers are approaching the built environment with ever-more innovative solutions to urban architectural obstacles facing disabled people.

Julie Peterson is a master's student in the Public History program at the University of Massachusetts, Amherst. She studies 20th century U.S. urban history, social justice and mass incarceration, and museum interpretation and public programming.