It's that time of year again. The Seattle Seahawks return to the big game on Sunday, this time taking on the New England Patriots, and here at the museum, we're bringing out more of our own "super bowls." Laura Simo shares some examples from the collections of the Division of Home and Community Life. 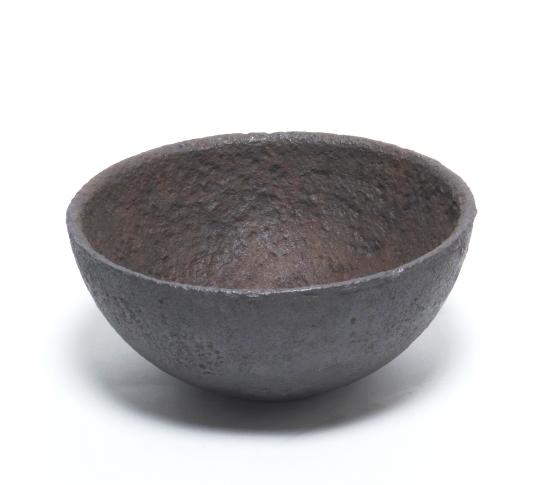 College football has its Iron Bowl, and so do we. Dating back to 1893, the National Collegiate Athletic Association's version, played by Alabama and Auburn, is one of the nation's oldest rivalries. While our iron bowl can't compete in terms of size, it crushes its college counterpart in age by almost 100 years. Made in the United States sometime during the early 1800s, it was cast as one piece from molten iron poured into a two-part mold.

Because iron is hard and can withstand heavy use, a bowl made from it might sound like a great idea. However, iron is far from indestructible. Corrosion on the interior of this bowl has left it rough and pitted. There is rust on the bottom where it had greatest contact with water and moisture over time. Elsewhere, tiny chips along its rim hint at how brittle iron can be. Like glass, it will crack under tension and, if dropped, this bowl could easily shatter to pieces. These shortcomings, coupled with the fact it is heavy, could account for why we don't find many old iron bowls—either they do not survive or perhaps not many were made to begin with. 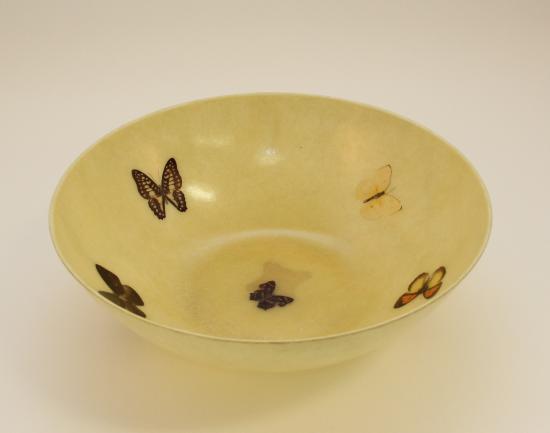 The strongest contender for the toughest bowl in our lineup is this Vesta serving bowl made by the Kimball Corporation of San Rafael, California, around 1960. Don't let its feather-light weight, charming butterfly decoration, or delicate-looking, translucent pale material fool you: it is made of fiberglass or, technically speaking, glass fiber reinforced plastic. Looking at it against the light, you can clearly see the network of crisscrossing glass yarns captured inside, fused together with polyester resin by heat and pressure.

A pioneer in fiberglass manufacture, William R. Kimball founded his company after reading a magazine article about the material in 1951. At first, he made specialty industrial items but quickly diversified into consumer goods. He was America's first, and for a time its largest, fiberglass water ski maker. His expansion into household goods began by accident when he turned over a pump motor form and mounted it in a metal stand as a planter. Thousands quickly sold across the country, snapped up by Americans eager for modern goods made of space-age materials that could be transformed into any shape and in a variety of colors and patterns. 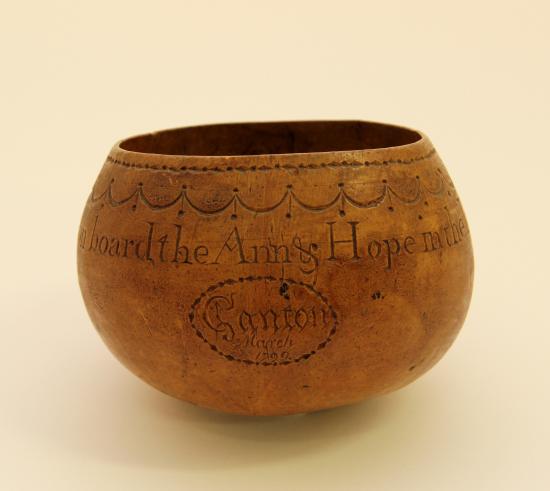 When it's third down and ten, a first down can seem like half a world away. In the case of this coconut shell bowl, it actually has travelled half the world. The inscription carved around its exterior says it all: "ISAIAH BURR on board the Ann and Hope in the Indian Ocean from Canton March 1799." Many 18th- and 19th-century sailors like Burr passed their time on long sea voyages crafting keepsakes from exotic objects they collected along the way. But the Ann and Hope's journey is notable for being that vessel's first trip to China—a fact Burr certainly knew when he chose to record his whereabouts on this bowl.

Built by the prominent mercantile trade firm of Brown and Ives of Providence, Rhode Island, the Ann and Hope left port on July 9, 1798, and arrived in Canton in early 1799. Laden with tea, gunpowder, china dinner and tea sets, nankins (a type of cotton fabric), and silks, she departed for home on February 10, 1799. As Burr’s bowl documents, the ship sailed into the Indian Ocean one month later. They finally returned to Providence on June 15, 1799. 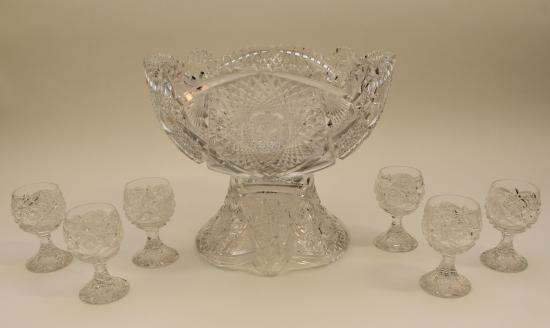 Produced at the turn of the 20th century, this exquisite punch bowl, matching pedestal and footed cups is a supreme example of the American Brilliant Period, when the United States, fueled by new sources of energy and an influx of highly-skilled European craftsmen, led the world in glass cutting. American glass companies vied to create ever-more complicated designs. The "Hawthorne" pattern seen on this punch bowl is truly a tour-de-force of the glasscutter's art. All elements of the design, distinguished by the intricate 32-point hobstar on each of the bowl's sides, were produced using only hand-operated rotating wheels. 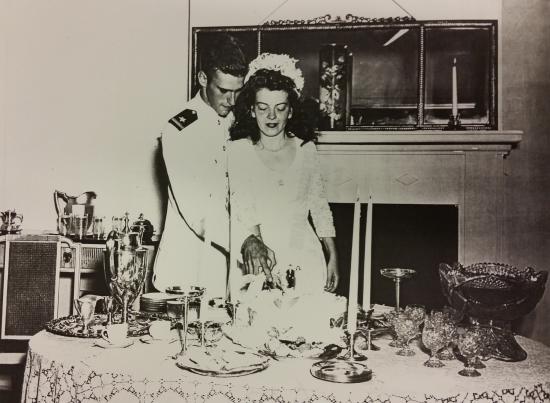 The donor's grandparents purchased this punch bowl when furnishing their new home in Takoma Park, Maryland, around 1905. The set formed the centerpiece of her grandmother's prized cut glass collection, which she proudly displayed in a specially-made cabinet. The family rarely used the pieces, only taking them out for special occasions, such as the donor's wedding on June 11, 1945. Following the deaths of her grandmother and father, she inherited the prized family heirlooms, caring for them until she donated them to the Smithsonian in honor of her grandmother. 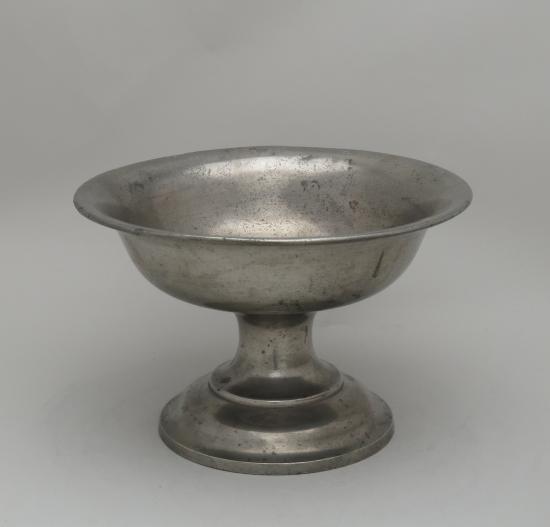 Finally, just as there are sports besides football, there are bowls made for purposes other than preparing, serving, and consuming food at home. This baptismal or christening bowl was made for ecclesiastical use by Roswell Gleason of Dorcester, Massachusetts, around 1834. It entered the museum collections along with a flagon (or tall pitcher) and two chalices (sacramental goblets) for serving communion. An engraved inscription on the associated flagon records the pieces as gifts from David S. Jones, presented in January 1835 to the First Methodist Church in Greenfield, Massachusetts. Jones helped establish the congregation the year before and also served on the committee overseeing construction of its first building.

All four pieces are made of Britannia, a white metal alloy harder and brighter than pewter. When new, these objects gleamed like silver but cost less, making Britannia an attractive and affordable alternative to the precious metal. First produced in England in the mid-18th century, American pewterers like Gleason were turning out large quantities of Britannia Ware by the 1830s. Unfortunately, both pewter and Britannia are relatively soft and have low melting points, leading to short lifespans. Many of the finest examples of pewter and Britannia known are from churches where they were carefully preserved (and carefully used) as religious objects.

Laura B. Simo is the C. Malcolm Watkins Specialist in the Division of Home and Community Life at the National Museum of American History. 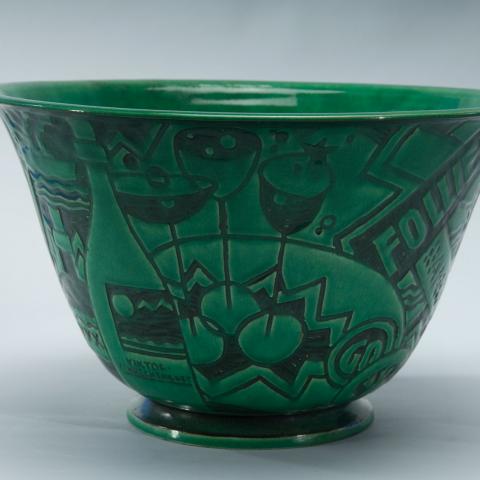