Where can you find the sushi capital of Japanese America? 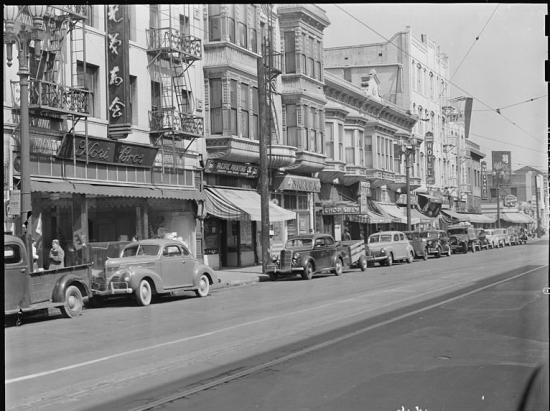 In downtown Los Angeles, the five-block-wide neighborhood known as "Little Tokyo" is home to America's largest Japanese population. (The other two "Little Tokyos" can be found in San Francisco and San Jose.) In 1905, this small area was home to about half of the city's 10,000 Japanese, and remained a destination for newly arrived Japanese residents until the Oriental Exclusion Act of 1924. When the 30,000 Japanese residents of Little Tokyo were removed to imprisonment camps during World War II (1942-1946), their vacant apartments became home to other Angelenos of various backgrounds, increasing the area population to more than 100,000.

After the end of the war, many formerly imprisoned citizens of Little Tokyo relocated further into Los Angeles due to lack of housing, and over the following decades, Japanese-run businesses gained significant influence in the Los Angeles economy. It was in Little Tokyo that sushi made its first big splash, as the neighborhood's restaurants drew attention from Japanese businessmen and their American colleagues. Eating Japanese food in Little Tokyo has become a political statement for many of its residents, especially those who are fourth-or fifth-generation. While earlier generations may have grown up adapting their meals, traditional Japanese ingredients are now readily available to their grandchildren. Today, Little Tokyo is officially a historic district, and home to some of the most significant businesses and cultural centers in America.

Without rice and fish, how did Japanese food traditions survive? 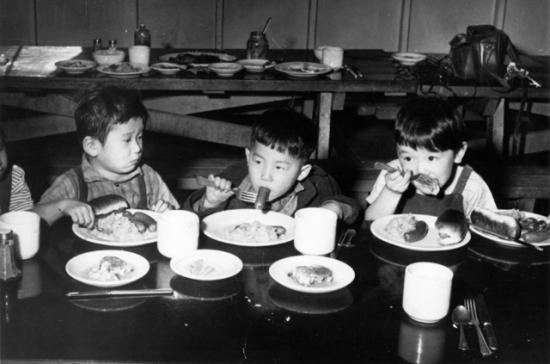 Japanese immigrants to America have been adapting their cuisine ever since they first arrived in Hawaii in the late 1880s—and sometimes under duress. In 1942, following the Japanese attack on Pearl Harbor, President Franklin D. Roosevelt signed Executive Order 9066, authorizing the round-up of 120,000 Japanese-Americans to be relocated to 10 imprisonment camps—so-called "relocation centers"—across the West Coast and Great Plains.

In these camps, meals were limited to commodity foods and surplus Army ingredients; typical meals would feature commercial foods like hot dogs, Spam, and unpopular cuts of meat such as kidneys and tongue. Potatoes, not rice, were served in the camp cafeteria, and only after prisoners rebelled was rice added to the menu. Some prisoners incorporated Japanese vegetables like burdock and daikon into the camp garden plots. Others hoarded their rice, a treasured Japanese staple, to be fermented into sake or shaped into sushi with hot dogs in lieu of fish. Spam musubi—a block of rice topped with Spam and sealed with a strip of nori—has endured as a signature dish of the Japanese-American experience.

How was sushi adapted to make it appealing to the American palate? 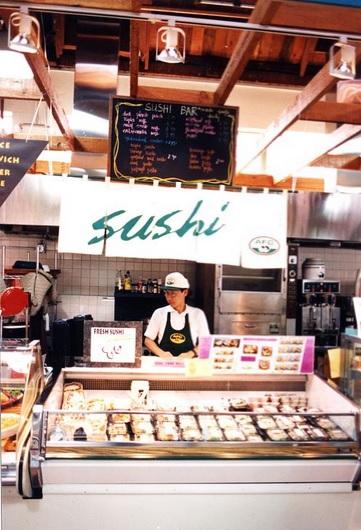 The heavy mid-20th century American diet didn't exactly pave the way for the delicacy of Japanese cooking—sushi for an American audience was going to require some adaptation. The creation of the California Roll by sushi chefs in the Little Tokyo neighborhood of Los Angeles in the mid-1960s ingeniously swapped expensive fatty tuna for a fat slice of ripe avocado. Other chefs hid the unfamiliar dried nori (seaweed) wrapping on the inside of the roll, covering the exterior of the "inside-out" roll with sugar-sweetened rice.

But soon, adventurous American diners declared sushi to be the height of sophistication, and soon sushi became synonymous with celebrities and California tastemakers, popping up in sketches on Saturday Night Live and in films such as The Breakfast Club (1985) and Wall Street (1987). While sushi restaurants were opening by the dozens, in 1996 chef Ryuji Ishii introduced the concept of pre-packaged sushi to American grocery stores, just as it had been available at supermarkets in Japan, and it was in supermarkets that the California roll became a fast favorite nationwide.

What does the government have to do with sushi? 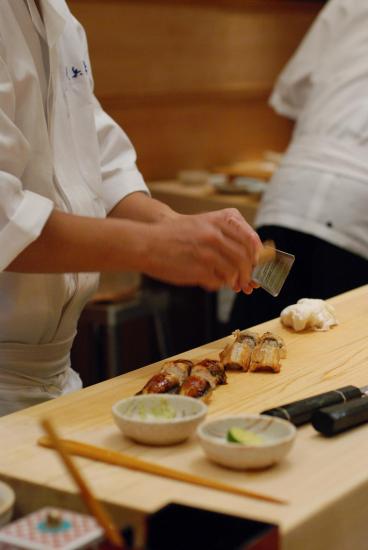 The federal government has standards for verifying the quality of fresh seafood, yet sushi has posed some unique challenges for American lawmakers. In 2014, a proposed California law would have required sushi chefs to wear latex gloves at all times, a rule that would interfere with an expert chef's ability to make subtle texture and temperature adjustments. While that law was overturned after more than 11,000 citizens signed a petition to repeal it, efforts to regulate sushi preparation have not waned.

In January 2015, the New York City Health code received a proposed list of amendments that had, among its suggestions, an adjustment to the way kitchens would prepare fish for crudo, ceviche, and sushi—that kitchens would only use fish that had been frozen ahead of time to ensure that any parasites have been killed off. While many popular fish used for sushi are already frozen before preparation, delicate fish such as Spanish mackerel, sea trout, sea bream, and fluke might have their texture and flavor damaged under deep freezing.

Several health departments across the United States also require sushi rice to be served at 41 degrees or colder, due to concerns that rice kept at room temperature can develop bacteria. Even though most chefs cook rice in an acidic vinegar bath to lower the PH enough to keep it safe, traditional chefs serve rice at body temperature. With valid concerns for both safety and tradition, perhaps the only solution is for government regulators to sit down for an omakase sushi experience—a menu that means "to trust," a good guideline for both the safety and quality of your meal.

Where will our sushi be found in the future—will it be wild-caught or farmed… or will it even be fished at all?

As the American appetite has grown, so too has the demand for Bluefin tuna, the most prized and endangered source of sushi fish. The current population of Bluefin tuna in the Pacific Ocean is less than 20% of what it was in 1970. Environmental groups such as the World Wildlife Fund and the National Fisheries Institute are strongly advocating for an outright ban on Bluefin fishing, but this challenge is not limited to Bluefin tuna alone. All-wild caught fish are facing dwindling populations due to a fishing industry that outpaces the ability to repopulate. Additionally, pollution and habitat degradation have affected the health of fish stocks around the world.

Questions of sustainability have challenged sushi chefs to think more broadly about their craft, and some are using tomato, sweet potato, and asparagus instead of fish. But for those that can’t kick the raw fish, programs like Seafood for the Future, NOAA Fish Watch, and the Monterey Bay Aquarium provide ample resources for determining what types of fish can be responsibly consumed.

Jessica Carbone is a project associate in the Division of Work and Industry, Food History Project. You can get tickets for our "Sushi for Sale" After Hours to learn more on Wednesday, May 13, 2015.

Our upcoming American History After Hours event on Wednesday, May 13, is all about the history of sushi in America, a story as much about cultural heritage as it is about culinary trends, traditions, and adaptations for the American palate. While we'll have chef Kaz Okochi of Kaz Sushi Bistro, Foodstory founder Yoko Isassi, and Bonny Wolf of American Food Roots to tell the full sushi story, here is a look at some of the big questions we'll be chewing over as we sample soy sauce, sake, and more.