A taste of wartime rationing in 1940s product cookbooks

The Patrick F. Taylor Foundation Object Project team had a variety of reactions, taste-wise, to the 1930s recipes that we concocted a few months ago. However, we all agreed that the experience was valuable in another way: it highlighted some facets of 1930s life that we may not have appreciated otherwise. So, for the sake of truly experiencing and learning from primary sources like historical cookbooks, we forged ahead and made 1940s recipes selected from our Archives Center's Product Cookbooks Collection. 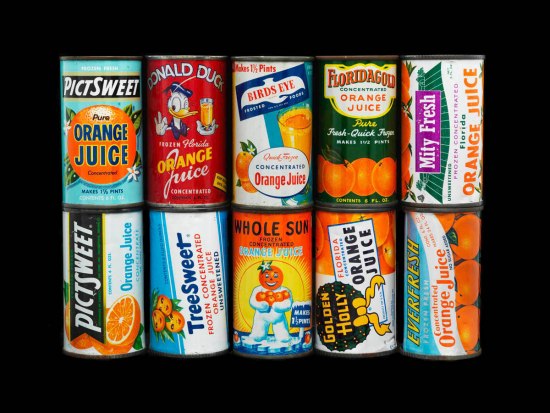 The Taylor Foundation Object Project, a new learning space at the museum, invites visitors to explore innovations from the past that are still with us today. One of those innovations is nationally branded foods. Many food manufacturers produced cookbooks filled with recipes designed to boost sales by including their own products in the list of ingredients. These cookbooks help us get a taste of cooking—and life—in the past.

While making our 1930s recipes, the Taylor Foundation Object Project team experienced how home cooks during the Great Depression made economical use of ingredients and creatively repurposed leftovers. When we took it upon ourselves to try our hands at recipes from 1940s product cookbooks, we experienced a different kind of limitation: World War II rationing. 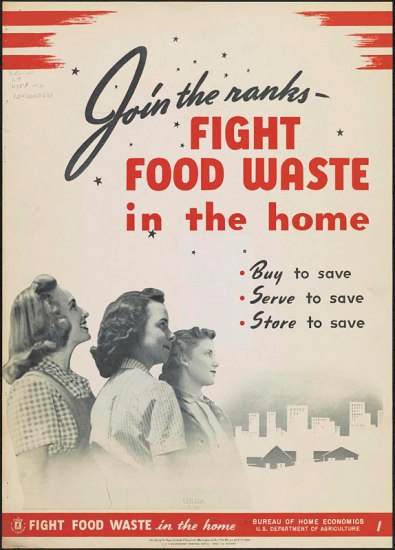 In 1942 the U.S. government began rationing gasoline and sugar. The next year fresh meat, butter, cheese, and canned goods were rationed as well. Every month households received a limited number of ration stamps with point values for fresh and canned foods. Stamps had to be redeemed with each food purchase. Even with rationing, however, foods were in short supply. Unexpected fluctuations in availability meant that 1940s cooks had to plan their meals carefully, and well in advance. 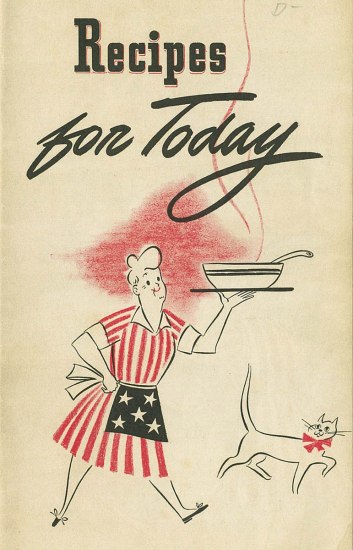 General Foods Corporation's Recipes for Today, published in 1943, takes an enthusiastic, patriotic tone in describing creative fixes and substitutions for rationed ingredients. The section "Cheer for Lunch Boxes" declares that "war-working lunches must offer good square meals." An illustration in that chapter shows the same jolly woman from the cover dressed in red, white, and blue. This time, she's bustling around with the essentials of a recommended working lunch, including a thermos, sandwiches, and a piece of fruit. 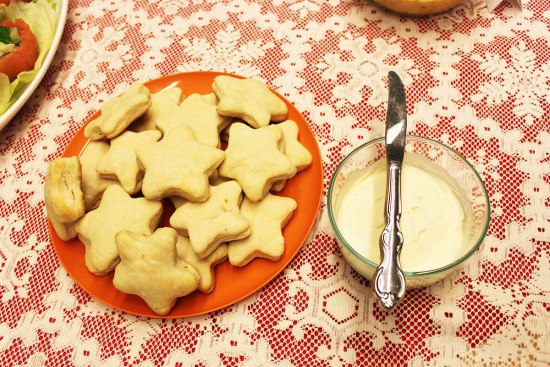 Taylor Foundation Object Project team member Allison made Butter-Saver Spread, one of the "useful sandwich spreads" from Recipes for Today. The recipe begins with butter or margarine and then incorporates milk, salt, and gelatin to stretch the original ingredient further. The team's general consensus was that, though the butter-saver was lighter in color, it tasted pretty much like butter. In fact, it seemed easier to spread. We sampled it on biscuits from the same recipe book, in the chapter "Quick breads A'plenty," which encourages home cooks to make bread at home: "Hurray! There's no shortage here. Cereals and breads are to be our stand-bys. . . . They offer one of the world's best ways to pad out slim pickin's."

Two dishes from Recipes for Today had us encountering cereal in unexpected places, by 2016 standards: in Baked Fish Molds and Cheese Potato Puffs. Both recipes use Post Toasties, a type of corn flakes, which seemed to provide texture and make for a more filling meal. General Foods recommends the use of its cereal brands, such as Post Toasties and Grape-Nuts, to "meet or surpass the whole grain values recommended by the National Nutrition Program."

We noticed that the chipper tone of these ration cookbooks reassures home cooks that they can make tasty meals with limited ingredients. They also comment on nutrition, likely another point of concern for 1940s cooks with shortened grocery lists. Knox Wartime Recipes: How to be Easy on Your Ration Book describes Tomato Jelly as a "Vitamin-rich Lunch Treat!" and the dessert Sponge Pudding as "Children's Delight . . . Rich in Milk!" Both recipes offer a number of variations, so that these dishes could be made more than once without seeming stale, and to encourage home chefs to make use of the ingredients on hand. 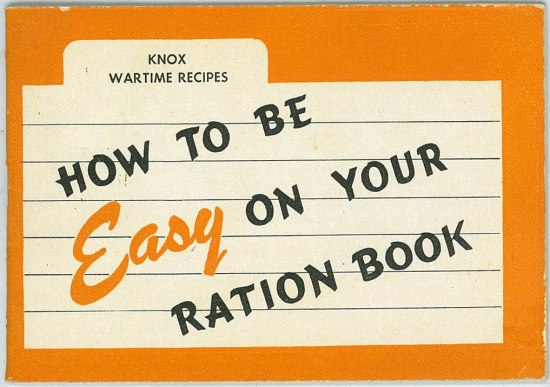 Like Recipes for Today, How to be Easy on Your Ration Book has an upbeat, encouraging tone. It portrays rationing as an important act that every American can do to conserve food and support the war effort, rather than dwelling on the restrictions of rationed foods. In a list titled "Why should I buy KNOX Gelatine," the recipe book celebrates the ingredient as affordable and healthy: "KNOX helps stretch rationed foods into delicious, nourishing dishes your family will thoroughly enjoy."

For the most part, ingredients found in these ration cookbook recipes were simple, and seasonings were sparse. Getting just a small taste of 1940s life through cooking, we appreciated the limitations home cooks must have encountered. But where they lacked certain ingredients, it seems that they made up for it in creativity and good humor.

Caitlin Kearney is a New Media assistant for the Taylor Foundation Object Project. She has also blogged about mid-century cooking. 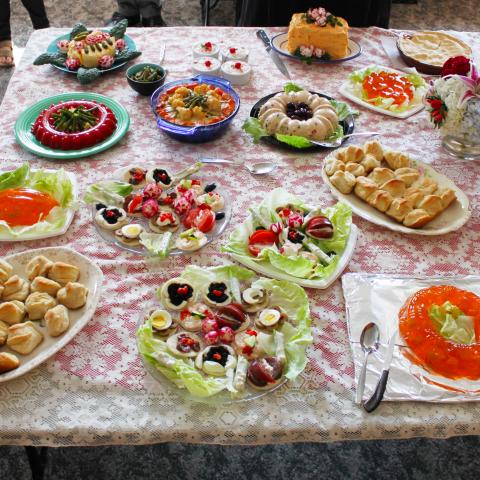