In May 1848, a boisterous man named Sam Brannan charged down a San Francisco street, hollering, "Gold! Gold! Gold on the American River!" and, as the story goes, started the California Gold Rush. The images of saloons, miners, and dusty ghost towns are easy to call to mind, but do you ever wonder what happened to the millions of ounces of gold harvested from the ground? Most of the gold, typically panned out in the form of gold dust, was melted and served as a part of the global supply of gold today. Few samples of gold in its natural form of dust, ore, or nuggets were preserved and traceable back to these historic gold rushes. Only a small handful of coins and ingots minted by private companies or the U.S. assay office survive to provide a glimpse at the life and times of these pioneers of yore. Here are three surviving private gold coins from Oregon, Colorado, and Utah in our collection that are extremely rare. 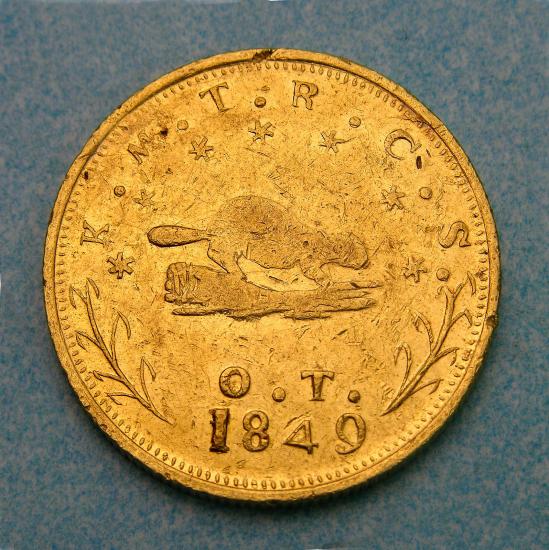 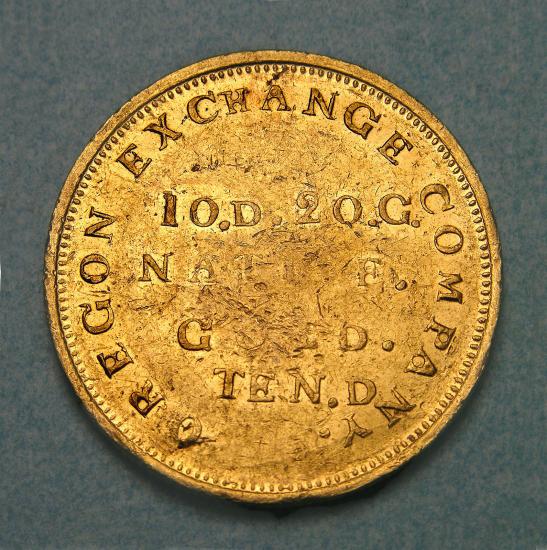 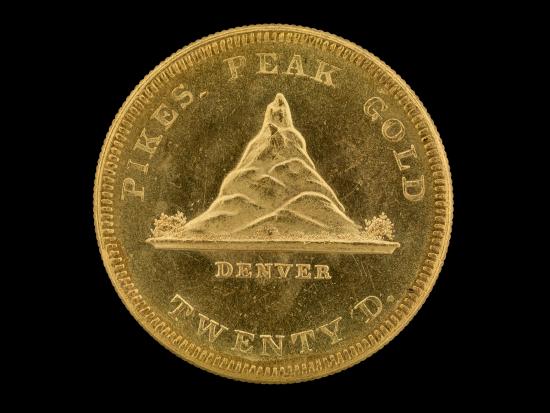 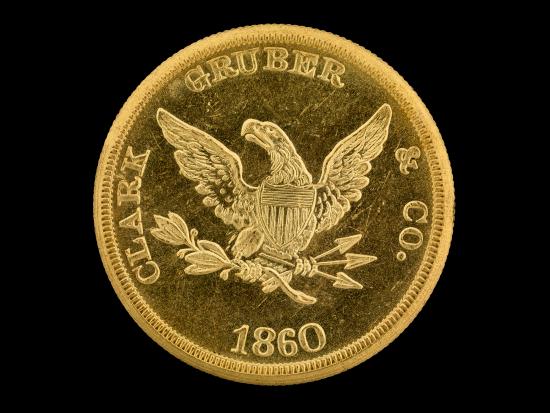 So what was life like during the wild days of the Gold Rush? It is hard for us to relate to this period, in our present era of credit cards and ATMs, but it was a time marked by severe monetary difficulties. Prior to the Gold Rush, coins of any denomination were scarce and the entire frontier operated for the most part as a barter economy.

Various objects later gained wide acceptance as a currency of sorts, such as wheat and beaver pelts in Oregon and cowhides in California. In fact, settlers in these sparsely populated regions were so desperate to find a medium of exchange that in 1845, the provisional government of the Oregon Territory authorized commodities such as butter, peas, and lumber as legal tender. 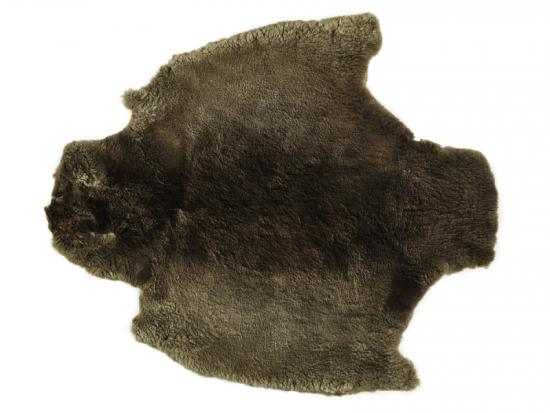 Shortly after gold was discovered, millions of dollars' worth of gold dust spread across California and adjacent territories of Oregon and Utah. But this didn't end the currency crisis. Difficulties arose relating to weighing gold and disagreements over its valuation. A variety of abuses occurred: traders rigged scales with faulty weight; miners diluted their pouches of gold with sand or brass filings; and, most amusingly, saloonkeepers (who sold drinks in exchange for a "pinch" of gold dust) hired men with unusually large hands to grab a larger "pinch."

All of this inevitably led to a public outcry for coined gold with standard defined values. From August 1848 through April 1852, many petitions were sent to Congress by irate merchants demanding the establishment of a mint in San Francisco, as minted coins from the Philadelphia mint and branch mints (satellite mints in New Orleans, Dahlonega, and Charlotte) required considerable expense to ship west and often remained in their respective regions to circulate. But until July 1852, these cries weren't heard by a predominantly eastern-minded Congress that seemed remote from western concerns. As a result, several private companies exploited the opportunity to fill the void by setting up businesses to coin gold either as a public service or for profit. 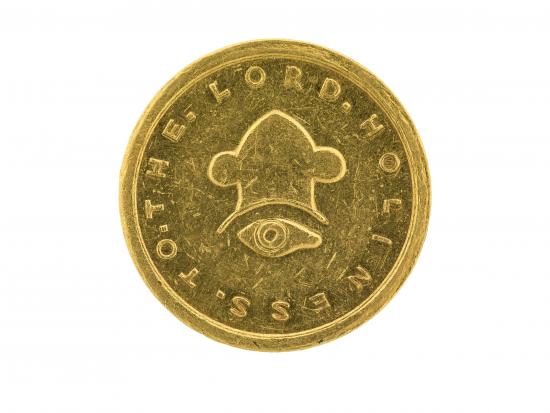 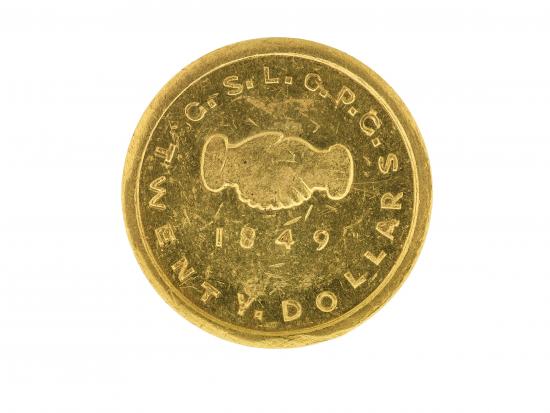 The rise of private mints all over the west made more coins available. On December 1848, Brigham Young and several other Mormon leaders established a mint of their own in Utah, striking gold coins with Mormon imagery on both sides to facilitate trade within the Mormon community and with non-Mormon merchants who supplied goods to them. By March 1849 in Oregon, several businessmen established a short-lived mint in Oregon City to satisfy their local needs. Two months later the first known examples of private gold coins were struck in California. Multiple firms competed fiercely for the business and public confidence of their respective coins, with the firm Moffat & Co. being the most successful in the end. Ten years later during another gold rush in Pike's Peak, the company Clark, Gruber & Co. set up business in Denver, Colorado, to resolve identical abuses relating to gold dust circulation in the state.

One key issue these private mints faced during their years of operation was that the value of their coins was often questioned. Acceptance of these coins was based on the reputation of the company that made them and their true melt value relative to their face value. Business owners and consumers had to figure out which company's coins were of good value and which were fraudulently debased. Firms had to balance profitability with integrity. For example, a dishonest company has a strong incentive to increase profit by using $3 worth of gold to make a coin that passes off with a $5 face value rather than using close to $5 of gold for a $5 coin and only charging a nominal service fee.

Despite this, the desperate shortage of federal coins in the west forced many to accept this temporary measure, and local minters served the needs of the community until enough federal coinage went into circulation to render these private issues obsolete. When that occurred in the late 1850s for the West Coast and the late 1860s for Colorado, nearly all of these private-issue coins went into the melting pot at the various U.S. Mints and assay offices (offices created for the express purpose to evaluate and buy gold from the public to be sent to the mint to be coined). Today only a few choice examples of each type of private issue exist. Luckily, some were saved for preservation in the U.S. Mint's collection of coins (officially known as the Mint Cabinet) thanks to the remarkable insight by William DuBois and Jacob Eckfeldt, mint assayers between the years of 1849 and 1861. 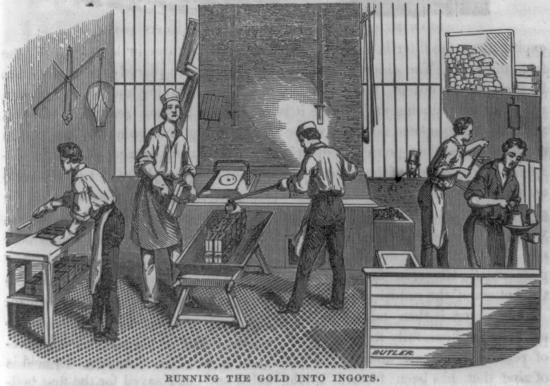 These three coins ended up in the Smithsonian in 1923 when the U.S. Mint transferred its Cabinet Collection to Washington, D.C. With fewer than 30 known for each issue and ranking among the finest specimens known, these three Great American Rarities have come back out of the vaults and today sit proudly on display in the Value of Money exhibition, carrying with them the stories of some of the most fascinating periods in American history.

Benjamin Wu is an intern in the National Numismatic Collection, National Museum of American History.