Where is the missing piece of lining in this U.S. Navy nurse's cape?

"The early morning whistles blew, the water craft sounded their signals in passing, an auto truck went thumping by, and the sun shot into the room under the lowered blind with a red and dazzling light. It fell on the blue and crimson folds of a cloak hanging over the rocking chair—Somebody's Red Cross cape."

These sentences are the beginning of "She's In the Navy Now" a short essay in the American Journal of Nursing. It describes a nameless "Miss Somebody's" average day in the Navy Nurse Corps during the First World War. The fact that the first thing the sun touches in this nurse's room is her Red Cross cape is telling.

For World War I American nurses of the Army Nurse Corps, Red Cross, and Navy Nurse Corps, their capes became what one historian described as "beloved symbols of an ideal of pure altruism." The image of a nurse, cape blowing in the wind or flung over a shoulder to show off its red lining, peppered recruiting posters. 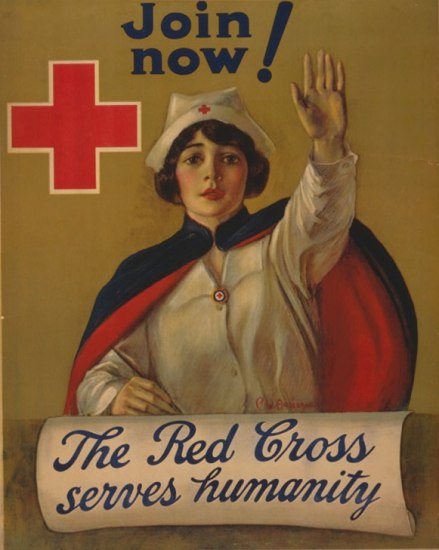 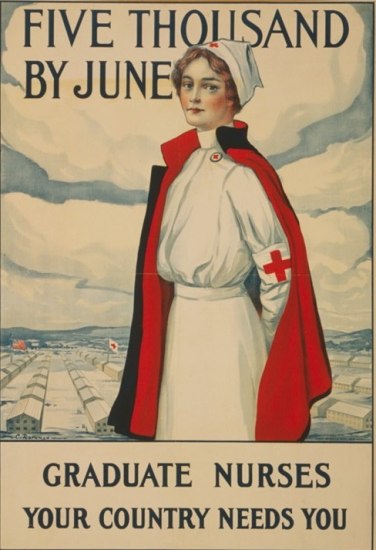 Capes have long been important elements of nursing uniforms. Nurses serving with Florence Nightingale in the Crimean War in the 1850s sported short woolen cloaks. The American Red Cross Nursing Service included a cape as part of its first uniform, drawn up shortly after the service was established in 1909. The Red Cross played a crucial recruiting role for the Navy and Army Nurse Corps, both before and during U.S. involvement in World War I. Part of the Red Cross work included providing the capes that became part of the uniform for both Navy and Army Nurse Corps by World War I.

We knew that we wanted to include a nursing cape, such an iconic symbol, in the section on women's military medical roles in our exhibition Modern Medicine and the Great War. The museum has no shortage of these beautiful objects, but we chose to display the cape below. 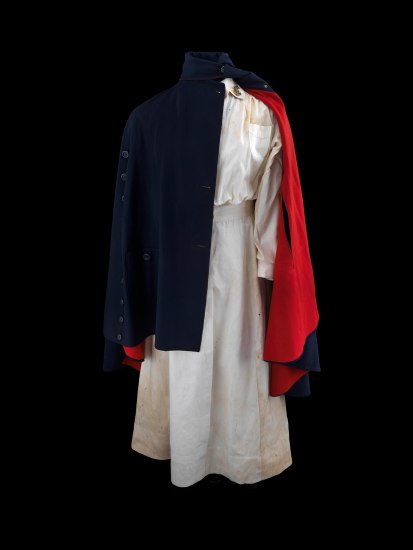 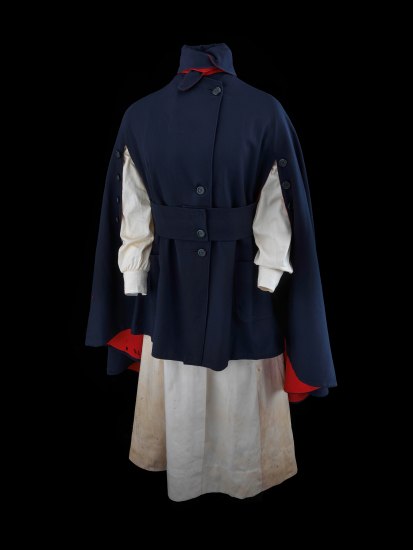 This cape belonged to Sara Matilda Cox, a navy nurse with a long and distinguished military career. Born in Grand Lake, New Brunswick, Canada, Cox made her way to the U.S. by 1890. In 1898, around the time of the Spanish-American War, she served as an army nurse. This early military nursing experience likely played a role in her selection to be part of the first group of women to join the navy. In 1908 Cox and nineteen fellow nurses became the first cohort of the Navy Nurse Corps, earning them the nickname "the Sacred Twenty." 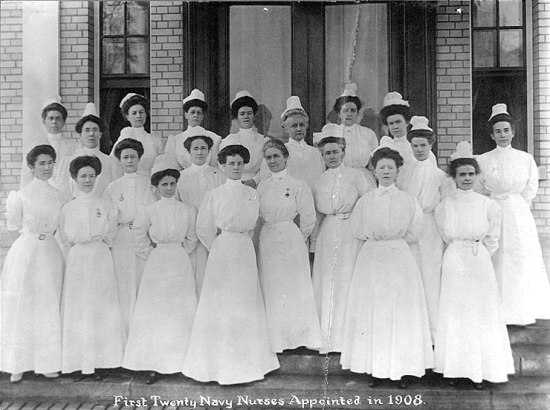 During World War I, Cox served as a chief nurse stationed in New York from January 1914 to February 1916 and in Washington, D.C., between February 1916 and August 1921. Her service during the war eventually helped her become an American citizen. In 1920, after residing in the U.S. for more than 30 years, she applied for naturalization through a process established to expedite the path to citizenship for veterans. She retired from the Navy Nurse Corps in July 1928.

In May 1921 Cox's cape arrived at the museum, part of a larger donation of women's uniforms from World War I service, both military and civilian. It was not until recently, however, that we discovered a part of the cloak was missing. In discussions on how to display the cape, we knew we wanted to show off the lining, mounting the uniform with one side thrown over the shoulder in a blaze of scarlet. When our costume conservator, Sunae Park Evans, began treating the cape, she noticed the lining was missing a large triangle of red. It was cut right along the seams in what appears to be a deliberate manner. 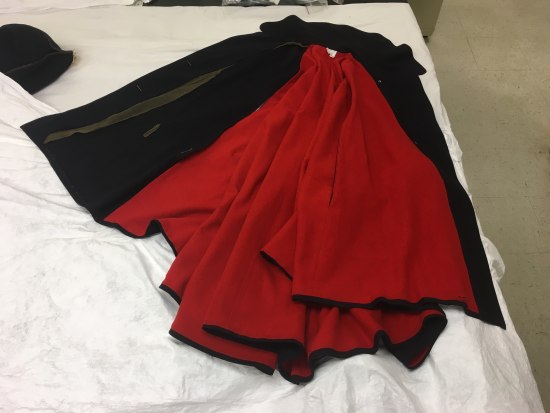 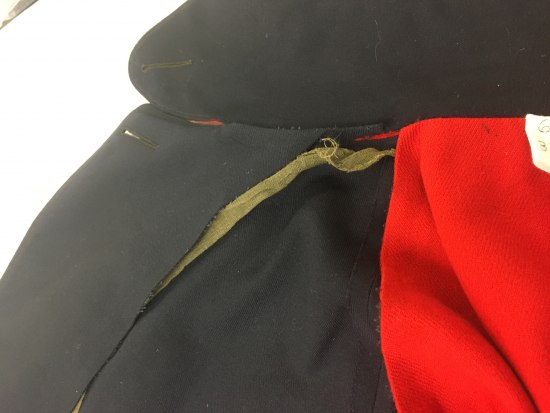 We can't know for sure, but Evans suggested that Cox may have removed the triangle as a souvenir before donating the cloak. Perhaps she wanted a memento of her long career, feeling as Army Nurse Maude Frances Essig did when writing in her wartime diary: "It broke my heart to turn in my precious cape. . . . History was all wrapped up in that cape. . . . Never a day that it had not been on duty with me—my faithful friend."

We may never know where the missing lining of Cox's cape ended up. Cox herself rests among her fellow veterans in Arlington National Cemetery, where she was buried upon her death in 1943. 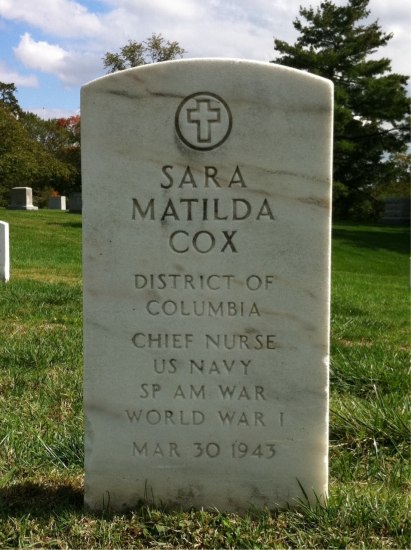 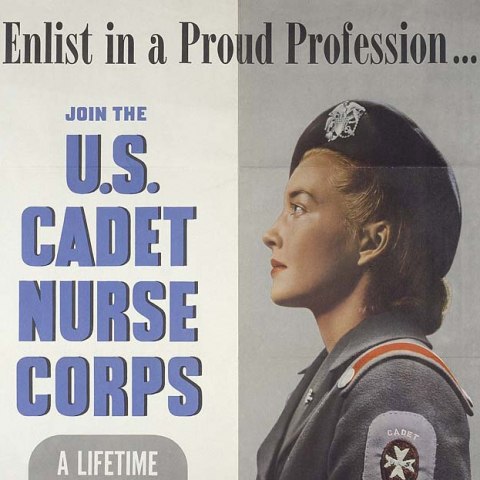