Wheelwoman "Louise" rolls into the museum

The year is 1895. Louise Gibson and her bicycle, Sylvia, are at the forefront of the bicycle craze sweeping America in the late 19th century. Louise has just ridden in from the recently established railroad town of Takoma Park to visit the nation's capital and the Smithsonian Institution on the National Mall for the day. To Louise, the bicycle boom represents new opportunities for women like herself. 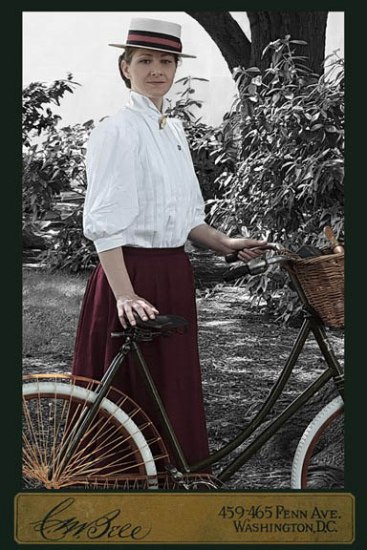 Our very own Wheelwoman character "Louise" was created for the Patrick F. Taylor Foundation Object Project, a new interactive learning space that features a section on the history of cycling in America, and through the generous support of the Smithsonian Women's Committee. Louise is portrayed by actor Julie Garner, who has formerly played another role at the museum as Mary Pickersgill, the real-life seamstress who sewed The Star-Spangled Banner. Louise rides around the museum on an antique 1898 Reliance Model D bicycle, speaking with visitors about her independent journey to Washington, D.C., and the freedom she feels after learning how to ride the bicycle. 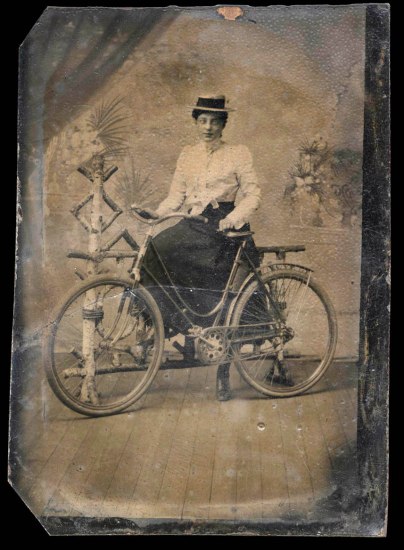 The Wheelwoman character does not represent a specific historical figure; rather, she is an everyday 1890s woman who has learned how to ride a bicycle and is going out on her own for the first time. Unlike the high wheel bicycle, which had one large wheel in the front and a small wheel in the back, the groundbreaking safety bicycle she rides has two wheels of equal size and a drop frame that accommodates a woman's full skirt. Before the 1890s, the bicycle was a dangerous toy for aristocrats and adventurers. With the invention of the safety, everyone could ride, leading Susan B. Anthony to christen it the "freedom machine." 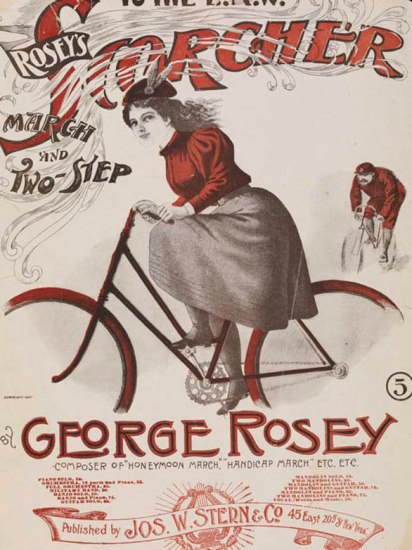 When developing the Wheelwoman character, we hoped to demonstrate to visitors how important the bicycle was in fostering a greater sense of independence for women. Our character's story begins when Louise and her husband, a railway man, move to Takoma Park from an urban area, leaving Louise in need of transportation. Not willing to keep a horse, her husband buys her a bicycle, which she uses to travel freely wherever she pleases. By the late 19th century, the bicycle became a symbol of this newfound freedom and innovation, one that allowed women like Louise to leave their homes and demonstrate their independence and self-sufficiency.

At the age of 35 and with two children, Louise embodies the women who embraced self-discovery and wondered about a woman's place in the modern world. A new sense of freedom and time to devote to oneself allowed women to start contemplating issues such as temperance, child labor, and woman suffrage. If a woman like Louise could ride a machine all on her own across the country, the possibilities were endless for what else she could do! 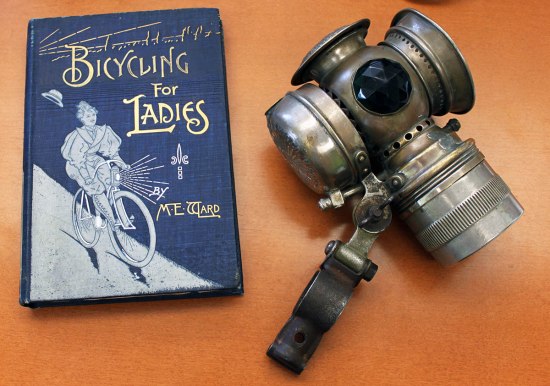 We drew inspiration for Louise from her contemporaries such as Annie Londonderry, who in January 1895 had just begun her cross-country bicycle tour; Frances Willard, a leader of the Women’s Christian Temperance Union and author of A Wheel Within a Wheel: How I Learned to Ride the Bicycle; Maria E. Ward, who wrote guides such as Bicycling for Ladies. These women taught not only about etiquette and technique when riding a bicycle, but also about the health benefits one would receive and the importance of knowing how the machine works. Their texts helped us create the Wheelwoman character to form the basis of Louise's bicycling knowledge. 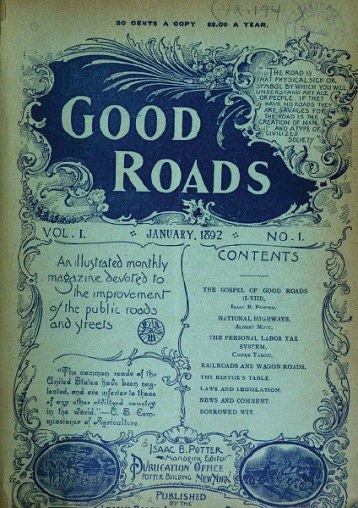 Louise subscribed to the principles of the League of American Wheelmen (L.A.W.), the premiere national bicycle club, which established the Good Roads Movement. As bicycle clubs began to emerge throughout the country, small outings turned into large social tours, closing the distance between cities and towns. In order to travel these distances, country roads needed to be smoothed, and the Good Roads Movement hoped to push the government to improve infrastructure in rural areas. After researching the importance of the bicycle in literally paving the way for the automobile and forming the beginning of our modern road system, we realized that the roads would have had a big impact on Louise's six-mile journey from Takoma Park to Washington, D.C. Louise discusses the importance of the Good Roads Movement with visitors, since she was not able to enjoy the smooth paved surfaces we have today! 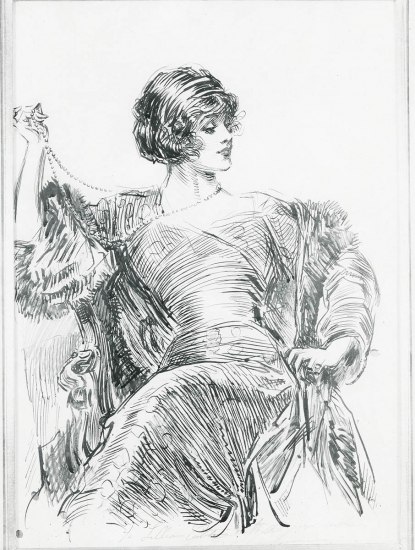 The program development team (which included educators, curators, the actor who would become Louise, and interns like me) hoped to allude to a special historic meaning when searching for a name for the Wheelwoman. Her surname "Gibson" references artistic personification of the ideal woman of her time, the "Gibson Girl." The Gibson Girl was popularized by illustrator Charles Dana Gibson and was meant to portray the ideal of feminine beauty. She was a tall and slender, yet curvy, woman dressed in the latest fashions, who was athletic, confident, independent, and focused on self-fulfillment. She could enter the workforce or attend college to find a mate, but she was not the type to participate in radical movements such as woman suffrage. 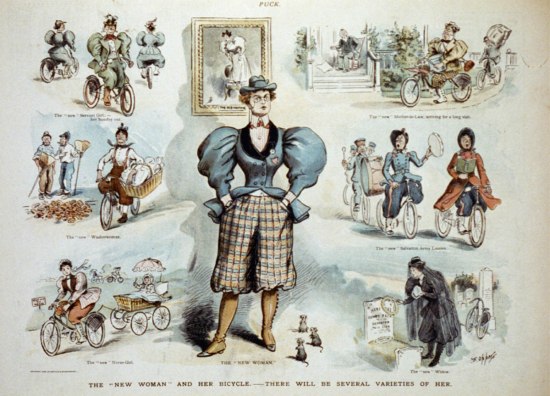 To some degree, the Gibson Girl provides a contrast to the New Woman, a feminist ideal popularized by American writer Henry James. This modern persona represented the educated, independent career woman who advocated for issues such as women's rights. Louise is a composite of these two types. She is a woman who is still concerned with traditional feminine responsibilities but is also exploring new possible roles for women through her bicycle. 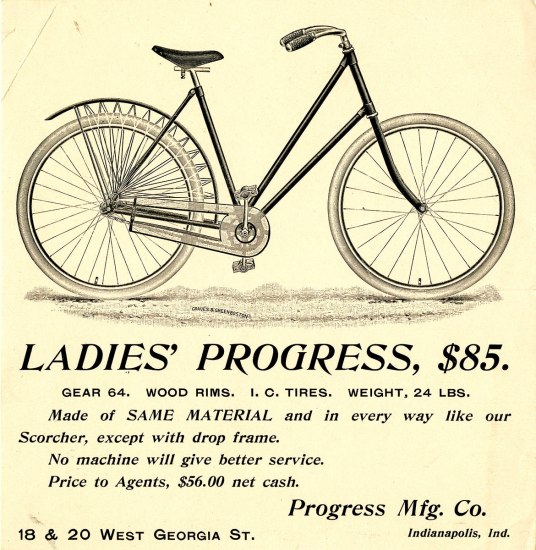 Louise still wears a corset, but it is a sport corset with elastic, designed for comfort during exercise; she is even considering purchasing bloomers to replace her long skirts. The Rational Dress Movement was formed in the late 1800s to reform the Victorian-era dress in favor of more practical and comfortable clothes for women. As women began to engage in physical activities such as bicycling, the large and heavy skirts of the Victorian era became increasingly impractical. For now, Louise is equipped with a skirt lifter to separate her skirts and a skirt guard to make sure that her clothes do not get caught in the wheel.

After hours of role-playing and modifying the character with our actor, the Wheelwoman made her debut on the floors of the museum at the July opening of our new Innovation Wing. Look for her on your next visit. You can also explore bicycling history in our online exhibition and learn about the conservation of a very fancy bike.

Brianna Mayer was a summer 2015 intern with the Office of Public Programs and Strategic Initiatives. She is a studying history and anthropology at the University of Michigan. 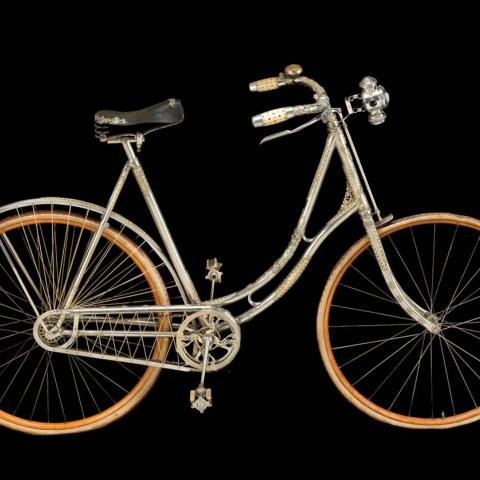