The museum will recognize the life and legacy of Prince Rogers Nelson (1958–2016) by displaying his "Yellow Cloud" electric guitar. The guitar goes on special display Tuesday, April 26. You'll be able to see it through Labor Day, September 5, 2016. Prince designed the guitar, which was made in 1989 by the Minneapolis, Minnesota, firm of Knut-Koupee Enterprises. He played it during the Diamonds and Pearls era.

While sitting in an afternoon meeting on April 21, phones around me started buzzing simultaneously with the shocking, sad news that pop music icon Prince had suddenly passed away in his home state of Minnesota. Only 57 years old, Prince was one of those celebrities who seemed ageless; I thought he'd be around for decades (and dreamt of seeing him live in concert). 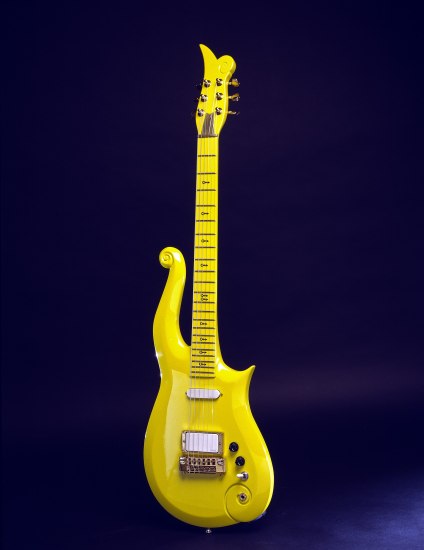 Today I envision him as I first saw him on MTV in 1984, mesmerizing teens like me with his sexy, cool vibe while playing a hot electric guitar. Little did I know that, about a decade later, I would have the opportunity to hold his Yellow Cloud guitar in my hands. Only one year into my employment at the National Museum of American History's Lemelson Center for the Study of Invention and Innovation, I had the amazing opportunity to co-curate an exhibition about the invention of the electric guitar. Alas, I never got to meet Prince, but of course we featured his guitar in our exhibition, representing one of the greatest players (ranked #33 out of 100 by Rolling Stone just four months ago) as well as showing off the instrument's innovative design. According to Rolling Stone, jazz legend Miles Davis dubbed Prince a combination of James Brown, Jimi Hendrix, and Marvin Gaye, while Prince gave a nod to guitarist Santana as another key influence.

The world rightly mourns this extraordinary guitarist, singer, artist, performer . . . and now legend for the ages. As he sings in "When Doves Cry," "Don't cry. Darling, don't cry."

Monica Smith is head of exhibitions and interpretation for the museum's Lemelson Center for the Study of Invention and Innovation and the project director for Places of Invention. She has also blogged about why Nashville became Music City.