When Irish American eyes are smilin'

In honor of St. Patrick's Day, staff members have selected four objects that reveal facets of the Irish American experience.

Dan Gifford, Office of External Affairs:
In the early 1900s, holiday postcards became a popular way of sending greetings for a variety of occasions, including St. Patrick's Day. However, the images on these postcards also became a source of cultural conflict. Postcard firms produced a variety of St. Patrick's Day lines, many of which tapped into unflattering stereotypes of the Irish as drinkers, fighters, or simple country bumpkins.

Rather than acquiesce to unflattering stereotypes (as African Americans were often forced to do), Irish Americans demanded that postcard companies remove the offending lines from their annual offerings. Newspapers between 1909 and 1911 detail protests, boycotts, and calls for the police to confiscate the "indecent literature." 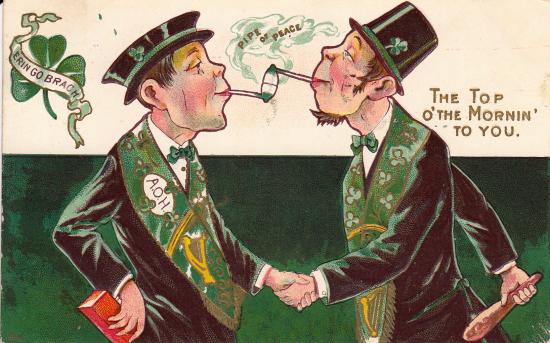 The controversy disappeared as the craze for sending postcards waned, but the episode is illuminating. It is a reminder that holidays help to shape and reaffirm identity, and foster a sense of belonging and inclusion. When that identity and desire to belong is threatened, both individuals and groups often use whatever power and resources they have at their disposal to push back.

Tim Winkle, Division of Home and Community Life:
When the Hibernia Fire Company of Philadelphia acquired its first steam-powered fire engine in 1858, members took the apparatus on tour of cities up and down the East Coast, proudly wearing their full uniforms, including hats like this one. 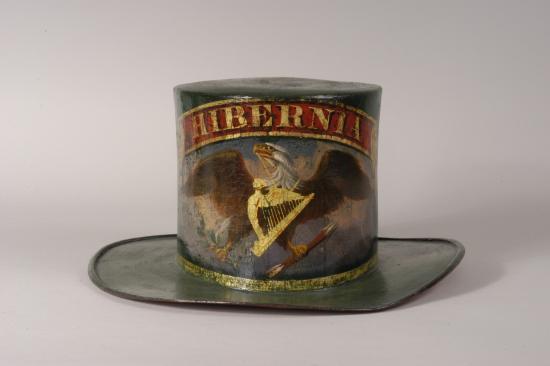 In New York, they were welcomed with an illuminated nighttime parade. While the procession was being prepared, onlookers gathered to take in the Hibernians and their new-fangled machine. In the company’s own published account of the event, it was noted that "a great many natives of the 'ould sod' were among the crowd, and on their countenance a shade of disappointment seemed to linger, the solution of which may be found in the following remark uttered by a bystander: 'Why, they are not Irish after all.'"

The Hibernian Fire Company was certainly Irish, or at least began that way. It was founded by Protestant Irish emigrants more than one hundred years earlier, in 1751. Their symbol of the American eagle with the Irish harp around its necks speaks to the dual identities of these fire fighters, but from the start, the Hibernians wore their allegiance to the American colonies proudly.

In addition to fighting fires, the volunteer fire company was one of seven in Philadelphia that publicly pledged to support nonimportation of British goods in favor of American manufacture in the face of taxes. Many members of the Hibernia Fire Company were also present at the founding of the First Troop Philadelphia City Cavalry, the first military unit organized in defense of the colonies, following the inaugural meeting of the First Continental Congress in the autumn of 1774.

Eric Jentsch, Division of Culture and the Arts:
By participating in sports, Irish immigrants found opportunities to support themselves, excel individually, and represent their communities in the United States in the 19th century. During this era, the Irish were one of the nation's largest immigrant groups, and as such suffered hardships common to many incoming communities. Sports offered a way for many to participate and find representation in the larger national culture.

However, as illustrated by this embroidered boxing belt from era, participation did not mean a rejection of Irish cultural identity. Included amongst the imagery surrounding the two bare-knuckled fighters represented upon the belt are the Irish national symbols of harps and clovers. Meanwhile, at center, an American flag is featured above the words "United America." In this way, one can see that the Irish of the era saw themselves as both Irish AND American, revealing the complex nature of our shared national identity. 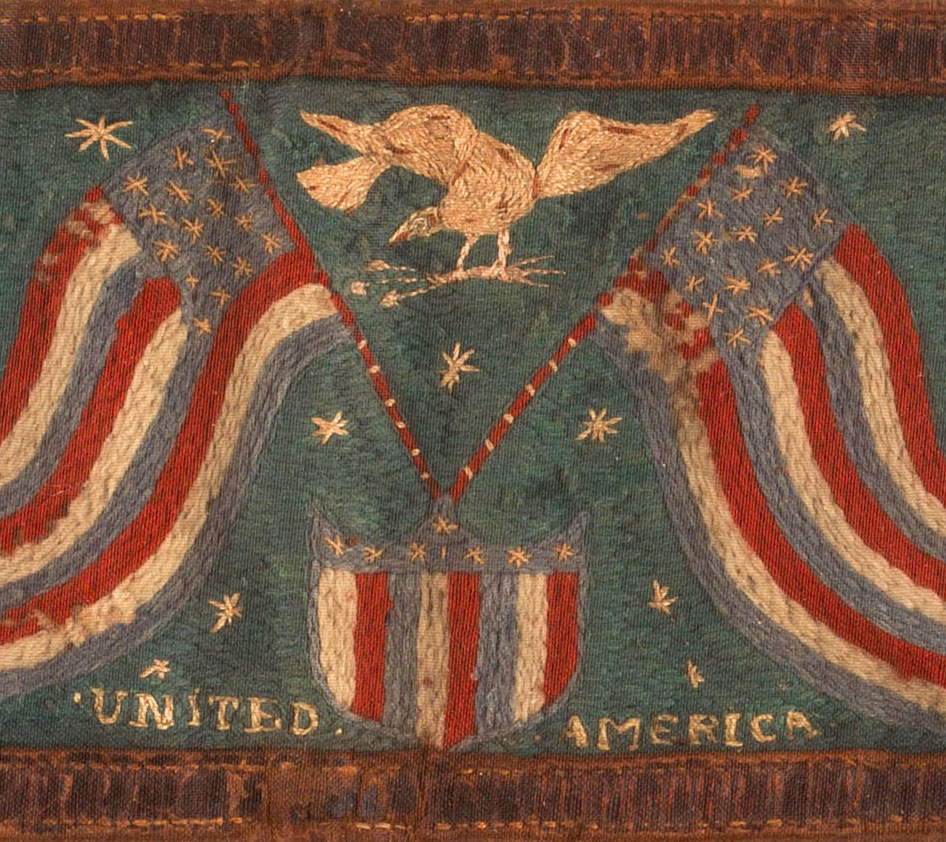 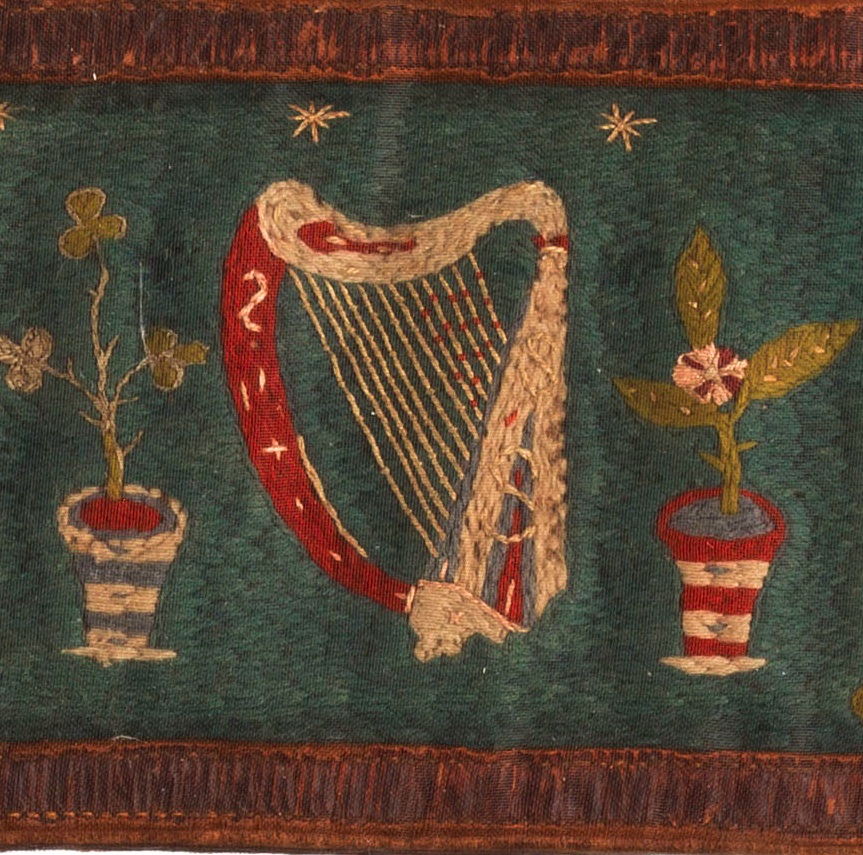 Christy Wallover, Division of Armed Forces History:
At the onset of the Civil War Irish American participation greatly bolstered Union forces. Historians cite numerous reasons for such patriotic fervor: to prove their loyalty to their adopted country, to counteract nativist sentiment, to gain military experience for future wars for Irish independence from Great Britain, and to preserve the Union as a refuge for future Irish immigrants. No matter which cause decided their action, Irish Americans took up arms to protect and defend the United States. 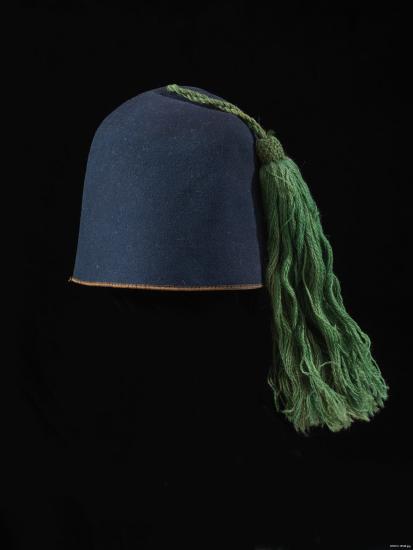 This fez is a part of a uniform of the 164th New York Infantry Regiment. This regiment was a Zouave unit commanded by Brigadier General Michael Corcoran and was a part of the famed Irish Legion (also known as Corcoran’s Legion). The green tassel on the blue felt fez indicated to an uninformed onlooker that this regiment was one of Irish heritage.

By 1863, Irish American attitudes towards the war changed. Huge Irish American death tolls at the Battles of Antietam and Fredericksburg and the impending federal draft had many in the Irish community wondering if they were cannon fodder. The removal of General George B. McClellan soured favorable Union sentiment and Lincoln's Emancipation Proclamation swelled the fear of losing jobs to the freed African American population. All of this culminated in Irish American frustration that boiled over in the New York City Draft Riots in July of 1863. Although mixed feelings prevailed throughout the Irish American community, many still fought to protect the Union.