“If my name ever goes into history it will be for this act, and my whole soul is into it.”

Lincoln’s Order
On September 22, 1862, five days after the Union victory at the Battle of Antietam, Abraham Lincoln issued the preliminary Emancipation Proclamation. He presented the proclamation as a wartime necessity, under his authority as Commander-in-Chief. It ordered that as of January 1, 1863, all enslaved individuals in all areas still in rebellion against the United States “henceforward shall be free,” and under the protection of the military. Those willing to enlist would be received into the armed forces.

The proclamation was limited in scope and revolutionary in impact. The war to preserve the Union also became a war to end slavery. 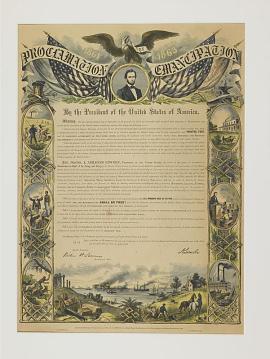 Publishers throughout the North responded to a demand for copies of Lincoln’s proclamation and produced numerous decorative versions including this engraving by R. A. Dimmick in 1864.
National Museum of American History, gift of Ralph E. Becker 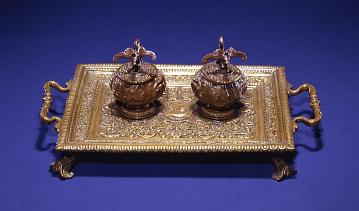 In the summer of 1862, while waiting for the latest news to come into the War Department telegraph office next to the White House, Lincoln began to draft the proclamation using this inkstand. The president sat at the desk of Maj. Thomas T. Eckert, and Lincoln later explained to Eckert that he had been composing a document “giving freedom to the slaves of the South.”
National Museum of American History

Self-Emancipation
For most white Americans, the Civil War was a war for the Union. But for black Americans, it was a battle for freedom. Determined to end slavery, tens of thousands of enslaved African Americans used the war to escape their bondage. As the Union Army drove into the Confederacy, enslaved people stole away and entered Union lines. These thousands of African Americans made their freedom a fact. Within two years, President Lincoln issued the Emancipation Proclamation and made ending slavery government policy.


“Imagine, if you will . . . an army of slaves and fugitives, pushing its way irresistibly toward an army of fighting men. . . . Their arrival among us . . . was like the oncoming of cities.” 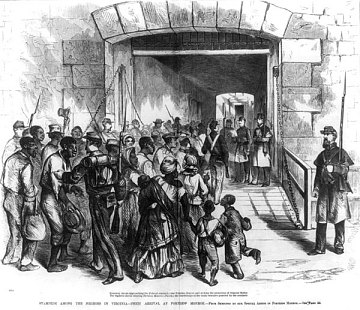 The First “Contrabands”
One month into the Civil War, three men escaped across the mouth of the James River and entered Fort Monroe, Virginia. With this act, Shepard Mallory, Frank Baker, and James Townshend declared themselves free and triggered a national debate over whether the United States had the right to emancipate the enslaved. General Benjamin Butler refused to return the men to slavery and classified them as enemy property or in his words “the contraband of war.” The policy and the nickname stuck. Despite the uncertain status of being classified as “contraband,” thousands of African Americans escaped slavery, forcing the hand of the federal government.

The Front Lines of Freedom
Tent cities sprang up across the South as thousands of enslaved people crossed Union lines and forced the issue of freedom. The people had spoken, using one of the few political tools available to enslaved people—the power of coming together to be heard. The sheer number of African Americans arriving in camps and cities pressured politicians, generals, and the U.S. government to act. Lincoln personally witnessed the growth of the tent cities as he crossed Washington, D.C., each day. 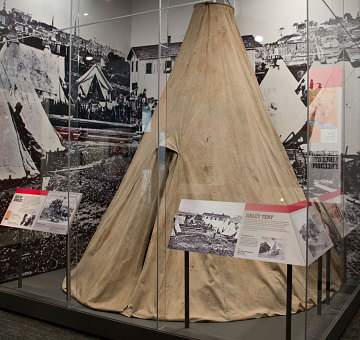 As African Americans walked away from slavery and into Union lines, the U.S. Army found itself fighting a war surrounded by men, women, and children. The self-emancipated forced the army and eventually President Lincoln to resolve their status as people not property. The military provided cast-off tents, like this Sibley tent, for African Americans who reached Union lines. One tent could hold 12 to 20 people.
On loan from Shiloh National Military Park 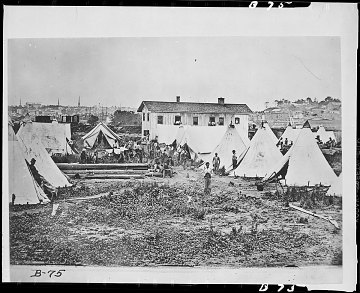 By the first months of war, freed men and women built tent cities or “contraband camps,” sometimes with assistance from the U.S. Army. This photograph taken in 1865 in Richmond, Virginia, shows the widespread use of the Sibley tent to house freed people.
U.S. National Archives and Records Administration 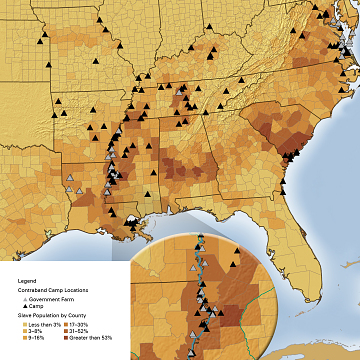 African Americans established makeshift communities as thousands sought freedom. The locations of these camps followed the path of the army’s advance into the Confederacy. A few were established outside of the South to help house black Americans migrating north out of slavery.
National Park Service 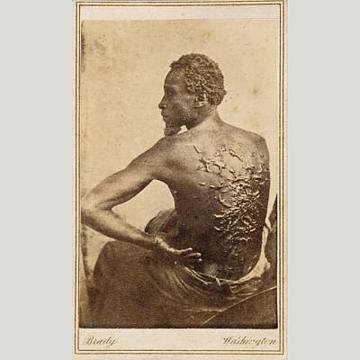 Private Gordon’s scarred back became a powerful symbol of the human cost of slavery during the Civil War. This photograph, taken during Gordon’s U.S. Army medical examination, was widely sold and circulated to support the Union effort and assist fugitives. After being brutally beaten by an overseer, Gordon escaped slavery in March 1863 and enlisted in the U.S. Army in Baton Rouge, Louisiana.
National Portrait Gallery, Smithsonian Institution, NPG.2002.89 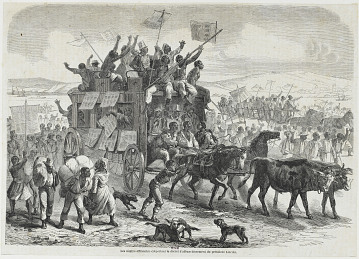 The news of the Emancipation Proclamation was celebrated across Europe and Latin America where, in most countries, emancipation had already occurred. 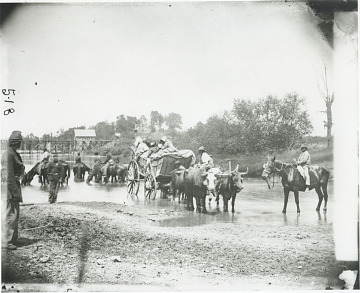 Recognizing an important piece of history, Timothy O’Sullivan photographed African Americans freeing themselves in 1862. This image of people leaving slavery by the wagonful was picked up by many newspapers and became a common way to portray the mass migration.
Library of Congress 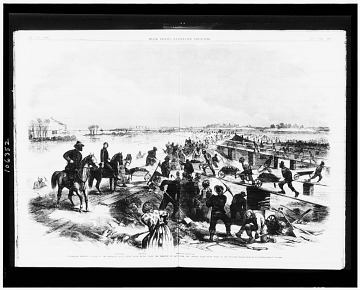 “Contrabands Building a Levee on the Mississippi Below Baton Rouge”

The U.S. Army put African American men, women, and children to work when they came into Union lines. Often the work was difficult and dangerous, especially for those who were malnourished. The death rate soared as generals took the name “contraband” to heart and used freed people to advance the war effort. Word spread, and by late 1862, many African Americans chose to avoid the government camps. 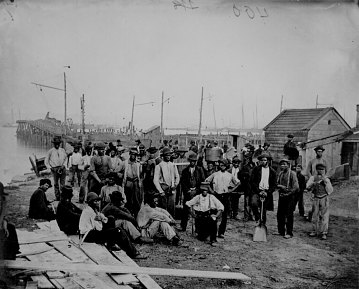 ‹ Lincoln and the Emancipation Proclamation up Day of Jubilee ›