The Impact and Legacy of the Emancipation Proclamation

Freedom’s Promise
The Emancipation Proclamation committed the nation to ending slavery. Yet what would freedom mean? Economic independence? Freedom from fear? The right to vote? The U.S. Congress responded with a series of Constitutional amendments ending slavery, granting citizenship, and giving black men voting rights. These rights changed the political landscape. By 1872, 1,510 African Americans held office in the southern states. Eight black men served together in the U.S. Congress in 1875—a number that would not be matched until 1969.

Thirteenth Amendment
Expansion of Rights
The 13th Amendment abolished slavery in 1865. To protect the rights of newly freed people, Congress enacted two additional Constitutional amendments. The 14th Amendment (1868) guaranteed African Americans citizenship rights and promised that the federal government would enforce “equal protection of the laws.” The 15th Amendment (1870) stated that no one could be denied the right to vote based on “race, color or previous condition of servitude.” These amendments shifted responsibility for protecting rights to the federal government if states failed to do so. 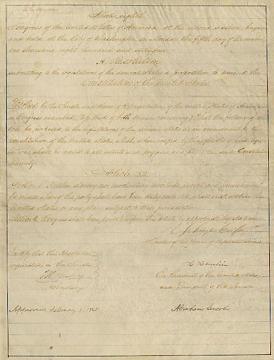 The 13th Amendment completed what tent cities and the Emancipation Proclamation set in motion. On December 6, 1865, the U.S. government abolished slavery by amending the Constitution to state, "Neither slavery nor involuntary servitude, except as a punishment for crime whereof the party shall have been duly convicted, shall exist within the United States, or any place subject to their jurisdiction."

A limited number of signed commemorative copies of the 13th Amendment were produced. Only a handful survive. This signed copy was given to Speaker of the House of Representatives, Schuyler Colfax, a lifelong abolitionist, who was instrumental in pushing the resolution through Congress.
On loan from David Rubenstein 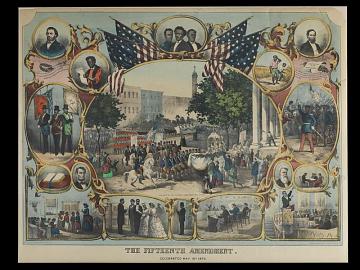 Lithograph Celebrating the Passage of the 15th Amendment, 1870 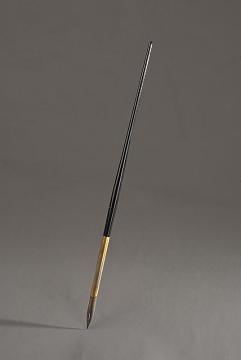 Pen used by Ulysses S. Grant to sign the presidential proclamation of the ratification of the 15th Amendment.
National Museum of American History, gift of Edward H. Preston 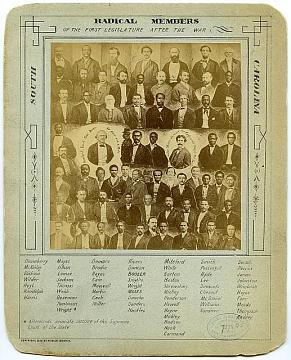 African American men held elective office in every southern state during Reconstruction. Those with the largest numbers of black representatives were South Carolina, Mississippi, Louisiana, Alabama, North Carolina, and Texas.
Library of Congress

Backlash
Freedoms Denied
As soon as the war ended, many whites organized to oppose black freedom. Using terrorism and the courts, they forced African Americans away from voting booths and other public places. By the 1890s, southern states passed laws legally segregating black and white Americans. States excluded black voters by enacting literacy tests, poll taxes, elaborate registration systems, and whites-only Democratic Party primaries. The U.S. Supreme Court upheld these measures. The laws proved very effective. In Mississippi, fewer than 9,000 of the 147,000 voting-age African Americans were registered after 1890. In Louisiana, where more than 130,000 black voters had been registered in 1896, the number had plummeted to 1,342 by 1904.

The fight over civil rights was never just a southern issue. This became especially evident as African Americans moved north and west after the Civil War. The ballot is from the race for governor of Ohio in 1867. Allen Granberry Thurman’s campaign included the promise of barring black citizens from voting. He narrowly lost to future president Rutherford B. Hayes. Thurman was then appointed U.S. Senator for Ohio, where he worked to reverse many Reconstruction-era civil rights reforms.
National Museum of American History, gift of Michael V. DiSalle 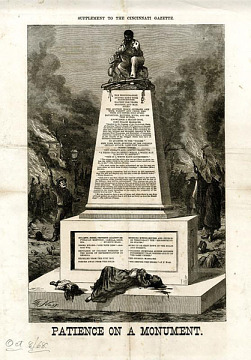 Patience on a Monument

In this political cartoon, Thomas Nast captured the vicious irony that the pinnacle of citizenship did not help African Americans protect themselves or their families.
Thomas Nast, “Patience on a Monument,” Harpers Weekly, October 10, 1868. National Museum of African American History and Culture 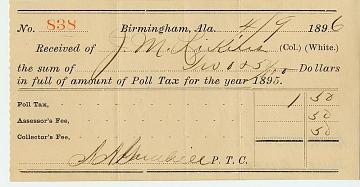 Poll taxes required citizens to pay a fee to register to vote. These fees kept many poor people, black and white, from voting. The poll tax receipt displayed here is from Alabama.
National Museum of American History, gift of Mrs. R. T. Milner 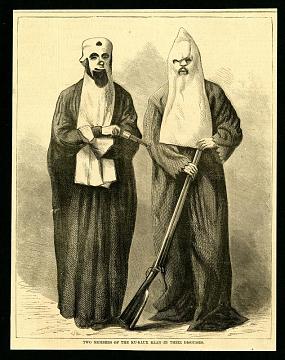 The Ku Klux Klan was founded in Pulaski, Tennessee, in 1866 to combat Reconstruction reforms and intimidate African Americans. By 1870 similar organizations such as the Knights of the White Camellia and the White Brotherhood had sprung up across the South. Through fear, brutality, and murder, these terrorist groups helped to overthrow local governments and restore white supremacy.
National Museum of American History