Lincoln and the Emancipation Proclamation

“In a thousand years that action of yours will make the Angels sing I know it.”

America’s promise of freedom is filled with contradiction. Perhaps no people understood this more than the roughly four million enslaved African Americans living in the United States before 1863. Through their actions, large and small, enslaved people worked toward the moment of freedom for more than 200 years. On January 1, 1863, the United States government responded. Invoking presidential wartime powers, Abraham Lincoln decreed that all persons held in bondage within the Confederacy were free. The Emancipation Proclamation cracked open the institution of slavery, changing the course of the Civil War and the nation.

Lincoln and the Drafting of the Proclamation
By 1862, Abraham Lincoln realized that to restore the Union, slavery must end. Politically, Lincoln faced pressure on all sides: from African Americans fleeing bondage, from Union generals acting independently, from Radical Republicans calling for immediate abolition, and from pro-slavery Unionists who opposed emancipation.

Lincoln also felt constrained by Constitutional limits on the federal government, which protected private property. Striking a balance, he believed the president only had the authority and political support to free enslaved persons residing within the eleven rebel states. In the summer of 1862, he began to draft the Emancipation Proclamation. 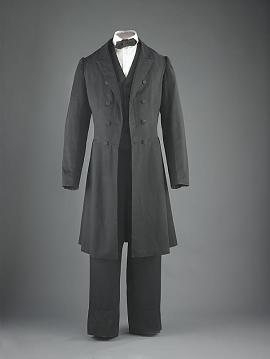 Abraham Lincoln wore the black broadcloth coat, vest, and trousers displayed here as his every day office suit during his presidency. The shirt and tie are reproductions.
National Museum of American History, gift of Mrs. William Hunt

“I am naturally anti-slavery. If slavery is not wrong, nothing is wrong. I cannot remember when I did not so think and feel.”

Lincoln and Slavery
Abraham Lincoln had always opposed slavery, but never sided with abolitionists who called for its immediate end. He sought solutions that would make slavery gradually fade from white society—limit its location, sponsor compensation programs for slave owners, and relocate freed blacks outside the country. The war made these gradual solutions woefully inadequate.

On the advice of his cabinet, Lincoln waited for a Union victory before announcing his decision. Without a victory, they feared the proclamation would only appear as a meaningless act of an embattled government. On September 22, 1862, five days after Union troops defeated Robert E. Lee’s advance at the Battle of Antietam, Lincoln released the proclamation. 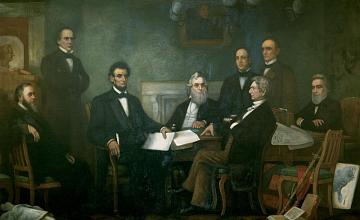 First Reading of the Emancipation Proclamation of President Lincoln

Lincoln viewed the Emancipation Proclamation as his proudest achievement and welcomed opportunities to have his accomplishment celebrated. When Francis Bicknell Carpenter requested permission to create a painting of the president presenting the proclamation to his cabinet, Lincoln invited the artist to live in the White House until he completed the work. The original painting now hangs in the U.S. Capitol.
United States Senate 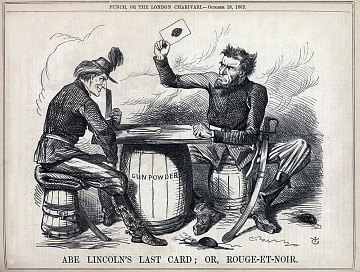 Not everyone shared Lincoln’s views of the proclamation. Some people considered it as a dangerous act of a desperate president willing to foment slave revolts to save his government.  This political cartoon, Abe Lincoln’s Last Card or Rouge-et-Noir, by John Tenniel appeared in Punch magazine, October, 18, 1862, following Lincoln’s announcement of the Emancipation Proclamation.
Chicago History Museum 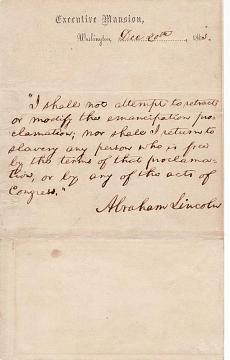 Standing Firm
Lincoln repeatedly assured his critics that he had no intention of rescinding the proclamation. He repeated his commitment to emancipation in this note to Henry C. Wright of the Massachusetts Anti-Slavery Society. In 1864, he would risk his political fortunes and his reelection by throwing his full support behind the 13th Amendment to the Constitution, which abolished slavery.
On loan from Shapell Manuscript Collection 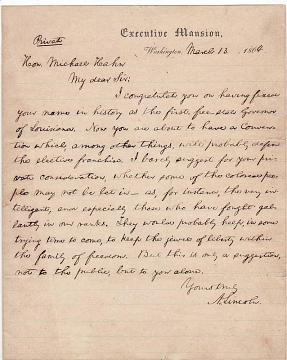 Letter from Lincoln to Governor Hahn

“The Family of Freedom”
Lincoln’s views on how to integrate formerly enslaved people into society evolved throughout his presidency. After Louisiana applied for readmission to the Union, Lincoln wrote to the newly elected governor, Michael Hahn, and raised the subject of extending the vote to some African Americans, especially veterans. “They would probably help, in some trying time to come, to keep the jewel of liberty within the family of freedom.”
On loan from Shapell Manuscript Collection