“Merely contemplating the possibilities for trouble and the logistics of the demonstration has given Washington officialdom its worst case of invasion jitters since the First Battle of Bull Run.”

Southern senators had the bill blocked in Congress when rumors of a planned demonstration in Washington reached the White House. Fearing that a protest would defeat the legislation, Kennedy asked that the march be canceled. Civil rights leaders refused. Unable to stop the march, Kennedy worked to ensure its success by encouraging administration officials to fully cooperate with the march organizers.

A Powder Keg
As the day of the march approached, no one really knew what to expect. Demonstrators across the country finalized their travel plans; others were already on the road. Organizers had hoped for as many as 100,000 participants, but would they come and would their journey be blocked along the way?

The capital braced for the worst. The police department canceled all leave. On military bases around the city, thousands of troops were placed on alert, and Pentagon officials reviewed their plans to send soldiers to the Mall if violence erupted. 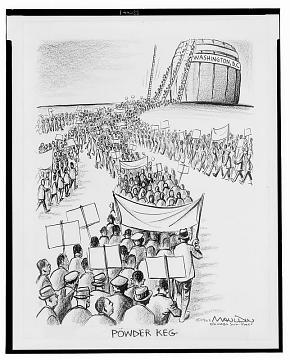 Bill Mauldin's cartoon, published in the Chicago Sun Times, on August 24, 1963, captured the widespread apprehension about the upcoming demonstration.
Library of Congress

‹ Planning the March up March on Washington ›