Legacy and Impact of the March

“That day, for a moment, it almost seemed that we stood on a height, and could see our inheritance; perhaps we could make the kingdom real; perhaps the beloved community would not forever remain the dream one dreamed in agony.”

A Day of Hope
With the words and music still ringing in their ears, the demonstrators boarded buses and trains for their journeys home. Many would return to the same hardships, discrimination, and violence that had prompted them to join the March on Washington. But the legacy of that day endured and increased popular support for the civil rights movement. In the months and years that followed, the march helped sustain and strengthen the work of those who continued to commit themselves to the ongoing struggle for social justice. 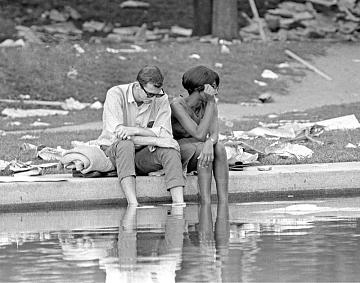 Two demonstrators linger at the Reflecting Pool at the end of the day’s events.

Responses to the March
In the months after the March on Washington, ongoing demonstrations and violence continued to pressure political leaders to act. Following President Kennedy’s assassination on November 22, 1963, President Lyndon Johnson broke through the legislative stalemate in Congress.

The passage of the Civil Rights Act of 1964 and the Voting Rights Act of 1965 were turning points in the struggle for civil rights. Together the two bills outlawed segregated public facilities and prohibited discriminatory practices in employment and voting. 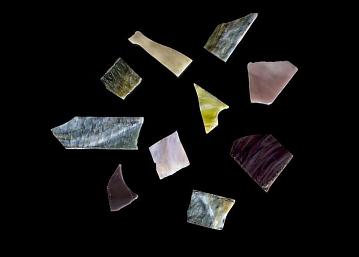 Just two weeks after the march, on September 15, 1963, white supremacists planted a bomb under the steps of the 16th Street Baptist Church in Birmingham, Alabama. The explosion killed four young girls attending Sunday school. This terrorist act was a brutal reminder that the success of the march and the changes it represented would not go unchallenged. In the face of such violence, the determination to continue organizing intensified. These glass shards are from the church’s stained-glass window. Collection of the Smithsonian National Museum of African American History and Culture, Gift from the Trumpauer-Mulholland Collection.

Equality for All
The success of the March on Washington and the achievements of the modern black freedom struggle reverberated throughout society and provided a model for social change. The power of mass nonviolent demonstrations inspired Americans fighting for equal rights and access to opportunities regardless of race, gender, ethnicity, religion, age, sexual orientation, or disabilities. 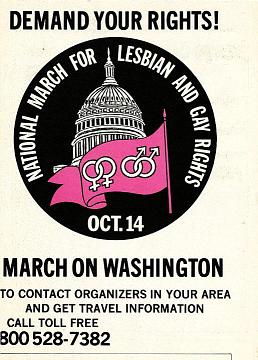 Poster advertising the October 14, 1979 March on Washington for gay and lesbian rights.
National Museum of American History, gift of Ann B. Zill

‹ March on Washington up Teacher Resources ›